Mary of Nazareth is at once the Mother of God and the first, perfect disciple of her son. In her willingness to patiently await the arrival of God’s word in her life, and her subsequent haste in acting upon God’s word, Mary enfolds the pattern of receiving and responding to the Lord within her hidden life of grace. Those who devote themselves to Mary discover the beauty of this hidden life, learning to receive as she receives and respond as she responds. Two of the most beloved modern saints discovered their own sanctity in this Marian rhythm: Thérèse of Lisieux and Teresa of Calcutta.

Childhood devotions to the Blessed Mother shaped the religious imaginations of both Thérèse and Teresa, resulting in a vivid comprehension of Mary as a living mother whose beauty calls for a response of the body and soul. Both proceeded to pattern their lives after Mary, maintaining a posture of generosity to the Lord, participating in the "hasty" bestowal of charity, and thereby experiencing a foretaste of the eternal joy of divine love.


The Blessed Mother’s willingness to offer generous welcome to Jesus was not lost on young Thérèse, whose greatest desire was to offer loving devotion to Christ in each of her ordinary actions. In recalling her preparation to receive communion, Thérèse offers a glimpse of her close relationship with the mother of her Beloved:

I put all my heart into speaking to her, into consecrating myself to her as a child throwing itself into the arms of its mother . . . It seems to me the Blessed Virgin must have looked upon her little flower and smiled at her, for . . . had she not placed in the heart of her little flower her Jesus, the Flower of the Fields and the Lily of the valley?[1]

Thérèse claims her own love for Christ is a gift from Mary. As Mary was made ready to receive Jesus by virtue of her Immaculate Conception, so too does Mary prepare Thérèse to receive Christ. Later, Thérèse will attribute her readiness for life as a spouse of Christ to Mary, for while Thérèse was preparing to take the vows of a religious, “The Blessed Virgin . . . was helping me prepare the dress of my soul.”[2] Even as her time in the Carmel lengthened and she matured in her vows, Thérèse maintained the practice of turning to Mary before Communion:

When I am preparing for Holy Communion, I picture my soul as a piece of land and I beg the Blessed Virgin to remove from it any rubbish that would prevent it from being free; then I ask her to set up a huge tent worthy of heaven, adorning it with her own jewelry . . . It seems to me that when Jesus descends into my heart He is content to find Himself so well received and I, too, am content.[3]

Thérèse reflects upon the image of Mary as the dwelling place of the Word made flesh, prefigured by the Old Testament tabernacle, whose radical openness to receiving Christ into her body fulfills God’s desire to dwell permanently amongst His people.[4] By allowing the Blessed Mother’s intercessory presence to shape her own prayer before the Blessed Sacrament, Thérèse echoes the words of Mary at the Annunciation:  “Behold, I am the handmaid of the Lord. May it be done to me according to your word.”[5] In this first appearance of Mary in the Gospel, we are confronted with Mary’s radical posture of generosity. Established firmly in her identity (I am the handmaid of the Lord), and confident in the goodness of God despite his mysterious and inscrutable tendencies, Mary offers herself as a home for Christ, receiving Him generously, and placing no conditions on his dwelling in her body. It is this radical generosity of Mary which Thérèse sought to imitate, that she might give Jesus a generous welcome in prayer and deed.

“Carry Jesus to Them”


Like Thérèse, Mother Teresa attributed comprehension of her vocation to the Blessed Mother, to whose shrine at Letnica, Kosovo she would make frequent pilgrimage throughout her childhood. In her biography of the saint, Kathryn Spink explains, “By her own admission there were times when she doubted whether she had a vocation, but in the end she was convinced that she was being called to ‘belong completely to God.’ ‘Our Lady of the Black Mountain at Letnica helped me to see this.’”[6] Teresa was asked to embrace the universal call to identify oneself as the “handmaid of the Lord” through the particularity of her religious life.

Her initial response, joining the Sisters of Loretto, was a generous one, yet Teresa maintained a posture of openness to additional requests of the Lord. During what would certainly become the most memorable train ride of her life, Teresa experienced a series of visions revealing Christ’s desire that she dedicate her consecration and active life to alleviating the suffering of the poor, whose bodies reveal the bleeding body of Jesus. In one of these visions, the Blessed Mother appeared to Teresa amidst a group of Calcutta’s poor, charging Teresa to “Take care of them . . . Bring them to Jesus–carry Jesus to them.”[7] The urgent, action-oriented language Mary uses in speaking with Teresa calls to mind, once again, the first chapter of Luke’s Gospel. In the verses immediately following the Annunciation, we read, “Mary set out . . . in haste to a town of Judah where she entered the house of Zechariah and greeted Elizabeth.”[8] As Elizabeth greets her cousin, John “leaped in her womb,” and she expresses her joy and surprise “that the mother of my Lord should come to me.”[9] Elizabeth places the emphasis of her joy on Christ’s arrival in her life, made possible through the immediate, "hasty" visit of His mother.

Teresa would soon claim this haste as her own, for upon receiving this second call, Teresa desired to “carry Jesus” to the poor immediately. In obedience to her religious superiors, however, she awaited permission to leave her cloister. Yet her zeal and haste were not compromised by her patient waiting. In fact, they were strengthened. This is evident in her response once permission is granted: “Father . . . can I go to the slums now?”[10] In patience, Teresa waited for God to prepare the way for her to carry out his will, and once the way was readied, she, like Mary, went in haste.

This pattern of moving in haste would remain with Teresa throughout her life, and become one of the spiritual footholds of her congregation.[11] In words of encouragement to her fellow Missionaries of Charity, Teresa would often reflect on the Visitation and encourage her sisters to embrace this devotion to the constant, active carrying of Jesus: “Like Our Lady . . . let us be full of zeal to go in haste to give Jesus to others.”[12]


When describing the charism of her order, Teresa would point to the Blessed Mother’s ready, responsive rhythm of life: “Our Lady went in haste because charity cannot wait, and we must not lose time or pass by.”[13] Teresa saw an urgency to charity revealed by the woman whose love for Christ, and desire to carry Christ to others, is unsurpassed. Yet this urgency to follow the prompting of the Lord through the exercise of charity, far from becoming a cause for anxiety or agitation, proves to be a source of indescribable joy.[14] In her exuberant, perpetual haste to carry Jesus to the poorest of the poor, Teresa paved the way for God to infuse the resurrecting power of his love into the lives of his children. This was nothing more, and certainly nothing less, than a participatory recollection of the life of Mary, whose generous willingness to offer up her Son for all people contributed to the world’s reception of the source of all joy.

We should not, however, assume that Teresa’s commitment to charity was the result of her own goodwill or theological insight alone. Rather, it was the maternal love of Thérèse, whose very name Teresa chose for herself when professing religious vows, which reared Teresa in this Marian rhythm of charity. While recounting a story describing the difficulties of serving as caretaker for an aging sister, Thérèse reflects on a grace she believes to have received from this less-than-glamorous commitment to charity:

One winter night I was carrying out my little duty as usual . . . Suddenly, I heard off in the distance the harmonious sound of a musical instrument . . . Then my glance fell upon the poor invalid whom I was supporting. Instead of the beautiful strains of music I heard only her occasional complaints . . . I could not believe my happiness. Ah! I would not have changed the ten minutes employed in carrying out my humble office of charity to enjoy a thousand years of worldly feasts.[15]

The gift of joy, which Thérèse embraced through the regular, hasty gift of attention and care to her sister, gave Thérèse a foretaste of the endless charity of God, which we will experience fully only in heaven.[16]

For Thérèse and Teresa, two disciples who chose to pattern their lives after Mary, there was no question of whether they were called to carry the Lord—it was only a question of how, where, and to whom. This is the choice offered to all disciples: to enter into the rhythm of the Blessed Mother, receiving the gift of Christ and moving in haste to share His charity, or to stumble along on our own, working out our own off-beat, dissonant rhythms. The choice is ours, and as Thérèse and Teresa demonstrate, it is the Blessed Mother who will gently and generously guide us in the way of discovering our own mission to carry Christ to others, to give Him away every day, and experience the joy of His faithful return. It is she who, through her guiding wisdom, will gift us with her own haste, spurring us to act with urgency free from anxiety and indecision.

“Charity cannot wait,” and so we must go, giving and receiving the Lord, for in this continual exchange, joy awaits us.[17]

[11] For more on the life of St. Teresa of Calcutta, see Leonard DeLorenzo’s article, “The Saint of Calcutta: Mother Teresa and the Pain of Joy.” 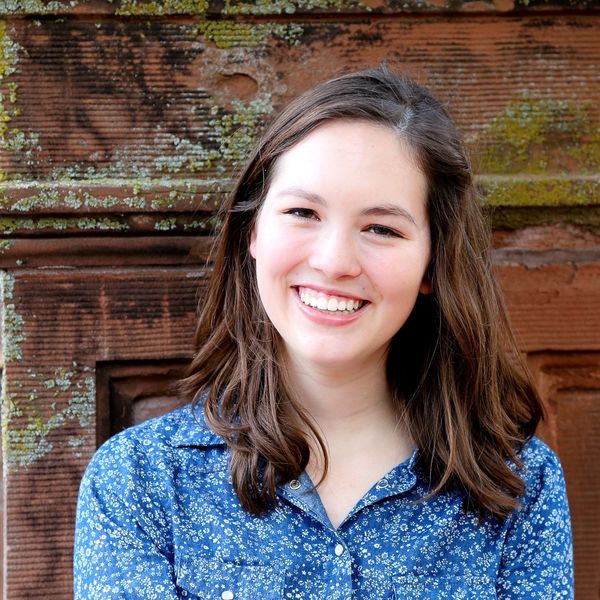 Colleen Halpin is a Church Life Intern at the McGrath Institute for Church Life, who is researching Marian devotions, spirituality, and consecrations throughout the 2017–18 academic year. She grew up in Omaha, Nebraska and is now a senior at the University of Notre Dame, studying Mathematics and Theology.