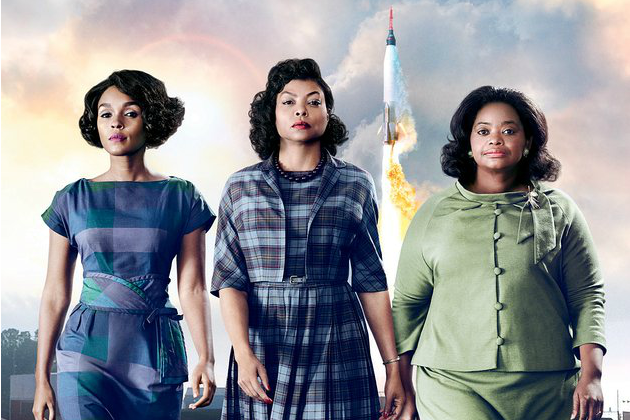 
Oh, I'll tell you where to begin: Three Negro women chasing a white police officer down a highway in Hampton, Virginia in 1961. Ladies, that there is a God-ordained miracle!
—Mary Jackson, Hidden Figures

And with Mary Jackson’s tongue-in-cheek prophetic diagnosis, Hidden Figures revs into full, Technicolor life. A sepia-tinged prologue has identified the central protagonist among our three musketeers—Katherine Johnson—whose patched-together wire-rimmed glasses are two windows into the kaleidoscopic world which she inhabits. For Katherine, the world is knit together in geometric forms; tetrahedrons, triangles, and rhombi camouflage themselves in windowpanes. For Katherine, numbers are the backbone of nature, and she spends each day counting the vertebrae.

Her eyes light up when a teacher asks her to solve a problem and hands her the chalk. He doesn’t simply hand her a blunt stub of chalk, he hands her a sharp sword of possibility, with which she can arm herself against the obstacles of her world.

Hidden Figures’ most remarkable feature is the unabashed hopefulness that permeates the story as its consistent, optimistic heartbeat. Theodore Melfi’s film is a hymn to human accomplishment, a paean to the possible, which, at the dawn of space exploration, seemed to be a limitless category. It’s 1962, the Cold War has yet to climax in the Cuban Missile Crisis, the dapper young Kennedys are still alive and well in the White House, and the country is on the precipice of great achievements, doing what has never even been dreamt of before. Theodore Melfi deftly captures the spirit of possibility that defined the early days of the Mercury program. Progress was sweeping an entire nation off their feet, leaving them breathless in its wake, or frustrated, stifled, and restive as it passed them by.

This situation is aptly summarized in a short exchange between Mary Jackson and her supervisor and ersatz mentor, Mr. Zielinski. He encourages Mary to apply for an engineering program and she responds: “I’m a Negro woman. I‘m not going to entertain the impossible!” Progress may be all around us, in other words, but I’m not included. But in Hidden Figures, hope and possibility always have the last word. “I’m a Polish Jew whose parents died in a Nazi prison camp,” retorts Mr. Zielinski. “Now I’m standing beneath a space ship that’s going to carry an astronaut to the stars. I think we can say we are living the impossible.”

NASA’s mission, quite literally a venture of upward mobility, is firmly juxtaposed with the fixed, motionless position of the women of color working for them. The West Computing Group is on the outer orbit of the campus, far removed from the sparkling marble interiors and wood-paneled offices of the main (white) offices. The women work in a cramped, windowless space, far from any sight of stars.

Yet our three champions each get a chance at upward mobility: Katherine Johnson is given a position in the Space Task Group, calculating essential launch and landing points; Mary fights to get a foothold through an engineering course; and Dorothy Vaughn sees the menacing new IBM monster resting dormant in its lair as an opportunity to get ahead of the technology curve.

In his podcast series Revisionist History, Malcolm Gladwell discusses the phenomenon of “moral licensing” by which the status quo grants inclusion to a token minority, thus absolving the majority of any accusation of prejudice, or compunction of conscience. Any moral quavering can be quelled with the example of “that one time when”; thus, a habit of virtue is abandoned for one token moment which proves us just, allowing only a handful of individuals from marginalized groups to get their foot in the door while leaving the rest out in the cold.

Despite the unfortunate plethora of empirical evidence to prove the point, it’s a pessimistic view of human nature and of the possibility of social change. Hidden Figures is an inspiring example of more noble strains of humanity’s social behavior. Dorothy Vaughn does not take the supervisor position she’s been longing for without first stipulating that the women of the West Computing Group come work for her in the IBM department. As the door opens for her, she ushers others in with her. When Katherine Jackson finally snaps, calling all of her coworkers to task, her boss, Mr. Harrison in response, does not fire her, does not dismiss her, but walks the half-mile to the West Computing Group and tears down the “colored ladies” bathroom sign. “At NASA,” says Mr. Harrison, “we all pee the same color.” It’s a striking gesture of solidarity and justice.

Hidden Figures wraps up the stories of its protagonists with nearly impossibly happy Hollywood endings. A final upbeat montage seems to sweep all troubles into the convenient rubbish bin labeled “The Past.” Perhaps, as viewers, we know this is unrealistic. Humans will not shatter through the glass ceiling of the lunar orbit. The space race will peter to an unheroic halt. The struggle for racial equality continues today. The stars remain impossibly beyond our reach.

But Hidden Figures does not give any of these cold truths the final word. It is a story of ordinary, smart, determined human beings who achieve the impossible. Perhaps it reads history through the lens of fairy tale, but fairy tales are necessary to assure us, as G.K. Chesterton once wrote, not to identify all the dragons that plague us, but to assure us that they can be killed. Hidden Figures insists, with St. Paul, that “hope does not disappoint us” (Rom 5:5), that our response to the world can—indeed should—be hope, our response to injustice can be resilience, and these are not the tactics of the naïve, but the response of the wise. Hope is not the necessary ingredient to bring us to the moon; no, hope reveals to us we are already there.