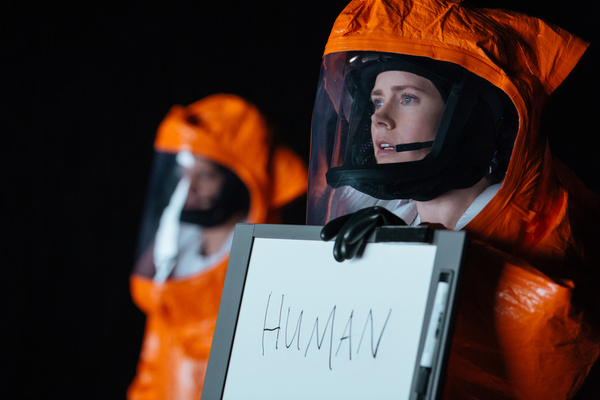 Editors’ Note: In anticipation of the 89th Academy Awards on February 26,
we present a series exploring the philosophical and theological elements in each of the nine films nominated for Best Picture. Caveat: this review contains spoilers.

The film Arrival, starring Amy Adams as Dr. Louise Banks, linguistics scholar, takes the science fiction trope of first contact and explores it from an astonishingly intimate perspective: through the memories and experiences of Adams’ character as she, and the rest of the world, come to know humanity’s new extraterrestrial visitors. Louise, whose life, we see, has involved terrible heartache, is chosen by the government for her linguistics expertise and tasked with finding a means of communication with the visitors: unraveling their language, teaching them our own, and, most importantly, finding out what they want. She is paired with a physicist, Ian Donelly (Jeremy Renner), who is supposed to make sense of the alien technology and scientific knowledge. Instead, he comes to serve as mostly a partner and visual aid for Louise’s communication work. And as they work against the clock to comprehend the alien language and understand their alien visitors, they inevitably grow to be more than just colleagues. But that is only part of the storyline.

Arrival has a number of elements within it that would lead to fruitful theological discussion. It can be understood as a film about welcoming the stranger, the importance of cooperation for a common good, meeting others where they are, and so on. But these things aside, I like to think of Arrival as something much larger. Other reviewers have considered its use of time, or suffering, or intimacy, but I want to consider instead its treatment of mystery.

Christopher Orr of The Atlantic focuses his glowing review of Arrival upon its “epic intimacy,” and with good reason: it frames the story. A deliberate sense of growing intimacy marks the cinematography and the unfolding of the storyline—a closeness with Louise and an entering into her relationship with her daughter is what begins and comes to frame the entire film. But, beyond Orr, Arrival is itself also film about intimacy: growing in intimacy though further communication, mutual understanding, and deepening relationship. But intimacy in this life always has a cost: suffering. Closeness with another and coming to trust and rely upon another opens us up to suffering for the other and, further, pain at the loss of that other. Furthermore, intimacy also requires vulnerability. In Arrival, though, vulnerability is explored less through the fears of individuals and more through military characters and themes: an American general whose cautions about what Louise and Ian might reveal about human life to their alien conversation partners frustrate their attempts at communication; hawkish media voices who stir up deeply-held human fears of the unknown advocate violence for the sake of defense; a foreign military leader whose own defensive nature not only stifles international cooperation on understanding and communicating with the aliens, it threatens worldwide combat with either the alien ships, competing nations, or both. The common science fiction theme of fear of the other—an enemy of intimacy—is not limited to only the extraterrestrial in Arrival.

What has stuck with me in the months since I saw Arrival is how the film’s premise plays with one of the biggest the mysteries of life: what is going to happen? It’s a question that we all ask when faced with big changes: a move, a career change, an illness, a relationship, parenthood, and so on. It’s also being asked with particular urgency in the current political climate. We can guess, plan, obsess, hope, or let go, but as long as our question involves others—who have the annoying tendency to be uncontrolled by our desires—there is little we can do to determine future outcomes that do not rely solely upon our own actions. The future is unknowable, yet we can (and must) confront it, live with it, and experience it. It is a mystery: not a problem to be solved, but an unknowable force that we must encounter. Anyone who has experienced anxiety can tell you how the future looms as a problem to be ceaselessly worried over. And anyone who has overcome anxiety can attest that incessant worrying over the future threatens to drain life in the present of all of its worth.

In Arrival, mystery is honored as mystery: not every question is solved and not every problem is fixed (in both senses of the word: predetermined, but also resolved). This is not the disappointing Interstellar, whose wonder and awe at the universe in a time of deep vulnerability is, by the end of the film, wrapped up in a neat little package of self-salvation: humanity is to blame for the crisis, but somehow humanity can save itself. No, Arrival gives us all the answers and, yet, we’re still left asking questions after the end. What is free will? What makes life worth living? And these questions are asked through the person of Louise, who has been given an extraordinary gift by merit of her entering into relationship with the alien visitors and learning their language. Their peculiar language structure gives Louise insight into the entirety of her life—past, present, and future—in a manner unthinkable according to our customary measures of time and space, cause and effect. And so, we see as the film unfolds that Louise both must make, and chooses to make, heartbreaking, courageous choices in light of this new awareness. And also in spite of this awareness. Louise comes to know the answers to the question, “what will happen?” asked at each moment of her life, realizing at once all of the joy and pain and beauty and loss. She is gifted and cursed with a new mystery: the knowledge of pain and the gift of free will. And she embraces this mystery, this new intimacy with her future, wholeheartedly. Arrival, then, plays out as a woman’s encounter with mystery. The mystery of the other: the alien visitors, her colleague Ian, the political actors who threaten her work, and her daughter. The mystery of knowing and not knowing: the future, the outcome of actions, the beginnings and ends and ups and downs of relationships. The mysteries of life encountered in the intricacies of living. The mystery of intimacy. 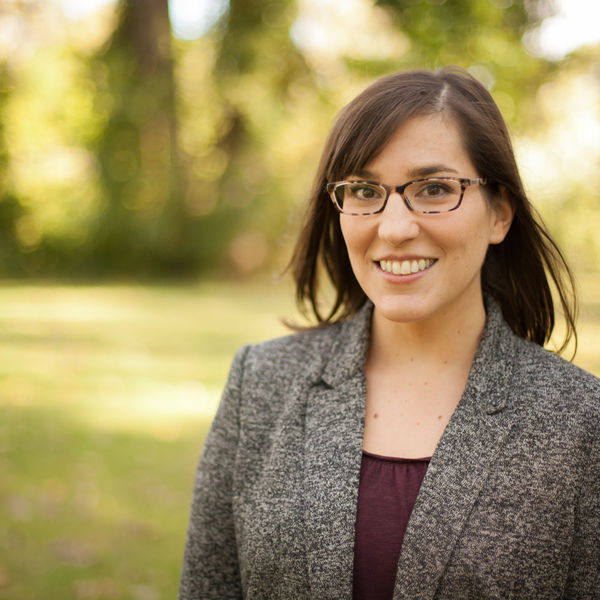 Katharine Mahon is a visiting assistant professional specialist in the Department of Theology at the University of Notre Dame.