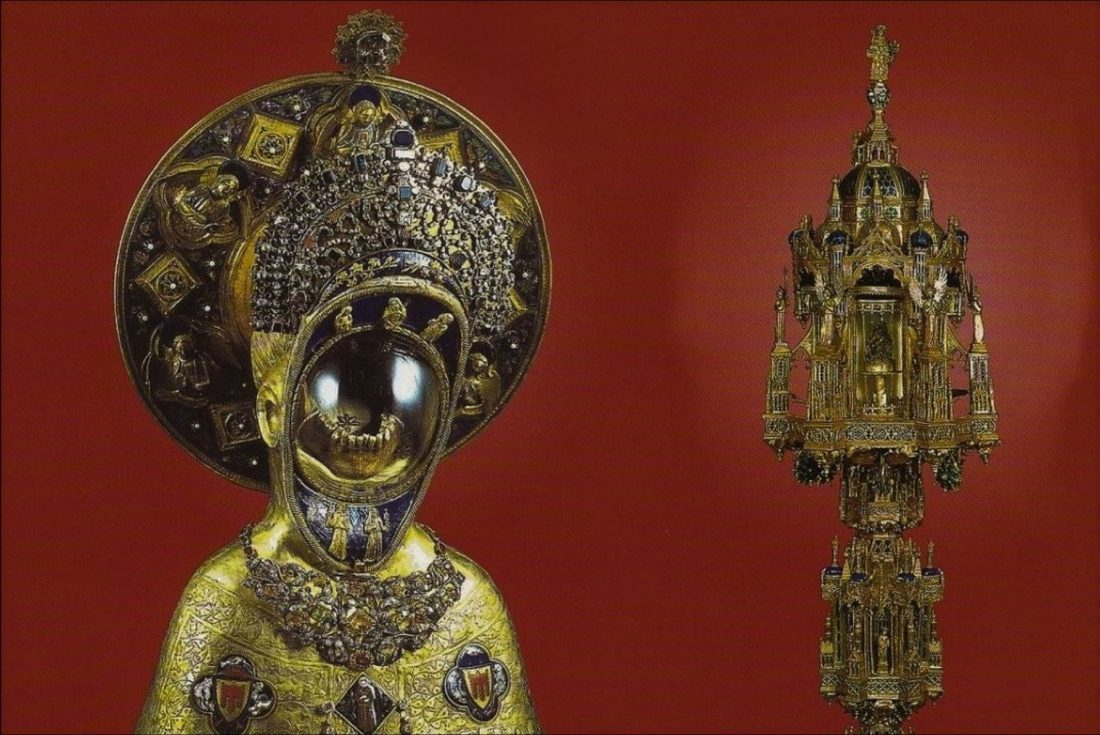 When I was a child, one of my favorite books was My First Book of Saints, which contained some three dozen accounts of holy men and women across continents and centuries who embodied in various ways the love of Jesus Christ. I loved reading the stories of missionaries like St. Angela de Merici and St. Isaac Jogues, but, like many young children, I had a trepidatious fascination with the macabre, and so I was morbidly fascinated in particular with the detailed accounts of the martyrs’ deaths. They read like something out of a fairy tale by the Brothers Grimm. St. Lucy had her eyes gouged out AND THEN SHE WAS BURNED ALIVE! They tried to cut off St. Cecilia’s head AND IT DIDN’T WORK! St. Sebastian was shot with a bunch of arrows AND HE DIDN’T DIE! I can remember relaying these details to my mother, or my friends, or my teachers, reveling in the astonished or even horrified reactions that they generated.

As much as I enjoyed reading and sharing the martyrs’ stories, what I lingered over more than anything were the detailed illustrations that brought their stories to life. There was St. Lucy, luminous with an other-worldly serenity even as the flames in which she stood crept higher and higher. Here, St. Agnes, a girl of twelve, gazing heavenward as her lifeblood flowed from the wound in her slit throat. The images, and the saints themselves, enthralled me, even as they frightened me. Amid my fascination, in the seemingly countless hours I spent poring over the saints and their stories, I wondered within my own heart whether I would ever have the courage even to be a “regular saint” like St. Dominic Savio or St. Jane de Chantal, let alone a martyr like St. Stephen or St. Joan of Arc.

As I’ve grown older and learned more, my childhood fascination with the saints has ripened into an unabashed love for them, because I went from reading the fantastic (and historically iffy) accounts of their lives to getting to know them in their flesh and blood. I read their writings. I prayed the prayers that they prayed. I visited places where they had lived and worked and died. I saw their personal effects: St. Francis Xavier Cabrini’s tiny shoes. St. Francis of Assisi’s tattered (and also tiny) habit. Pope St. John Paul II’s bicycle. Most striking of all, though, I saw the saints themselves: bodies of men and women who had been discovered incorrupt upon exhumation and were subsequently encased in wax or precious metal to be displayed beneath altars—St. Clare of Assisi, St. Bernadette Soubirous. I saw parts of saints’ bodies preserved in reliquaries for veneration and contemplation—St. Anthony of Padua’s tongue, St. Catherine of Siena’s head, St. Francis Xavier’s arm. These were no mere pictures. These were the actual bodies (or parts of them) in which these men and women had lived out their faith in Christ. These were the bodies that had been disciplined through fasting and prayer; the bodies brought to the point of exhaustion in ministry to the poor and care for the sick; the bodies beaten and tortured and killed—all for the sake of imitating the self-giving, sacrificial love of Jesus Christ. And these are the bodies that will be raised again in glory when Christ comes to judge the living and the dead.

In the Basilica of the Sacred Heart here at Notre Dame, there is a side chapel containing several hundred relics. I remember well the day I brought my younger sister and brother to the Basilica for a tour, and while they enjoyed the gorgeous murals and the stunning stained glass, they were utterly fascinated by the reliquary chapel, reminding me of my own movement from image to embodiment, from art to relic. They pored over the charts providing the location for each saint’s relic, searching out their namesakes and their confirmation saints, then peering through the glass case to gaze at the tiny monstrance holding the bone fragment or strand of hair or drop of blood. The three of us stayed in that tiny space for well over an hour, and with every passing moment, the stories of the saints became less abstract, their sacrifices became more real, their witness became more compelling.

To the outside observer, the Catholic practice of collecting, displaying, and venerating relics may seem to venture into the superstitious at best, the phantasmagorical at worst. What kind of crazy religion keeps tiny fragments of bone or bits of hair or drops of blood on display, to say nothing of venerating them? The kind of religion that believes that sacrifice does not take place in the abstract, but is lived out concretely, in and through the body. In its affirmation of placing relics under an altar, the Directory on Popular Piety and the Liturgy explains this connection quite clearly:

[Placing the relics of the Saints under an altar] signifies that the sacrifice of the members has its origin in the Sacrifice of the altar [the Eucharist], as well as symbolizing the communion with the Sacrifice of Christ of the entire Church, which is called to witness, even to the point of death, fidelity to her Lord and Spouse (§237).

We honor the relics of the saints because we honor their fidelity to Christ, and their imitation of his perfect sacrifice on the Cross. We place their relics under the altar because their sacrifice was only made possible through the grace they received in the Eucharist, the re-presentation of Calvary. We venerate their arms and tongues and blood because we too are called to reach out our hands to the poor, to speak Christ’s words of everlasting life, and to pour ourselves out like a libation (cf. 2 Tim 4:6), to “offer our bodies as a living sacrifice, holy and pleasing to God, our spiritual worship” (Rom 12:1).