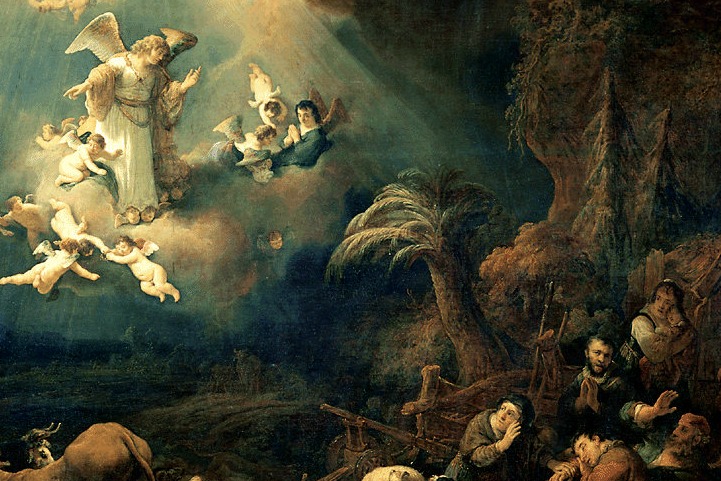 Heaven and Earth are full of your glory

Blessed is He, who comes in the name of the Lord


Even though I’ve recited that prayer thousands of times in my liturgical life, to recall the words correctly here I had to sing. The musical theme I recalled this time was the classic Mass of Creation setting, which surprised me—in G minor, it is a bit dismal and has never been one of my favorites. But I learned to sing this setting of the Sanctus as I learned to speak. In a way, it’s my liturgical-musical infancy narrative.

The Sanctus draws us into the Infancy Narratives by inviting us to sing with the angels. Luke 2:8-14 tells of an angel coming to the shepherds as they work in the fields, shining with the glory of the Lord on the night of Christ’s birth. After proclaiming this good news to the shepherds, the angel is joined by a chorus, and together they sing glory to God. We repeat their song of praise in the Introductory Rite—just as the praise of the angels heralds Jesus’ earthly life in the Gospel, we sing the Gloria at the start of the Mass to announce our liturgical memory of Christ’s sacrifice.

The Sanctus invites us to sing the words of the angels again, but these specific words come from Biblical visions, not the Gospel. The first occurs in Isaiah 6:3, when Isaiah has a vision of God, seated in the Temple. Angels attend to God, but as they fly near the Divine they cover their faces. Even though they are holy beings, the greatness of God’s glory is too close for them to experience. This intimacy prompts them to sing praise. Similarly, when we sing the Sanctus, we are moments away from encountering God in the Eucharist. By singing the words of the angels, we remember that even if the bread and wine as Body and Blood appear lowly, they are the true presence of God—and in a few moments, we are invited to hold God in our hands.

The Sanctus makes another Biblical appearance in Revelation 4:8, where John says that four creatures (symbolizing the four evangelists) sing the refrain “day and night without ceasing.” What’s more, a group of elders bow down and worship whenever they hear the praise of the creatures…which is all the time. So in this scene, two groups that appear formidable are not receiving any glory—rather, they are casting their crowns aside as they glorify the living God.

By proclaiming the Sanctus, we enter into this same glorification. We are also invited into community and harmony as we sing. We become one with the other members of our congregation; with people throughout the world, who are praising God through the universal Mass at that same moment; and with the angels, whose entire existence is ordered towards God’s praise. Can our momentary praise be enough?

“Holy, holy, holy,” we repeat three times. Are three repetitions enough to express the holiness of God when the angels live in constant praise of God’s unending glory? No, but through the Sanctus, we are invited into the angel’s refrain for a brief moment. By joining in their melodious praise, we are preparing to join for a moment in their continuous adoration: to glimpse God’s glory in the Eucharist.

Rose Urankar is an Undergraduate Fellow in the Center for Liturgy. She studies Theology and American Studies.