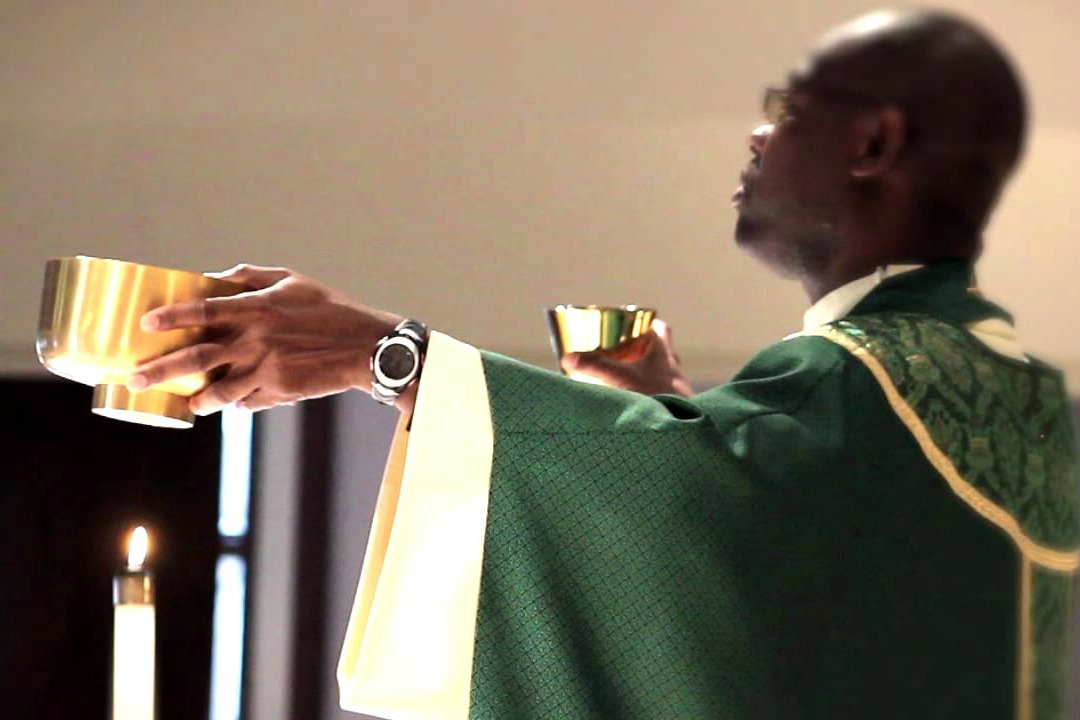 Every Eucharistic Prayer concludes with the Doxology and the Great Amen. In this solemn, powerful moment, the presider holds aloft Jesus himself, truly present in the Eucharistic species, and proclaims:

Through him, and with him, and in him,
O God, almighty Father,
in the unity of the Holy Spirit,
all glory and honor is yours,
for ever and ever.

In that moment the Church is doing what Christ did and forever does: she offers his one body, to which she has been joined [by the power of the Holy Spirit], to the Father for the glory of his name and for the salvation of the world. This is our communion in the sacrifice of Christ. This is perfect praise. (What Happens at Mass, 106)


Doxology. Perfect praise. In this moment of the liturgy, through our union with Christ and the power of the Holy Spirit, we are restored to our original vocation of the homo adorans, the priestly creatures whose vocation has always been and will always be praising God our Creator by receiving creation as gift and offering it back as Eucharist (see Alexander Schmemann, For the Life of the World).

In response to this Trinitarian prayer of perfect praise, we are instructed in the Roman Missal, “The people acclaim: Amen.” The verb acclaim indicates what sort of response we are to make in this moment. We are to declare “Amen” with every fiber of our being, to affirm that, yes, we are offering ourselves to the Father in union with Christ through the power of the Spirit. We fulfill our vocation as Christians in precisely this way. Again, Driscoll emphasizes the magnitude of this moment: “To all that Christ has done, to all that is happening, the assembly cries out a resounding Amen. This is the biggest Amen of the Mass and so is the biggest Amen in the world. . . . This Amen contains all others” (107–8).

It’s one thing to read this on paper or to acknowledge it in theological reflection; however, when it comes to this moment in the practice of actual liturgical celebration, often the Doxology or the Amen or both are utterly underwhelming, almost afterthoughts to the institution narrative of the Eucharistic Prayer. In order to give the Doxology the solemnity it demands, and in order to allow the people to acclaim their “Amen” with their full dignity and attention, I would argue this liturgical moment ought always to be sung, even in a daily Mass. Musically gifted presiders may learn and sing the chant in the Roman Missal; those less comfortable in their singing abilities may still sing the Doxology recto tono (on the same pitch throughout), and then the people may reply with either the Amen from a familiar Mass setting, or they may simply sing the simple chant Amen, which consists of exactly two adjacent notes. Singing the Doxology and Amen will imbue this part of the liturgy with greater beauty and dignity, fulfilling the end of liturgical music itself by “making prayer more pleasing, promoting unity of minds, [and] conferring greater dignity on the sacred rites” (Sacrosanctum Concilium, §112).

Indeed, as Joseph Ratzinger (later Pope Benedict XVI) reminds us: “Wherever people praise God, words alone do not suffice” (A New Song for the Lord, 111). In the face of so great a love—a love that gives unto the end, a love that continues to pour itself out for us by remaining with us always, a love that draws us into the very communion of divine life—how can we respond any other way than by singing out our “Amen”?