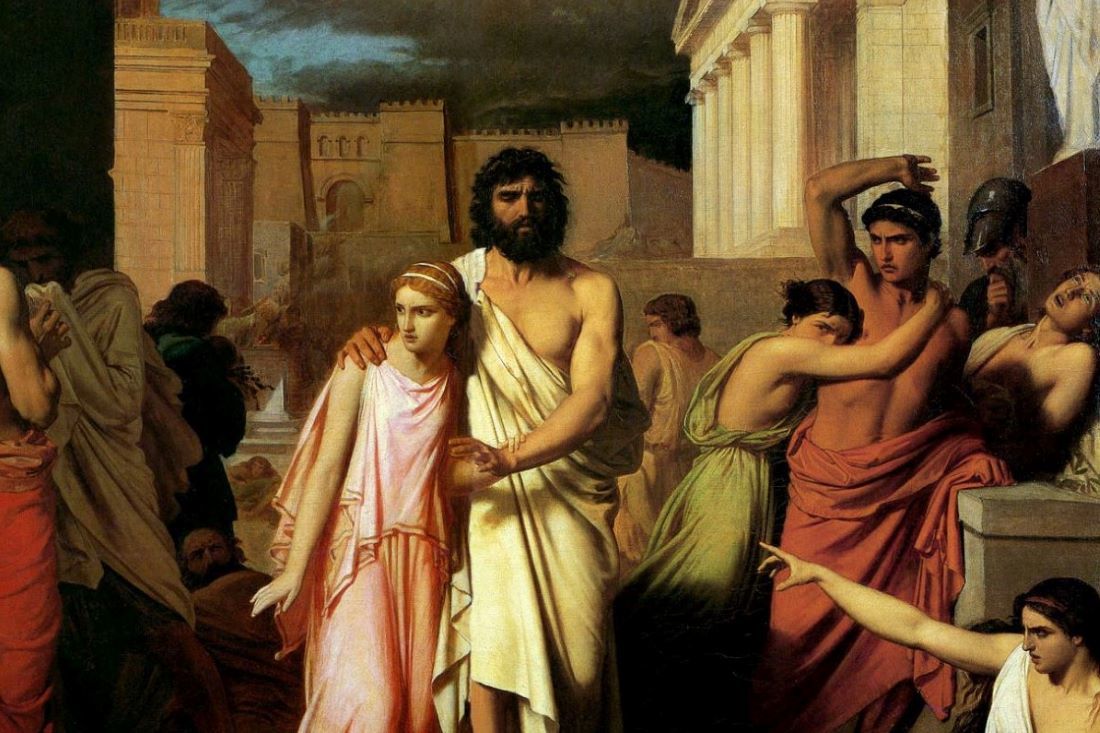 But I shall describe its symptoms by which
anyone who knows them beforehand may recognize this disease
should it ever reappear.
—Thucydides, The Peloponnesian War, II. 48[1]

A plague has befallen the city. Whatever threat or fear lies beneath has not yet become visible, but it will for such is the nature of this sickness as to reveal what lies hidden underneath the luster of appearances. For a sickness is a symptom, and a symptom is nothing else than the manifestation of what remains invisible because it is hidden inside the body—or, to be precise, hidden by the body. We owe to sickness whatever knowledge we have of the body. A sickness such as this is therefore an opportunity to look deeper than skin-deep appearances.

It is a plague that sets Oedipus Rex in motion. A plague has befallen the city. Of course, a plague is not just any disease: it is an infectious disease—that is a disease that manifests itself not on the body of the individual but through a communal infection. Plague, for Sophocles as later for Camus, does not affect so much the individual qua individual as their relationships—insofar as one belongs to a community and precisely on account of that community.

It was appalling how rapidly men caught the infection; dying like sheep if they attended on one another; and this was the principal cause of mortality.[2]

As a political disease—the plague appears to be both epidemic—that is, adventitious, coming from the other outside my body—but also endemic—from inside the metaphorical body of the polis, the body politic, as a sickness of the same. For the polis by extending the right to its citizenship to each of its members appropriates them all to itself (even those excluded from it are excluded by reference to it). Whatever is not in the city and of the city is its other. The polis founds itself upon this exclusion.

As the city appropriates its citizens by gathering them into one, common, political place and forming them into one “body,” so, there are times when the citizens appropriate the city by considering it as an extension of themselves that exists by virtue of satisfying their wishes. In such times, the identity of the polis, its unity and community, becomes hidden—first of all, from the citizen’s sight—for the individual rarely is able to see anything beyond his nose. In his description of the plague, Thucydides discovers precisely this oxymoron—that there is in the city a citizen who is now an individual[3]:

Whatever pleasure was hitherto concealed, was now done boldly. For, seeing the sudden change—how the rich died in a moment, and those who had nothing immediately inherited their property—they considered that both, bodies and monies are ephemeral, and they resolved to haste their enjoyments and to think only of pleasure. Who would be willing to sacrifice himself to the law of honor when he did not know whether he would ever live to be honored? A moment’s pleasure and any sort of thing which conduced to it became both good and useful. Neither the fear of god nor the law of man deterred them. Those who saw all perishing alike, thought that whether one believes in god or not made no difference. For offences against human law no punishment was to be feared; no one would live long enough to be held responsible. Already a far heavier sentence had been passed and was hanging over their heads; before that fell, why should they not take a little pleasure?[4]

The dramatic tenor here can be misleading. For in expecting to read an account of a disease that “no words can describe” and which “was too much for human nature to endure,” as Thucydides, forgetting his characteristic sobriety, puts it, we come to realize that the behavior meant to portray the calamities of the plague is nothing new. On the contrary, it is a very familiar picture of how people have always behaved or, at least, have always wished to behave. The plague has only uncovered this picture and left it out there for all to see.

The plague comes to remind that individual of what, by means his individuality has so successfully forgotten, namely, that the city is a community which if it cannot make itself known by its benefits then it will do so by its dangers. For as long as any restriction is imposed on the individual’s enjoyment, on the travels and business of its citizens, all is left for them is the inconvenient reality of sharing the space of polis with others and with their fate—even unto death. Albert Camus comments:

They thought that everything still was possible for them; which presupposed that pestilences were impossible. They went on doing business, arranged for journeys, and formed views. How should they have given a thought to anything like plague, which rules out any futures, cancels journeys, silences the exchange of views. They fancied themselves free, and no one will ever be free so long as there are pestilences.[5]

The difficulties of our new reality—restrictions in travel and mobility, restrictions in the availability of various goods, limitations imposed on work and pleasure—are precisely the difficulties that await the individualized citizen as the plague forces him to accommodate others while he rehabilitates himself in the space of the political.[6] One can live with others only to the extent one also lives for others. If I do not live for others, then living with others is hell (case in point, Sartre’s No Exit).

Oedipus’s fatal encounter with his father at the crossroads outside Thebes signifies that every murder is potentially a patricide for every other is always the parental other—the other who gives birth to me since I cannot be my own origin. Similarly, every returning upon oneself (cor curvum in se) constitutes a form of incest. Jocasta is for Oedipus an other bereft of otherness; an other upon whom I have projected my own familiar image, that is, my expectations, my feelings, myself. Such a projected “other” is nothing but a mirror that reflects back my own reflection and therefore my relationship with such an “other” is deeply incestuous. The recognition of this double crime will break down the imaginary self and will “give birth” to a new identity (“this day will give you birth and kill you;” verse 438).

And yet, can I live for others when I live in the city? Where is the encounter with otherness to take place in the homogenized space of the polis? Did we not just say that the polis founds itself upon the exclusion of (its) other? The other who is, like the Sphinx, kept at bay beyond the city borders, beyond pleasure and its principle, other than life? If the proper place for philosophy is the city, as Socrates insists in the Apology, that is because philosophy is the study of death and dying, as that same Socrates claims in the Phaedo. Isn’t it because of this—because the role of philosophy is to keep uncovering the political concealment of lēthe and lathos—that the dialogue on the political must end in Hades as in the last book of the Republic?

If there is anything we can learn of what it means “to be in hell” from the stories about Hades, that is only this: time in hell does not run but remains static, a monotonous nunc stans. The stories of Sisyphus, Tantalus, Ixion, and the Danaids (one could also add to this list Prometheus) offer unanimous witness to this observation. Even though their punishment in Hades takes different forms, the root of their torment remains the same: the futile effort, the attempt to satisfying a desire without success over and over again.

“So you haven’t understood yet?” Rambert shrugged his shoulders almost scornfully.

In Hades time does not move forward, in fact it does not move at all; it falls back upon itself in a semblance of movement that is nothing else than an everlasting present. Remove this element, and there is no punishment anymore.

The enigma of the Sphinx had opened up for the polis the horizon of time—in fact it was nothing less than an invitation to think man’s existence as stretching from past to future, to think the present as a present offered by the past for the sake of a future and to think the one in terms of the other, to see, that is, the past under the light of the future.[8] Having solved the enigma of time, Oedipus closed his being and that of the city in the present—and thus they live, as Creon aptly says, trapped in the isolated now. Asked why the city did not investigate the death of Laius, Creon replies that “we were compelled to attend to what lies at our feet” (τὸ πρὸς ποσὶν σκοπεῖν, verses 130–131) that is, to an instantaneous present that unfolds into a series of “nows” without ever forming a memory or becoming one’s past.

Some again had no sooner recovered than they were seized with a forgetfulness [lēthe] of all things and knew neither themselves nor their friends.[9]

The citizens of Oran, too, had “forced themselves . . . to cease looking to the future, and always to keep, so to speak, their eyes fixed on the ground at their feet.”[10] And as Camus later explains:

Without memories, without hope, they lived for the moment only. Indeed the Here and Now had come to mean everything to them. For there is no denying that the plague had gradually killed off in all of us the faculty not of love only but even of friendship. Naturally enough, since love asks something of the future, and nothing was left us but a series of present moments.[11]

It is precisely an unacknowledged past or an unexpected future that returns—in the form of disease—to plague the present. Indeed, not only does it return in the form of the plague but also it returns with the urgency of a responsibility that demands to be assumed insofar as the plague has now made the private citizen public and the individual political.

[6] This is why, as we have now seen, authoritarian regimes, to the extent that they suppress significantly the individuality of the citizen, are better suited in containing and controlling the political infection. However, one’s ability to share his freedom with others is genuine only when exercised freely. I would like to thank Jean-François Garneau for leading me to this point.

What is that animal that
In the morning walks on the four,
At noon on two feet
And at the evening on three?

Oedipus’s answer was only a word: man. A word that, strangely, referred back to him, insofar as he was his answer. In retorting against the monstrosity of the Sphinx with the humanity of man, one could feel tempted to say that Oedipus becomes the first humanist, and in doing so solely with confidence in his reason, he also becomes the prototype of a rationalist as well. If, however, Oedipus succeeds in solving the Sphinx’s enigma, this is because he thought of a particular characteristic of man and his existence: he conceived of man in his timely manifestation—of the human being as projected in the horizon of time. For it is precisely time that the three periods of the day (morning, noon, and evening) indicate. Oedipus thinks of man as that being that persists in temporality—he thinks, in other words, of being and time. 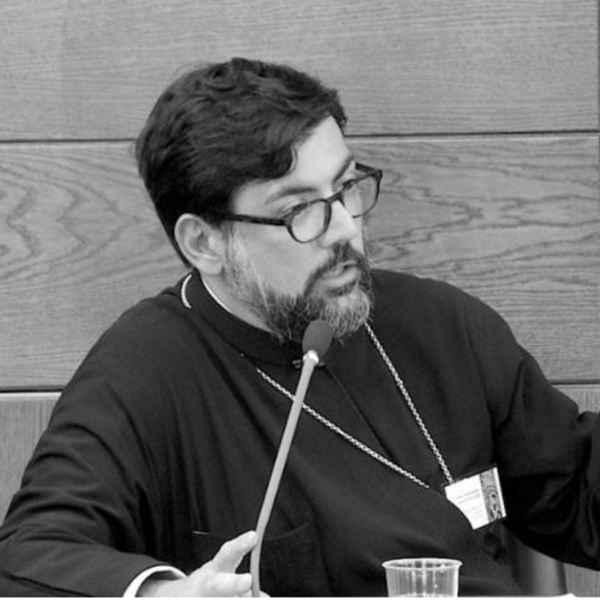 Friendship With God After a Time of Tragedy 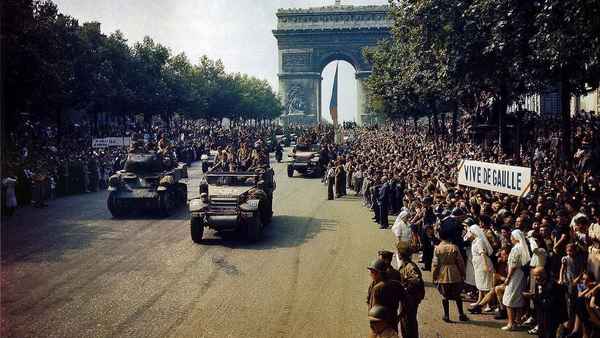