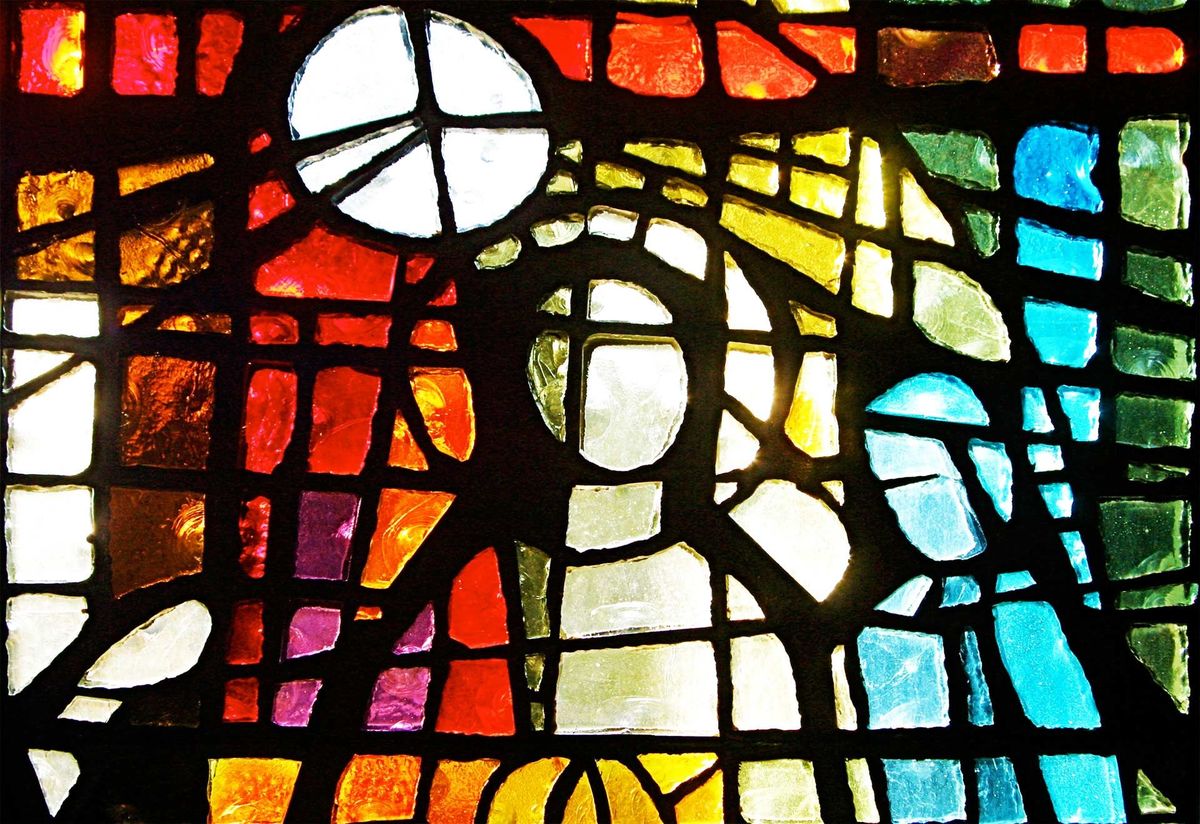 "If I sit in the side aisle of the Basilica, I can see clearly the stained glass window I eyed suspiciously years ago, a window I can now trust like an old friend: each little piece, fit into place slowly and creatively, as light shines steadily through."

Visit here to listen to Notre Dame senior Madeline Lewis tell the story of finding the grace to trust the intricacy at play in her life. Subscribe to the free Stories of Grace podcast on iTunes U and receive automatic notifications when a new story is published. The full text of Madeline’s reflection is below.

For almost three years now, I have been the proud owner of an imaginary dog.

Or, co-owner, I should say.

Let me explain: at the beginning of my sophomore year, in late August, on the first day of class, I met a boy with a backpack that I really liked. It was a burnt-orange colored backpack, with a tiny plush gorilla keychain hanging off of one of the front zippers. What a nice backpack, I thought, on that day. The next class, I noticed he had a water bottle that was blue. What a captivating blue water bottle, I thought to myself, subtly attempting to sit next to him. When I sat next to him, I noticed he took notes in a plain black notebook. What an amazing black notebook, I thought, immediately endeared to the way his handwriting looked on the page. And then, as I left class, I realized that maybe the reason I was so fond of Michael’s particular backpack, notebook, and water bottle was because I was particularly fond of him.

So I did the thing everyone does when they realize this: I tried to talk to him while at the same time acting approximately 80% more awkwardly than I would under normal social conditions. This is what happened: Michael said some normal human sentence with the word “fathom” in it. To which I said, inexplicably, “Wow! Fathom! That would be a great name for a dog!”. To which he said, weirdly affirmingly, “Yeah, I think we own that dog together!”. I considered this exchange wildly successful: for, by the end of class, I had emerged as part of an imaginary dog co-ownership partnership with my crush. Which, as we all know, is just a roundabout hop, skip, and jump away from actual dating.

We really committed to the imaginary dog bit: I’m not totally sure about this, but I am definitely willing to wager that we might be the only two humans who have begun dating by messaging back and forth about the care and keeping of an imaginary dog. I’ll spare you all the intimate details, but just know it involved negotiating dog food purchases and lamenting puppy potty-training failures for a way-too-extended period of time.

Thankfully, over the past few years, we’ve added a few more conversation topics to our rotation than just imaginary pets. But, I could never have imagined that at the time. In fact, at the time, I couldn’t imagine how a relationship with Michael could possibly unfold. A few weeks into knowing Michael, and knowing how much I cared about him, my mind wandered while attending a rosary service at the Basilica. As the congregation spoke Hail Mary’s, my eye studied one of the intricate stained glass windows through which light was pouring steadily. In a few weeks, Michael would study abroad. After he came back, we’d be on campus briefly for a semester before it would be time for me to go abroad. While I was abroad, he would graduate. Holding together a relationship over such wide pieces of distance seemed unimaginable to my little heart. Even as the prayers of the rosary unfolded around me, I eyed the deep red and pink rays of the window suspiciously, thinking of how hard it is to fit so many intricate pieces together. I couldn’t fathom that there could be the same sort of intricacy at play in my own life.

Somehow, the very things that I couldn’t even imagine gloriously unfolded anyways. Six months later, after Michael had come home from Spain, we temporarily upgraded from an imaginary dog to a real one as we walked my family’s border collie around campus one summer afternoon. As the sun began to set, we paused to sit down in a grove of trees near the lake through which light was pouring steadily. Michael and I talked about how we would end up in the same place one day: the clearest dream with the most unclear logistics. We talked together about possible post-grad programs and places, wholly unsure at what point our geographical location would be mutual. Our conversation didn’t end in us figuring it all out, but rather, in us, not knowing our future, calmly and quietly watching the sunset sky turn to deep reds and pinks.

I still think Fathom is a great name for a dog, and Michael and I still don’t live in the same place. In my room, I have a calendar on which I excitedly circle days we plan to visit each other in deep red and pink markers. On my bookshelf sits a journal filled with letters written during months we were in different countries. On my computer is the open FaceTime application, but more than that is the openness to consoling, caring, and communicating without the luxury of physical presence. In all of these tiny, beautiful things, I cannot help but see an unfathomably loving intricacy at play: the grace of a hand who has drawn together a relationship piece by piece, place by place. This is the hand that has guided me from the care and keeping of an imaginary dog all the way to the care and the keeping of real and patient hope. This is the grace of a God who asks me to look at the intricacy of a stained glass window, and of my own unfolding life, with wide, curious eyes rather than squinted, doubting ones: to be able to exclaim with hope rather than skepticism, “How beautiful!” rather than, “How unlikely!”. If I sit in the side aisle of the Basilica, I can see clearly the stained glass window I eyed suspiciously years ago, a window I can now trust like an old friend: each little piece, fit into place slowly and creatively, as light shines steadily through. Because I am human, the way that the story of my life will unfold will always remain unfathomable to me. But I am learning that it is far more wildly delightful, far more playful, to instead entrust my love, my imagination, and my hope to the One who has already fathomed everything. This is how the light pours in, in deep reds, and deep pinks.