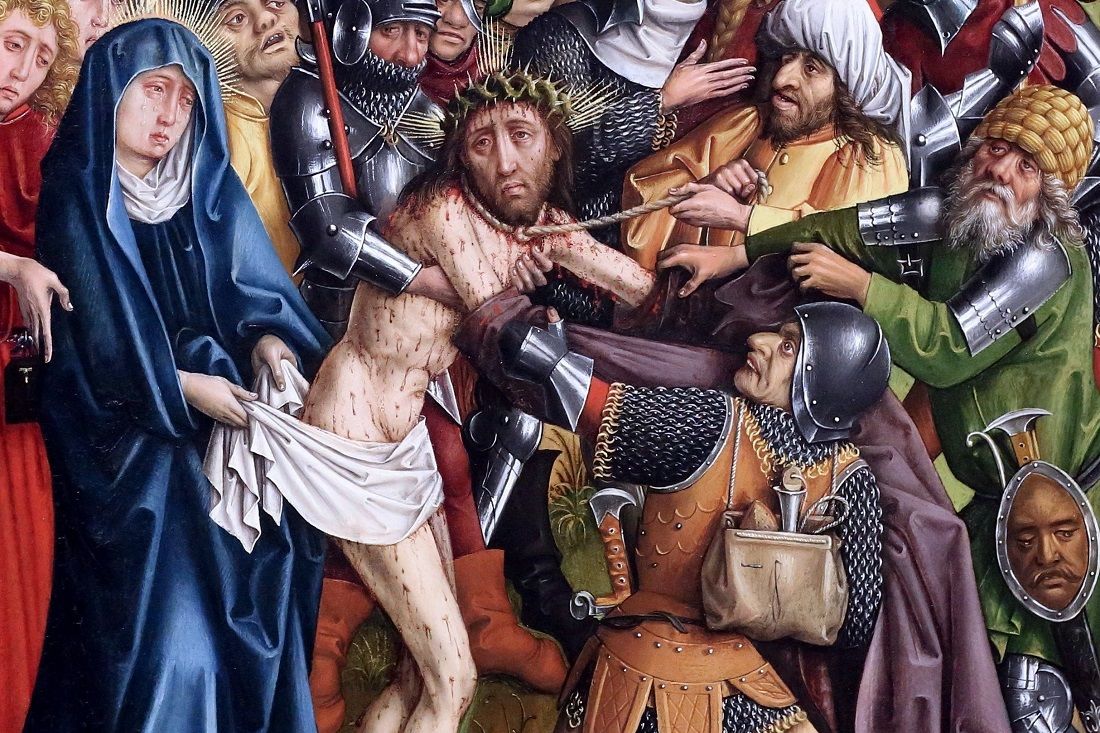 Throughout this Holy Week, we are going to be sharing a series of poetic meditations on the Stations of the Cross by Malcom Guite. An Anglican priest-poet currently serving as Chaplain of Girton College at the University of Cambridge, Guite has published eight books of his poetry, with two more forthcoming. His collection Sounding the Seasons comprises sonnets composed for various feasts and seasons throughout the liturgical year, including this series. We are grateful for Guite’s kind permission to share these sonnets on Church Life Journal.

Whereas Jesus’ first and second falls were followed by moments of tenderness in the encounter with his Mother and the women of Jerusalem, this third and final fall is followed by the beginning of the end as Jesus is stripped by the soldiers who prepare him for his Crucifixion. And yet, this end, this Death toward which Jesus draws ever closer, is not the end; rather, it is the beginning. For though the soldiers strip Jesus of his garments and his tunic, they cannot strip him of his identity—even in this humiliation, Jesus clings to the knowledge that he is the beloved of his Father, the Only-Begotten Son of God. In his naked poverty, Jesus shows us the depths of our dependence on God. Rooted in his sonship, grounded in love, Jesus teaches us to strip away all of the false identities to which we cling and beckons us to embrace the only identity that truly matters: the identity we share in him as a beloved son or daughter of God.


IX. Jesus falls the third time
He weeps with you and with you he will stay
When all your staying power has run out;
You can’t go on, you go on anyway.
He stumbles just beside you when the doubt
That always haunts you cuts you down at last
And takes away the hope that drove you on.
This is the third fall and it hurts the worst,
This long descent through darkness to depression
From which there seems no rising and no will
To rise, or breathe or bear your own heartbeat.
Twice you survived; this third will surely kill,
And you could almost wish for that defeat
Except that in the cold hell where you freeze
You find your God beside you on his knees.

X. Jesus is stripped of his garments
You can’t go on, you go on anyway.
He goes with you, his cradle to your grave.
Now is the time to loosen, cast away
The useless weight of everything but love.
For he began his letting go before,
Before the worlds for which he dies were made,
Emptied himself, became one of the poor,
To make you rich in him and unafraid.
See, as they strip the robe from off his back
They strip away your own defences too,
Now you could lose it all and never lack,
Now you can see what naked love can do.
Let go these bonds beneath whose weight you bow,
His stripping strips you both for action now.