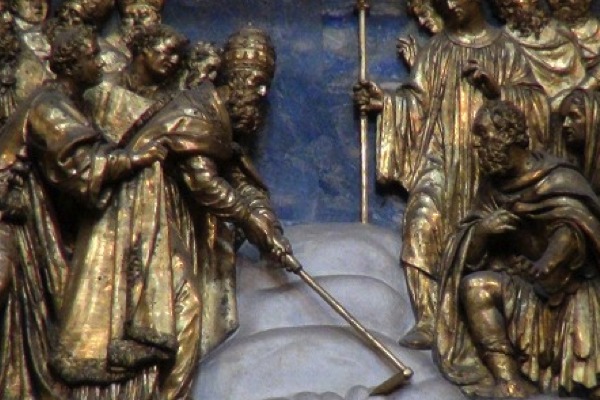 Imagine a quick snowfall on an otherwise brutally hot day in August. By all accounts, that’s exactly what happened on the morning of August 5, 352 upon the Esquiline Hill in Rome! Legend tells us that a childless aristocratic couple had asked the Blessed Virgin Mary to show them a worthy cause to which they could donate their fortune. This couple, John and his wife, was privileged to be visited by Our Lady in a dream on the night from August 4 to August 5, during which she asked for a church dedicated to her. As a sign, the exact location would be marked out in snow. During that same night, Pope Liberius (352–366) received the identical message in his sleep; so that at dawn, the pope—accompanied by his entourage, the couple, and many others—witnessed the unusual event of snow glistening in the August sun on the highest peak of Rome.

Not only did the snow indicate the location of the church, it also allegedly marked the contours of the future church which was completed within two years and consecrated by Pope Liberius. To this day, the people of Rome commemorate this extraordinary event of August 5, 352 A.D., which has now become the Memorial of Our Lady of the Snow. During the Eucharist in the morning and Vespers in the evening, the miracle is reenacted when the paneled ceiling above the main altar opens and white jasmine petals rain on the assembly. The euphoria of the faithful trying to catch a few petals as a souvenir is a sight to behold and paralleled only by the pouring of red rose petals, symbolizing the fiery tongues of the Holy Spirit, from 44 meters above in the Pantheon of Rome on Pentecost, a tradition dating back to 609.

The church honoring Our Lady of the Snow was destroyed in 366. Pope Sixtus III, reigning from 432-440 had it rebuilt and embellished as a memorial of the recently concluded Council of Ephesus, which promulgated the dogma of Mary as Theotokos, the God-bearer, in 431. From the seventh century onward, the church was referred to as St. Mary Major. It enshrines the picture of grace Salus Populi Romani (Salvation of the Roman People) commemorating Our Lady’s protection during the plague of 590. Above this icon hovers the relief depicting the Miracle of the Snow (as shown above). Another famous treasure venerated in the Basilica is the reliquary with five pieces of wood from Jesus’ crib. For visitors from the Western hemisphere, it is another link to Our Lady of the Snow!

Rome’s largest church dedicated to the Virgin Mary, Mary Major is one of the four Roman Papal Basilicas. It has a relatively new Holy Door, which was blessed by John Paul II on December 8, 2001. Its right panel shows the Resurrected Christ modeled after the image on the Shroud of Turin, who appears to Mary, represented here as Salus Populi Romani. In the upper left corner is depicted a representation of the Annunciation at the Well, a story drawn from the apocryphal Gospel of St. James (second century), and on the right can be seen an image of Pentecost. The lower panels display the Council of Ephesus on the left, and on the right, the Second Vatican Council after which Pope Paul VI declared Mary as Mother of the Church. St. John Paul II’s Papal coat-of-arms and his motto Totus Tuus are positioned at the center on the top of the Porta Santa.

Pope Francis, whose custom is to visit the Basilica before and after traveling abroad, chose January 1, 2016, the Solemnity of Mary the Mother of God, to open the Holy Door to welcome the Extraordinary Year of Mercy. In his homily, the Holy Father addressed Our Lady with the ancient Marian antiphon Salve, Mater Misericordiae, Hail, Mother of Mercy! For him this title includes the sentiments we most expect of the Mother of God who is also our Mother in the order of grace. The Pope encouraged all to walk through the Holy Door of Mercy “with complete trust and freedom from fear; (and to) leave this Basilica knowing that Mary is ever at their side.” This assuredness, Pope Francis calls a grace that “frees the heart to look to the future with the joy born of hope.” It is the message of the Psalm: “Create in me a clean heart, O God, and put a new and right spirit within me. […] Restore to me the joy of your salvation” (51:10,12).

The story of a dream that turned into a modest church and ultimately into the Mother of all Marian Shrines proves that God can write straight on crooked lines. The first mention of the legendary snowfall in August of 352 can be traced to the twelfth century, long after the original church dedicated by Pope Liberius had vanished. Nevertheless, the invocation given to Our Lady of the Snow has spread to the whole world. Snow is a symbol of purity and virginity, and it has been associated with Mary, especially with her Immaculate Conception. Mary’s sinlessness makes her the prototype of the clean heart, described in Psalm 51. As Mother of Mercy it is her privileged task to intercede for us the graces necessary to experience the joy of salvation. Let us take advantage of this gift, by reaching out for the white petals being showered upon us!