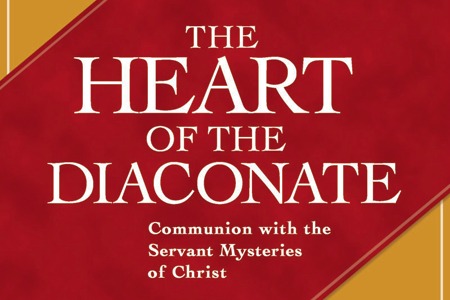 Deacon James Keating’s The Heart of the Diaconate: Communion with the Servant Mysteries of Christ is a gift to the Church. His book is fruitful reading not only for deacons, bishops, and priests, but also for anyone in or involved with diaconal formation. The author, a theologian whose daily work is the formation of priests and deacons, is uniquely qualified to write a book on what is at heart of the diaconate. At the heart of the diaconate is communion with Christ through his servant mysteries, chief among which is the Eucharist, the truest expression of and so the only starting point for diakonia.

Keating’s book is comprised of an introduction and conclusion with three chapters in between. These three chapters cover discerning the call to the diaconate, the period of formation leading to ordination, and diaconal ministry. In my view each of these chapters is worthy of a book.

One thing about which Keating changed my mind is the necessity of the transitional diaconate for those men preparing for priestly ordination. “Seminary formation,” he argues, “must include intentional formation into the diaconate.” Why? “There can be no sacrifice (priesthood) without service (diaconate).” Another important point the author makes is the need for the Church in the United States to end what the author calls the “retirement” culture of the diaconate by attracting younger men to serve as deacons.

In his Foreword, Archbishop José Gomez notes: “The deacon is neither a glorified laymen nor a ‘junior priest.’” But this is only to say what a deacon is not. Far too often deacons are defined by what we are not. Archbishop Gomez, neatly summarizing Keating’s thesis, gives a corrective to this lamentable tendency: “In the mystery of God’s saving plan, the deacon is called to minister in persona Christi Servi—in the person of Christ the Servant.” This is a preview for a Gospel passage Keating cites throughout the book, one he clearly sees as providing a key to diaconal identity: “I am among you as the one who serves” (Lk 22:27). These words, spoken by Jesus to his disciples as they were arguing among themselves about which of them was the greatest, is very relevant, given that the context is a teaching from the Lord about table service.

Keating notes in his introduction that permanent deacons are called to a vocation best characterized as living the “creative tension” generated from being a cleric who lives “a lay life.” If deacons are the leaven for the Church and for the world we are ordained to be, then this tension must be ever present. Given this inherent strain, serving as a deacon is not a vocation for just anyone, but only for those called to live this tension.

The first chapter about discerning the diaconal call makes up 35 of the book’s 79 pages. The strength to live the tension inherent in the diaconate can only be summoned forth from a man who is open to what only the Lord can give him. While arising from a man’s already formed character, the strength and flexibility to live this “creative tension” is a supernatural gift. Keating points out that in order to receive what he needs a man must know what he lacks. This knowledge can only be gained through a lengthy spiritual process, one that is necessarily painful at times. To become a deacon, a man must make himself vulnerable by receiving what he lacks in order to serve those in pain. This is why Keating insists, “It is the spiritual life that occupies the heart of all formation for Holy Orders.”

On the whole, deacons tend be doers, committed to doing what needs to be done. This is fine and well, as far as it goes. But being a “doer” does not go the distance the Church needs the deacon to go. Diakonia, as the author notes, is never to be mistaken for humanitarian service. In his chapter on formation leading to ordination, Keating gives two principles for diaconal formation: dying to self—the need “to surrender and entrust one’s whole body to the mystery of the Holy Trinity’s love,” and subsequently being formed by a new imagination—one no longer shaped by the world, but forged in contemplation of the Holy Trinity. This dying and rising must occur if one is to engage in diakonia successfully, which, as the section on principles of ministry demonstrates, bears little resemblance to worldly success. In ordination the deacon receives a brand, or a wound, indicating that he is no longer his own. Through ordination a deacon gives himself to Christ, who, turn, gives him to the Church for service. Looking back over more than a decade of diaconal service, I have experienced my ordination as a wound. Keating has given me a meaningful image to contemplate this reality.

The third chapter on diaconal ministry unpacks what it means to bear this wound “that renders [the deacon’s] very being vulnerable to share Christ’s own servant mysteries.” Therefore, it makes sense that the essential “‘work’ of diaconal spiritual life is to keep this wound open” so that the deacon can “learn how to receive grace even while ministering.” It is grace so received that enables a deacon minister at all. The diaconate is fully expressed only when it flows from “two great founts: liturgical service and the spiritual and corporal works of mercy, that is, service to the poor.” This both-and, which too often becomes a skewed either-or, is very important because the former flows from the latter and helps generate the creative tension that makes the diaconate what it is.

In summary, The Heart of the Diaconate offers two key points for contemplation. First, the diaconate, being a sacrament, when lived faithfully by those so called, is the concrete manifestation of the servant mysteries of Christ. Second, exercising diakonia in the person of Christ requires what the author describes as “a deep interiority, a ministry sustained by conscious communion with the Trinity.” Like his Master, the deacon must be in the Church and in the world as the one who serves.

The Heart of the Diaconate is an important contribution to the on-going task of better grasping the ecclesial identity of permanent deacons, which itself is a mystery.