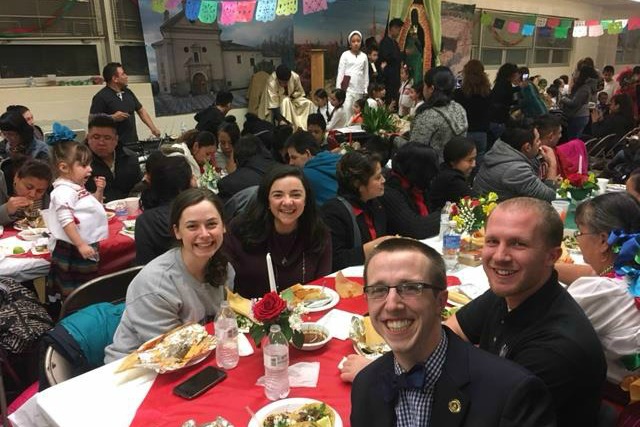 “Others always have something to give me, if we know how to approach them in a spirit of openness and without prejudice.”


As an apprentice in the Echo program, I have spent the better part of the past two years working in ministry with Hispanic people, most of whom are immigrants from Southern Mexico. Over the course of my apprenticeship, I have tried many times to put pen to paper with regard to my experience, willing myself to compose a piece of writing that could capture the challenges, joys, necessities, and singularity of Latino ministry. Until now, these earlier attempts were always met with some measure of self-resistance. The doubts would arise early on: how can I, an educated, white female, claim to say anything of merit about ministry with the Hispanic community? How could my reflections not just be an appropriation of another culture—the use of someone else’s story to further my own name? Is it okay to reflect theologically on experiences of life that don’t belong to me?

At the end of the day, these aren’t bad questions to ask. However, when considered too severely, they discount the role that I have played in my own ministry. I concede now that limiting my own voice out of fear doesn’t help empower the voices of those I serve to be heard—voices that, all too often, suffer in silence across linguistic and cultural boundaries. Keeping this in mind, I’ll venture to reflect a bit on my own experiences in Hispanic ministry, sharing how working with Hispanics has made me a better person and, even more crucially, a better disciple of Jesus Christ. It is my hope that this will provide a better understanding of Latino ministry, and demonstrate how the lessons to be learned in this ministry are also relevant to all Catholic life in the United States.

It seems appropriate to begin with Pope Francis’ oft-quoted notion that we must continually foster a “culture of encounter” in our world today. Francis defines this culture as one whose governing principle is that “all have something good to give and all can receive something good in return” (“Discourse to Brazilian Leaders,” 27 July 2013). While the Holy Father invokes this idea as a model for secular as well as interreligious dialogue, it is an overwhelmingly relevant locus for those working in Hispanic ministry in the United States. The context of Latino ministry in our nation is one in which two or more cultures are almost always at play—whether between different Latin American cultures themselves, or more often, between U.S. Anglo culture and at least one Latino culture. Without this approach of encounter, which endows each culture with inherent and equitable value, the stage on which both cultures play can devolve into a fighting arena, pitting different philosophies, cultural norms, communication styles, and lifestyles against one another. Using the model of encounter within Latino ministry tempers this otherwise failing quest for cultural synthesis, admitting simply that all parties involved—that is, both those ministering and those being ministered to—have not only the right to be who they are, but also have the invitation and obligation to come, to meet the other, and to learn from him or her.

So, what happens within the context of ministry with Hispanics when one assents to encounter—to simply come and “meet the other”? With myself as subject, I’ll offer an anecdotal example.

At the beginning of my two-year placement at my parish, I was tasked with introducing myself at all our parish’s Masses. In my remarks, I emphasized that I was working at the parish as a graduate student at Notre Dame, having already graduated from Our Lady’s University with a Bachelor’s degree in theology and Spanish. To the small Anglo community at our parish, these words meant something—my identity as a Domer and student of theology gave me instant social, intellectual, and spiritual capital. However, my introduction at the Spanish Masses did not yield a similar result. The most popular question that parishioners asked me following those Masses was “What is Notre Dame?” This was usually followed by another question: “What is theology?” I must admit, I was a little unnerved; for the first time in a long time, who I was on paper failed to translate to those that surrounded me. I could no longer hide behind the Golden Dome, Fr. Ted Hesburgh’s legacy, the quality of the Notre Dame Theology Department, or even my own degree to project my identity and legacy before me.

In the weeks that followed, I quickly learned that ministering to people you don’t know, who don’t know you, is not very fruitful. And with my identity and purpose a mystery to most in the parish, the task of communicating my self to the Hispanic community at Saint Gabriel became one of my most important endeavors. Here, I was invited into the simple yet challenging channel of encounter. That translated to: endless handshakes and small talk, late night conversations, awkward moments of poorly-spoken Spanish, shared coffee after Mass, meals in the parish hall, and hours spent in prayer with members of the Latino community. These moments of encounter—all so human, sometimes messy, and always raw—aroused a change within me. As they got to know me, I got to know them. We grew to know each other, not based on past accomplishments, but on the simple fact of our shared humanity and our consequent shared destiny in Christ. The more I got to know the people of my parish, I marveled at my new reality. There I was, a child of Anglo suburbia, working alongside dedicated catechists that grew up on cattle ranches in Mexico. There I was, learning more about my faith and learning how to pray from adults who had formal education only up to the third grade. There I was, being asked by ex-gang members how they could be better parish leaders. The reality that followed was even more enriching: soon enough, I had friends that grew up on cattle ranches, friends who had attended school only up to the third grade, friends who were ex-gang members seeking to be better parish leaders.

I openly and sincerely admit to you that from these friends, I—the Master’s student in Theology—have learned that there is a world of difference between knowing about God and knowing God himself, and that I radically tend towards the former. From these friends and their example, I have learned to pray more sincerely, to celebrate life more deeply, and to carry difficulties with more trust in God than I ever have before.

These immigrant friends of mine, who have taught me so much, are different from me in innumerable ways. But authentic encounters with them have taught me that the thing I share with them is vastly more relevant. The encounter I have lived in Latino ministry has taught me to see everyone’s shared identity in Christ as the most important and universal claim we all have in being. I could have never really lived this just by reading theological books on my own. I could only have realized it so profoundly in the context of encountering other unlike me and journeying with them in friendship.

I hope that this anecdote doesn’t come across as cute or as patronizing. I hope it comes across as an indication of the need for a hermeneutic of encounter within approaches to Latino ministry in the U.S. I also hope it shows how that hermeneutic is highly relevant for general spiritual growth—both on the individual level and that of the wider Church. Latino immigrant ministry is difficult work, and it isn’t asked of everyone. But what is asked of everyone is the willingness to encounter those who are different—the immigrant, the widow, the orphan—and, through those encounters, to create spaces to see God, and how his glory is made manifest in those others. As realizing, honoring, and nurturing such an identity in those we serve functions as the central goal of parish ministry, ministry therefore is a context in which encounter is always a promising approach. Like the story of two disciples on the Road to Emmaus teaches us, ministry is not a service to be sought, or an industry to explore, but rather a journey to be undertaken together. We all have something to learn from one another, and as we walk along the Way, we gain the grace to see Christ manifest among us all.

Featured photo courtesy of the author.

Stephanie Sonnick is a graduate student and second-year Parish Apprentice in the Notre Dame Echo program for catechetical leadership. She currently lives and works in the Archdiocese of Indianapolis.