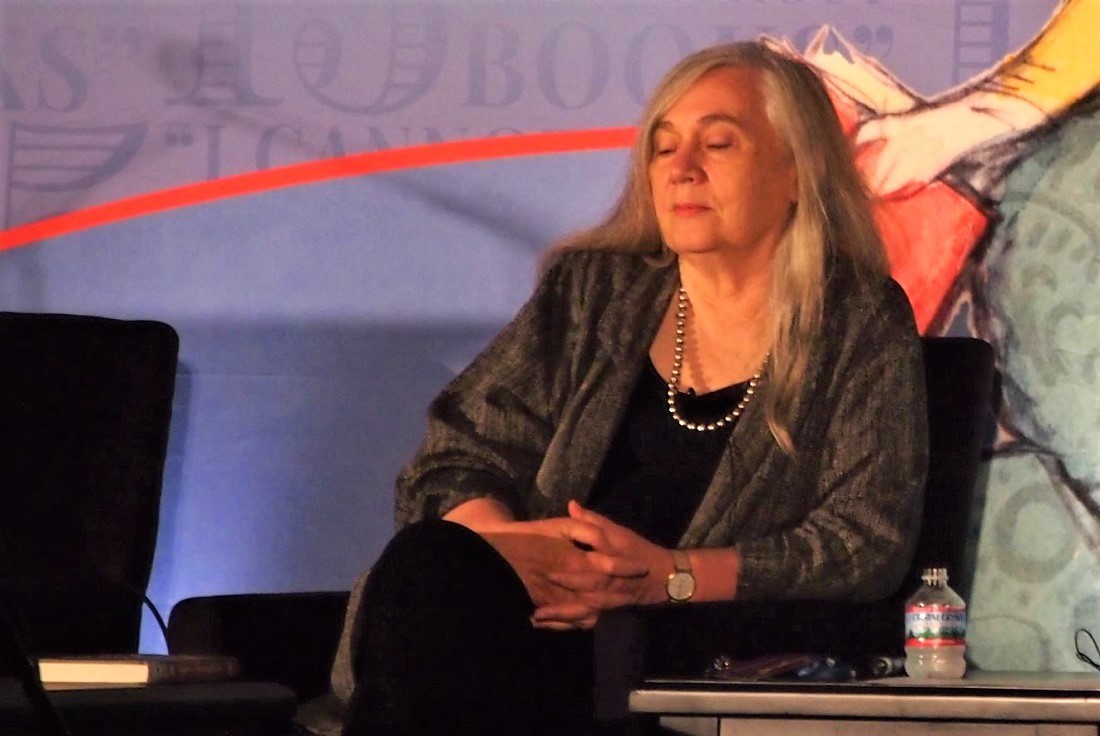 If we seek Christ’s beauty in a glory which is not that of the Crucified, we are doomed to seek in vain.

If C.S. Lewis was our Protestant saint for the 20th century, Marilynne Robinson is considered by many to be on her way to literary canonization. Robinson has authored four novels and half a dozen essay collections. She received the Pulitzer Prize for Gilead. She teaches at the nation’s premiere creative writing program at the University of Iowa. Yet, for all her success among worldly patrons, she has been lauded by Protestants because she affirms much of the Christian faith. She flies her flag with the Congregationalists and adores John Calvin. As one of my friends says, she is doing what we all hope to do—succeed in our craft, not only in spite of, but rather by proclaiming our faith.

This is why critiquing Robinson will earn you any number of enemies.

She is one of the only Protestant novelists that most Christians can name. People love her books. I mean, they really love them, gush about them, and read the whole Gilead trilogy religiously. Whereas, I feel somewhat embarrassed to admit that I could not finish Home, and I jumped between scenes of Lila on my audiobook. I have met Robinson at least half a dozen times. I heard her speak at several colleges, eaten lunch with her, shared dinner with her on another occasion (not that she would know me from Adam), so I am familiar with her, despite my apathetic approach to finishing her other novels. I have read her most beloved book, Gilead, three times because I teach it on a regular basis, but not without caveats that force students to question their adoration of the book.

The novel is beautiful, and beautiful things have a way of inspiring us, as they should. Several of the scenes, characters, and particular lines in the novel are lovely, defensible, and profound. When the Rev. John Ames meets Lila, she walks in on him preaching. He perceives her as “the only real listener,” and then adds, “I had a dream once that I was preaching to Jesus Himself.” Should we not be seeking to see Jesus in one another? Yes. And, Lila herself, becomes a compelling figure. As does the reverend, his son, the dying old Boughton, and, of course, John Ames’ namesake—Jack Boughton. When the novel ends with reflections on forgiveness and blessing, Ames considers, “Love is holy because it is like grace—the worthiness of its object is never really what matters.” Such a claim must be true or all of us are without hope. If we are to be loved, we must believe that love does not depend upon our merits.

When I taught this novel in Prague to a handful of atheist students, I found myself passionately defending this truth about the novel. Only when you realize that there are enough devil’s advocates in the room do you switch sides and play for Christ. Yet, I returned to teaching in my Christian college in America, only to find that, to teach Gilead, as Christ’s advocate, meant to not advocate for the novel.

What the world of readers appreciates about Gilead—and apparently the book is being read in Iran and Russia as well as Prague—is its emphasis on the beauty of earthly existence. Robinson directs our attention to this gift of life we have received and the giftedness of the world. By seeing this gift as enchanted or sacramental or holy, Robinson begins to sound more Catholic than Protestant.

Only, her aesthetic is not Catholic, but Emersonian, an aesthetic in which our consciousness and perspectives cast nature as grace. The natural world and our experience of it become more than worthy of attention; in Robinson’s fiction, they are sanctified.

Wheaton College professor of theology, Keith Johnson, has co-edited, along with Timothy Larsen, a collection of new essays on Robinson, one that engages her theology, Balm in Gilead: A Theological Dialogue with Marilynne Robinson. He writes, “For Robinson, grace has become nature. Our life with God is not determined by God’s specific act to relate to us in time but by our act of recognizing God in our experience of creaturely being.” When John Ames receives the ashy biscuit from his father, for instance, he chooses to remember it as a Eucharist, and thus, to make it so. His will transubstantiates the meal. There is a difference between the sacramental and transcendental imagination. The former is one in which God’s imagination has reinvested the world with his presence, so that creation may point back to him again. The second relies on the reader to revision the world as to intuit or attend to the divine.

Robinson interprets the Christian faith according to her own rubric, focusing always on God’s love, an admirable-sounding goal. In the 2008 Harvard Divinity Bulletin, she reveres the Apostles’ Creed, except, Robinson adds, for “that descent into hell, which I don’t find in scripture.” For Robinson, the most repugnant part of scripture is God’s sacrifice on the cross. She chooses to emphasize the love and self-giving of Jesus in that act, rather than its violent cost or our need for atonement. However, as Johnson reminds readers, “Christ’s death not only reveals that God is love; it also shows us how God is love. The cross reveals that God’s love is not sentimental but self-giving.”

Robinson’s rejection of the cost of grace reminds me of Dostoevsky’s The Idiot. When Dostoevsky began writing the novel, he wanted to portray a beautiful soul like that of Christ. However, his protagonist, Prince Myshkin bumbles through his relationships, unable to love people the way that they desire. At the University of Dallas, many years ago, Louise Cowan pointed out that Myshkin mistakes pity for love. When people confess their sins to him, when Nastasya, for instance, knows herself to be stained by sexual immorality, pride, and loathing, he tries to forgive her without acknowledging the reality of the sin. Just as Prince Myshkin tries to offer grace without sacrifice, so too does John Ames.

At a luncheon in Iowa, I asked a group of devoted Robinson fans to consider, how does John Ames move from his inability to forgive Jack to blessing his godson at the end of the novel? I walked through the transition for them. While other factors are at play, ultimately, Ames concludes—in imitation of his wife, “It don’t matter.” The sin does not matter. Ames tries to juggle this line of reasoning with the reality that “we human beings do real harm” to one another. Unable to reconcile his assertion in sin’s triviality with his intuition that evil causes suffering, Ames tires out. He leaves the theodicy question suspended, but he acts in accordance with his belief in the former reasoning.

After I made this argument, one of the Robinson fans protested that Jack had suffered enough and realized all of his wrongs. Having not read Home, I cannot argue this point. In Gilead Jack shows no contrition and makes no confession, but that matters less to me than the problem of Ames. Whether the wayward Jack knows his suffering, the responsibility lies on Reverend Ames to acknowledge that pain, to be willing to incur the cost of these sins, to offer hope to Jack in his situation and to extend his hospitality to the young man’s new wife and son, who are African-American. Perhaps the most unsettling part of the book is that Ames does not go through the trouble to invite Jack’s family to Gilead. If Ames is guilty of anything, it is his complicity in the town’s racism and his unwillingness to save Jack’s family.

For Robinson, grace is free for all, found everywhere, and in everything. This grace sounds wonderful, but it ignores the problem of evil. I know that Robinson prefers to highlight the goodness in creation and is frustrated by dark writers who she considers misanthropic. However, writers who acknowledge darkness and evil represent reality as it is, not how we wish it to be. A world that glimmers and shines, as it does in Robinson’s novel, paints over the ugly, but by doing so, marginalizes injustice.

A counter to Robinson would be the Catholic writer, Flannery O’Connor. If there is any writer that Robinson abhors, it would be O’Connor. And, rightly so, given Robinson’s dissenting theology. In O’Connor’s fiction, evil is unavoidable and often stares back at you from the mirror. Grace costs, in an O’Connor story. As she writes in a letter, “It’s true that grace is the free gift of God but in order to put yourself in the way of being receptive to it, you have to practice self-denial.” To me, O’Connor aligns more with scriptural revelation.

In the Old Testament, David refuses to offer a sacrifice that costs him nothing. In the New Testament, Jesus Christ sacrifices himself to offer grace. Yet, in Gilead, the cross becomes unnecessary. Resurrection is not mentioned, at least, not in the sense of everlasting life in the presence or absence of God. For Ames, heaven is just a magnified version of this world, which is itself a manifestation of God’s grace. Damnation is a dirty word, which sidelines the issue of justice.

Gilead is an undeniably beautiful novel, but I push back against those who are ready to adopt its theology. What if the reason that we fawn over Robinson is because her novel offers us the gospel that we want to be true—one that is easy, beautiful, and full of only light? In order to be spurred on to participate in Christ’s redeeming work in the world, I think we have to have eyes that see evil as well as good. To see injustice and hate, especially when it is in our own hearts.

Read Robinson’s novel. Delight in its beauty and the places where Ames speaks truth in accordance with the Word. But, then, be ready to live out a more uncomfortable and challenging gospel.

Faith Is Not a Big Electric Blanket