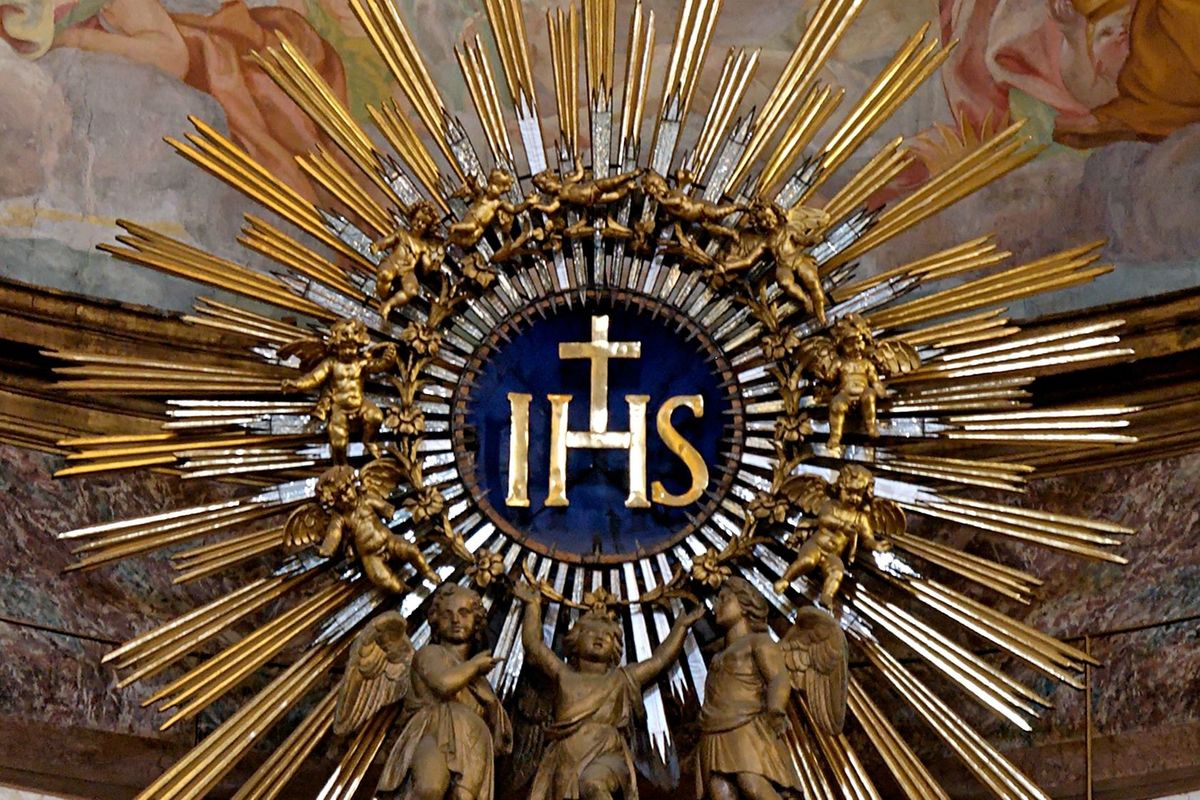 The Introit for Wednesday of Holy Week is taken from the great Christological hymn found in the second chapter of St. Paul’s letter to the Philippians:

At the name of Jesus, every knee should bend, of those in heaven and on the earth and under the earth, for the Lord became obedient to death, death on a cross: therefore Jesus Christ is Lord, to the glory of God the Father. (cf. Phil 2:10, 8, 11)


The Philippians hymn speaks of the utter humility of the Son in emptying himself of divine glory in order to “take the form of a slave” so that he might redeem humanity. The nineteenth century hymn At the Name of Jesus provides a sustained meditation on the name of Jesus inspired by the words of St. Paul. In contemplating the name of Jesus—the name by which humanity is saved (cf. Rom 10:9), the name through which we have a share in the very life of God (cf. 1 Jn 4:15)—we become aware of the fact that this “name above all names” is often misused, even abused. In the name of Jesus, who is love incarnate, people preach intolerance, violence, and hatred. Instead of pronouncing this name with “wonder and awe, and with bated breath,” people often throw the name of Jesus around as a casual expression of surprise or dismay, worse, as a form of cursing. As we approach the Triduum, let us pray that we may cultivate anew a sense of profound reverence for the name of Jesus, that we may always breathe it forth in love and pronounce it with awe-filled gratitude for the grace of redemption and the gift of self he pours into the hearts of those who confess him as Lord.

At the name of Jesus, ev’ry knee shall bow,
Ev’ry tongue confess him King of glory now;
‘Tis the Father’s pleasure we should call him Lord,
Who from the beginning was the mighty Word.

At his voice creation sprang at once to sight,
All the angel faces, all the hosts of light,
Thrones and dominations, stars upon their way,
All the heav’nly orders in their great array.

Humbled for a season to receive a name
From the lips of sinners unto whom he came,
Faithfully he bore it, spotless to the last,
Brought it back victorious when from death he passed.

Bore it up triumphant with its human light,
Through all ranks of creatures, to the central height,
To the throne of Godhead, to the Father’s breast;
Filled it with the glory of that perfect rest.

Name him, brothers, name him, with love as strong as death
But with awe and wonder, and with bated breath!
He is God and Savior, he is Christ and Lord,
Ever to be worshipped, trusted, and adored.

In your hearts enthrone him; there let him subdue
All that is not holy, all that is not true;
Crown him as your captain in temptation’s hours;
Let his will enfold you in its light and power.

This Lord Jesus shall return again,
With his Father’s glory, with his angel train;
For all wreaths of empire meet upon his brow,
And our hearts confess him King of glory now.