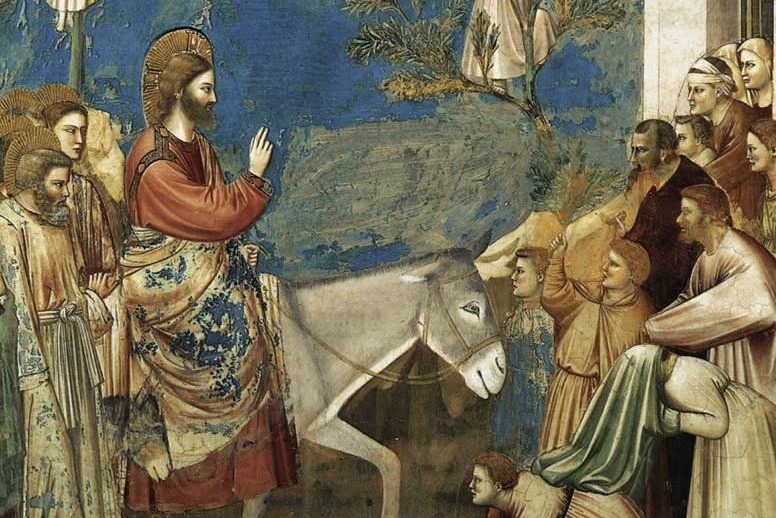 Throughout Holy Week, we will sing hymns and psalms once again that are often only used at this time of the liturgical year, and yet their impressions upon our hearts and souls will continue to deepen as they etch themselves into our liturgical memory. All Glory, Laud, and Honor. Pange Lingua Gloriosi. O Sacred Head Surrounded. Victimae Paschali Laudes.

This music forms us; it gives us voice to respond to the overwhelming love God has poured out upon us by sending the Son by the power of the Spirit to reconcile all of creation to the Father, whether we are singing ourselves, or lifting up our hearts on the voices of others. In this spirit, I would like to offer one or two pieces of music to mark each day of Holy Week as a way of contemplating the mysteries sung and celebrated in the liturgy. As we journey through this Holy Week, may we listen deeply to the Word of God sung and spoken in the prayer of the Church; may it penetrate our hearts and bring us into greater conformity to Christ, the Word made flesh; and may our voices truly be one with the choirs of angels and the communion of saints as we sing the great mystery of Christ crucified and risen.

The text for this well-known hymn was written in 820 by Theodulph, bishop of Orléans. At first glance, it appears a poetic retelling of the events surrounding Jesus’ triumphal entry into Jerusalem. However, when considered in light of the fact that Theodulph wrote it from prison (he had been exiled with many others during a tumultuous political shift), the text becomes a testimony to the author’s faith in Christ and an invitation to those who sing it today to see their sufferings as united to those of Christ, the King who will be crowned with thorns and enthroned upon the Cross.

The equally well-known sixteenth century hymn tune by Melchior Teschner captures the beauty and nobility of the “Redeemer King” described in Theodulph’s text, who entered his city riding on a donkey.

Yet, there is another setting of this hymn by Richard Proulx based on the original chant melody that captures something of the mystery of a King whose “power is made perfect in weakness” (2 Cor 12:9), of a Son who “learned obedience by what he suffered” (Heb 5:8). Both settings are well worth listening as we ponder the mystery of kingship in the Kingdom of God, where the one who serves is the one who reigns.