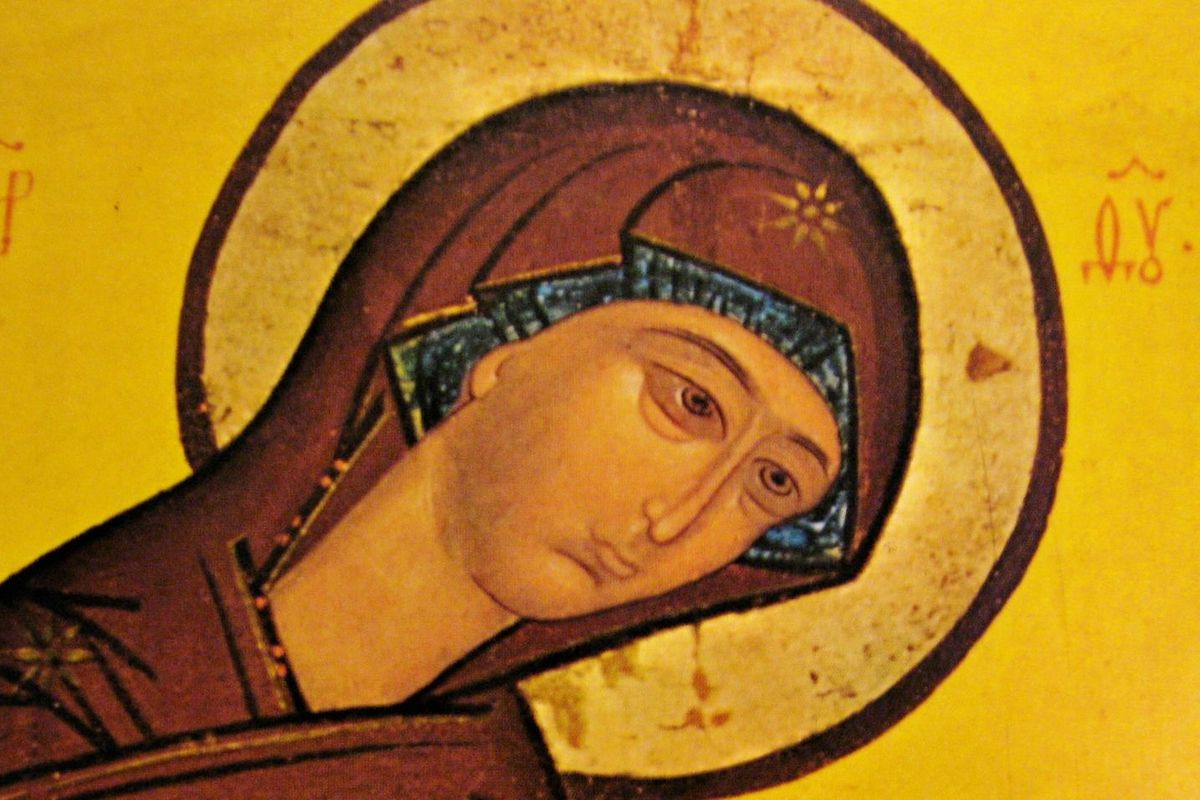 Iam a new mother, but each day I realize more and more that the journey into motherhood is a process of becoming. Reflection on this process often leads me back to Our Blessed Mother, who also had to become a mother. As Mary became the Mother of God, a fitting model for all mothers, she did so in the presence of Christ. In many ways, her tiny child became the model of motherhood for her: "The Babe that I carry carrieth me, saith Mary, and He hath lowered His wings, and taken and placed me between His pinions” (Ephraem, “Rhythm the Twelfth,” p. 53).

In this passage, Mary sees her participation in the kenotic mystery of the Incarnation as the realization of her role as both Mother of God and child of God. When a mother gazes down at her child, perhaps she sees herself—not just her physical reflection in the features of her child but in the spiritual reflection of herself also as a child of God. This encounter between mother and child can lead to a renewed encounter with Christ, particularly in the Eucharist, for it is in the Eucharist that Christ carries us and draws us ever near to himself.

In Mother Mary we find the perfect icon of motherhood because she was perfected as a Mother by Christ, who was present to her through her journey. When we reflect on Mary as a model of motherhood, the paradoxical nature of her maternity is striking. St. Ephrem the Syrian reflects on Mary’s journey into motherhood: “She gave Him milk from Himself that prepared it, she gave Him food from Himself that made it! He gave milk unto Mary as God: again He sucked it from her, as the Son of Man” (Ephraem, “Rhythm the Third,” p. 24).

In this passage, Christ’s role is twofold: he is both the giver and the receiver. But Mary’s role is not passive. She is the vessel through which Christ gives as God and receives as Man. Naturally, it is easy for mothers to reflect on Mary’s role as giver to the Christ Child; but Mary’s role of radical receptivity to Christ the Giver is worthy of pause. Here, Mary becomes a model of motherhood in a new, receptive way. Adhering to this model requires not only receptivity of God in his Might but also of the God who became small:

The High One became as a little child, and in Him was hidden a treasure of wisdom sufficing for all! Though Most High, yet He sucked the milk of Mary, of His goodness all creatures suck! He is the Breast of Life, and the Breath of Life . . . When He sucked the milk of Mary, He was suckling all with Life. While He was lying on His Mother’s bosom, in His bosom were all creatures lying.”(Ephraem, “Rhythm the Third,” p. 22)

He might easily have come to us in His immortal glory, but in that case we could never have endured the greatness of the glory; and therefore it was that He, who was the perfect bread of the Father, offered Himself to us as milk, [because we were] as infants. He did this when He appeared as a man, that we, being nourished, as it were, from the breast of His flesh, and having, by such a course of milk nourishment, become accustomed to eat and drink the Word of God, may be able also to contain in ourselves the Bread of immortality, which is the Spirit of the Father. (Irenaeus, Against Heresies, Book IV Chapter 38)

As mothers, so much of our time and energy is spent nurturing and caring for our children that we must remember to allow ourselves to be nurtured by Christ. For in receiving Christ in the Eucharist, we are received by him as part of his Body. When we approach the Eucharistic table, we should remember the words of the Lord’s prayer “Give us this day our daily bread” as a plea to Christ that we indeed are ready to receive him into our daily lives so profoundly as to lean into his divine succor.

Living in the Holy Family, Mary understood what it meant to give each day over to Christ. As she provided bread to nourish Christ daily, Christ was preparing the Bread of Life for her. This interchange of self-gift between Mary and her Son is a defining aspect of their relationship. Mary gave her whole self over to God’s divine plan in her fiat which seemed to proclaim to the Word Incarnate within her womb, “This is my body which will be given up for you.”

And Christ responds likewise as he offers his own body for his mother and the rest of mankind. In this way, the physical strains of motherhood are taken up by Christ. Accordingly, each moment of maternal self-offering can reflect Mary’s perfect fiat inasmuch as it is a participation in the self-giving love of Christ. Though Mary is a model of motherhood, Christ becomes the Archetype of motherhood in his act of self-offering. It is in the Eucharist that mothers are drawn under the wing of Christ to receive the tender love that they give. May each woman’s “yes” to a new life echo Mary’s fiat and make them radically receptive to Christ’s presence in their life so that she may encounter him more deeply through her motherhood.

Madeline Running recently graduated with her B.A in theology from Notre Dame. She now lives in South Bend, Indiana with her husband and young daughter.