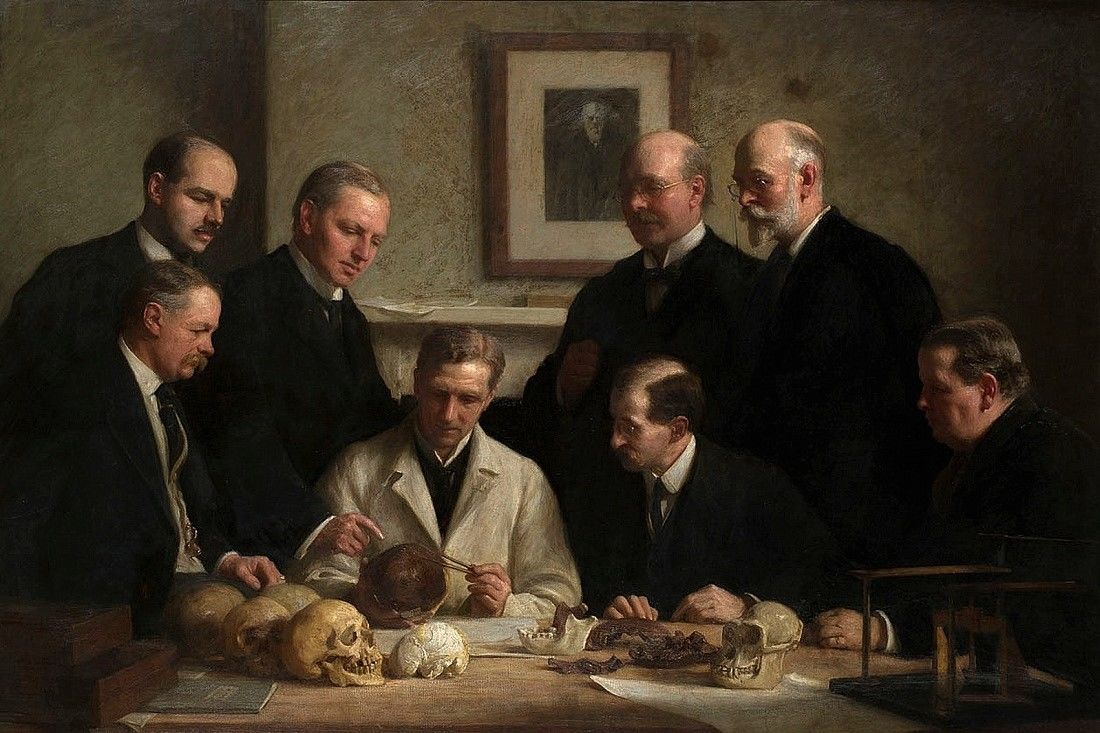 The great project of modern scientific positivism has been to establish all that can be known with absolute certainty—to isolate that knowledge which is purely objective and provable by experiment, and to hold this alone as truth. Michael Polanyi explains this clearly in The Tacit Dimension: “The declared aim of modern science is to establish a strictly detached, objective knowledge. Any falling short of this ideal is accepted only as a temporary imperfection, which we must aim at eliminating” (20). Ideally, this knowledge is not in any way influenced by human personality—despite the fact that it might be discovered and articulated by humans, it stands entirely on its own. Such a project has been and generally continues to be held as unquestionably valid and worth pursuing. And, if academia has begun to reject this positivist project, it still lingers on in government, media, education, and the popular imagination.

The seemingly obvious question that often goes unasked is whether such a project was ever even possible.

On what basis can it be assumed that science might proceed wholly uninfluenced by human character or thought?  In what sense does scientific knowledge, wholly objective and absolutely certain, really exist?

Polanyi answers both of these questions, rejecting the positivist scientific movement and illustrating, through his concept of “tacit knowing,” the intensely personal dimension of scientific discovery.

The concept of tacit knowing is based on the principle “we can know more than we can tell” (4). Take, for example, a person’s face. He writes, “we know a person’s face, and can recognize it among a thousand, indeed among a million. Yet we usually cannot tell how we recognize a face we know” (4). In this case, there is the “proximal” term, the features of the face, which relates us to the “distal term,” the face itself. This is the “functional relation between the two terms of tacit knowing: we know the first term only by relying on our awareness of it for attending to the second” (10).

This principle can be generalized to express the concept of comprehension, in regards to any entity, which we accomplish “by relying on our awareness of its particulars for attending to their joint meaning” (13).

In this sense, Polanyi argues that tacit knowing “forms an indispensable part of all knowledge,” and thus that an elimination of the personal elements of knowledge would eliminate all knowledge, which would make strictly objective science “fundamentally misleading” (20). Inherently, scientific theory relies on tacit knowing in the first place to recognize that entity which is to be comprehended, and in the second place to bring the meaning of the theory to bear upon that entity (20-21).

Polanyi further argues that “the experience of seeing a problem, as a scientist sees in it his pursuit of discovery” (21) is a form of tacit knowing. In recognizing a scientific problem, one “relies on interiorizing particulars to which we are not attending and which, therefore, we may not be able to specify” (24). This is what leads him to his most profound conclusion: scientific knowledge is, in fact:

The knowledge of an approaching discovery. To hold such knowledge is an act deeply committed to the conviction that there is something there to be discovered. It is personal, in the sense of involving the personality of him who holds it, and also in the sense of being, as a rule, solitary; but there is no trace in it of self-indulgence. The discover is filled with a compelling sense of responsibility for the pursuit of a hidden truth, which demands his services for revealing it. His act of knowing exercises a personal judgment in relating evidence to an external reality, an aspect of which he is seeking to apprehend (25).

For Polanyi, a chemist-turned-philosopher, this “personal” dimension of scientific discovery in no way invalidates or renders scientific discovery useless. He instead denounces the positivist view, which holds that scientific discovery can be separated from human persons and calls for a recognition that an acceptance of “the pursuit of science as a reasonable and successful enterprise is to share the kind of commitments on which scientists enter by undertaking this enterprise. You cannot formalize the act of commitment, for you cannot express your commitment non-committally” (25). His view of science “recognizes what all scientists believe—that science offers us an aspect of reality, and may therefore manifest its truth inexhaustibly and often surprisingly in the future” (69).

Essentially, by engaging in the scientific process, one is both using tacit knowledge to proceed, and is tacitly committing to certain ideas about the world, namely that it can be understood and described according to scientific theory. The scientist must understand how to apply his theory to a problem which he as yet cannot articulate, and in doing so has committed to the idea that this is a worthwhile activity and a meaningful process.

The realization that even science, that supposedly great paragon of objectivity, has its very foundations in non-scientific ideas, is perhaps the greatest argument against the “scientism” of our day. Scientism, which is really just scientific positivism in disguise, claims that the only valid knowledge in the world is the scientific type of knowledge (Fides et Ratio 88).

This is, of course, self-defeating, because the claim of scientism itself is not scientific. The scientist, ultimately, must make some type of personal “commitment,” as Polanyi would put it, they must adhere to a type of “belief,” whether they are aware of it or not. His account of scientific discovery, he says, “describes an existential choice” (80).

If the scientist must make a commitment, or as we have seen, must adhere to a belief, the question that naturally arises is whether there is perhaps some greater reality which would necessitate an even more foundational commitment.

Pope Emeritus Benedict XVI, then Joseph Cardinal Ratzinger, expresses this question in terms of “belief” in his Introduction to Christianity. He explains that:

According to Ratzinger, there is a distinctly Christian form of belief, which means “entrusting oneself to the meaning that upholds me and the world; taking it as the firm ground on which I can stand fearlessly . . . understanding our existence as a response to the word, the logos that upholds and maintains all things” (73). Ultimately, he notes, “Truth is the only ground suitable for man to stand upon” (76).

In tandem with the Catechism of the Catholic Church, this distinctly Christian form of belief would seem to be faith, which is “a personal adherence to God and assent to his truth” (CCC §150). This faith is not motivated by the “fact that revealed truths appear as true and intelligible in the light of our natural reason: we believe ‘because of the authority of God himself who reveals them, who can neither deceive nor be deceived’” (CCC §156) We have faith because it is certain: “It is more certain than all human knowledge because it is founded on the very word of God who cannot lie” (CCC §157).

However, while we are not moved to faith on the basis of our natural reason, so "that the submission of our faith might nevertheless be in accordance with reason, God willed that external proofs of his Revelation should be joined to the internal helps of the Holy Spirit” (Dei Filius §3). Faith is higher than reason (Dei Filius 4), but never opposed to it.

If we have faith in the God who reveals, then we must look to the fullness of that Revelation, Jesus Christ. The Word of God, the Truth, is Jesus Christ himself, in whom “God has said everything; there will be no other word than this one” (CCC §65). It is the certainty of Jesus Christ on whom we make our commitment, and in him that we find the reality and meaning of our entire lives. Thus we see the fundamental feature of Christian faith, which, according to Ratzinger, is not “‘I believe in something,’ but ‘I believe in you.’  It is the encounter with the man Jesus, and in this encounter it experiences the meaning of the world as a person” (§79).

Thus, given Ratzinger’s argument, it seems that it is precisely within the context of faith that one could make the type of scientific commitment which Polanyi discusses, because faith, with its foundation in truth, allows one to recognize the possibility of finding truth through the scientific process. Thus, the Catechism concludes that “methodical research in all branches of knowledge, provided it is carried out in a truly scientific manner and does not override moral laws, can never conflict with the faith, because the things of the world and the things of faith derive from the same God “(CCC §159). Truth is to be found in science, and about the world, because God is truth, and it is in him that the world has meaning.

It is faith, standing on the reality of Jesus Christ, which allows us to make an authentic commitment to the prospect of science. This authentic commitment is one that approaches science with the view that truth exists, and one might search for it. Unlike scientific positivism, which is inherently contradictory based on Polanyi’s analysis, science based on a commitment to truth entails no contradictions when Jesus Christ gives it meaning. Science without the foundation of truth is selling itself short. Once again, we see resounding evidence of what Jesus says to his disciples in John 8:31, “you will know the truth, and the truth will make you free.”

For those with ears to hear: Jesus Christ sets us free to pursue science with integrity, and to pursue it excellently.