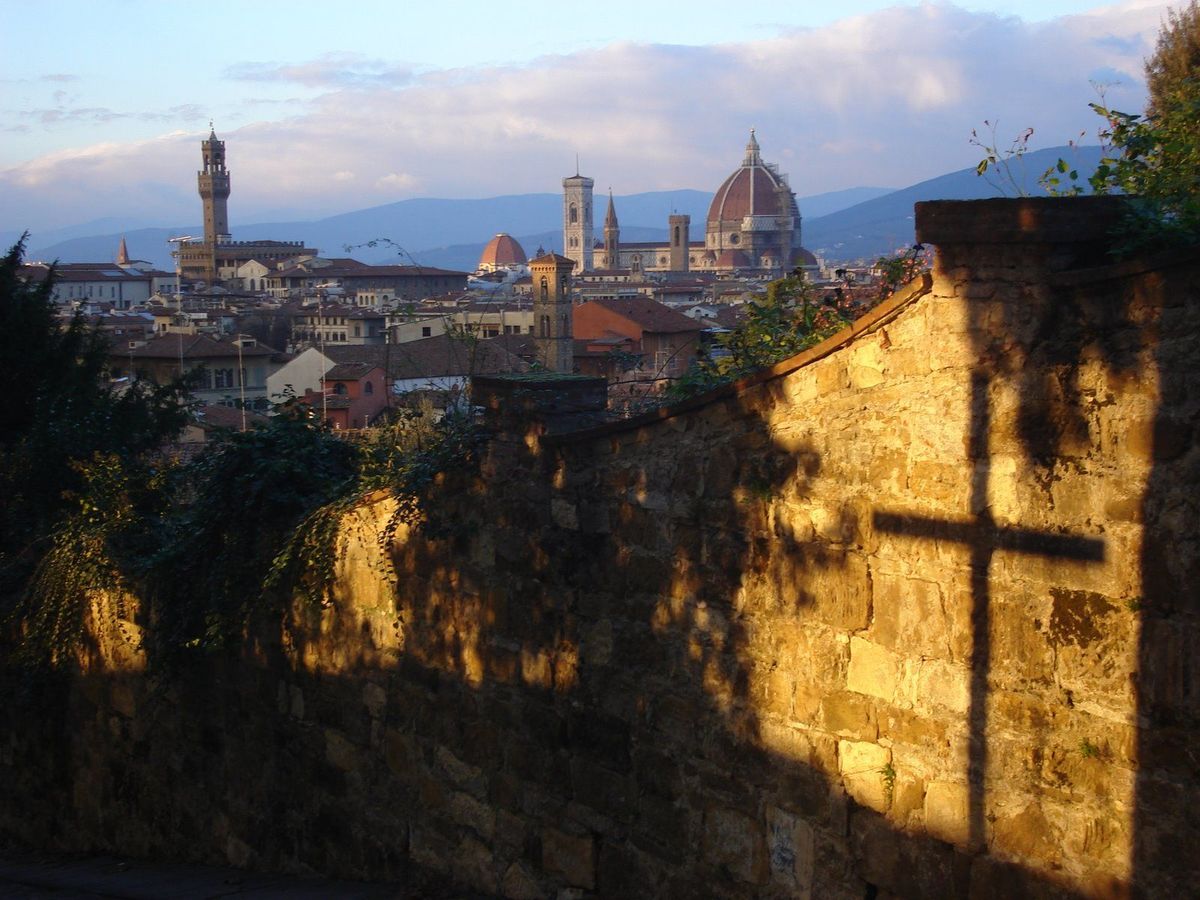 As Canon of Florence Cathedral and Director of the Museo Dell'Opera del Duomo, Msgr. Timothy Verdon works with some of the most renowned art in the Church’s cultural heritage. Prolific author and professor of art history for the Stanford University Florence program, Verdon will speak at Notre Dame this Saturday, November 12, on "Imagining Moral Dignity: Christian Art and Physical Beauty," during the Center for Ethics and Culture's Fall Conference. Church Life's Tania M. Geist had the chance, in a former capacity, to speak with Verdon on beauty in sacred art, architecture, and the liturgy. Here we reprint a relevant excerpt from that interview:

TG: Your work has been described as focusing on the dynamic bond between the mystery of God, the liturgy of the Church and art in the service of the faith. Could you speak on the relationship among these three?

TV: God is infinitely beyond human comprehension—God is God, we are creatures. And yet in everything that the Judeo-Christian tradition tells us about God, it is clear that God wants to communicate with his creatures, God wants to be known by his creatures. The whole point of the law and the prophecy in ancient Israel was that God wanted his creatures to understand him and themselves—a creature is a reflection, to some degree, of the Creator. This will of God to make himself understood—and in that process help us understand ourselves—reaches fulfilment in Christ. Christ is the Word of God where the Scriptures are many words that come from God and are filtered through the inspired authors; Christ is the very Word that all those other words try to give partial expression to.

Christ assumes a form that makes him intelligible to human beings—the Word becomes flesh. And then the Gospel of John immediately adds that he dwelt among us, and we saw his glory. What Christ did while he was on earth was to reveal the identity, the personality of the Father: all of the wonderful things that he did that reveal the father—the words he spoke, the miracles, the acts of mercy—even after Christ’s Resurrection and Ascension, they continue. All of these communicative actions continue in the sacraments of the Church.

What Christ did while he was on earth is materially continued in the sacramental actions of his mystical Body, the Church. So when a priest baptizes, consecrates bread and wine, when two Christians commit themselves to each other in marriage, when a penitent makes his confession—in all of those situations the saving actions of Christ are again fully present. Rendering Christ’s action continually, we see God, we understand God, we experience God.

What’s the relationship of all of this with art (which is my specific field)? The relationship is simple. When Christ took a Body—when the Word of God took a body from the humanity of Mary—it was to be seen. Christ is now invisible except in the abstract forms of the sacraments—we see water and we know that we’re being cleansed, we see bread and wine and we know that his Body and Blood are present, but we don’t really see the body and blood. But somehow the extreme simplicity of that communication that God wanted in Christ’s Incarnation is now filtered by a symbolic system of sacraments and signs. So we don’t actually see, but the art of the Church allows us to see. It extends down through the centuries, something like that privileged experience of the people of Jesus’ own time when they saw him and intuited that there was more than just a man here. Art allows us to continue to enjoy that experience.

Inside the dome of the Florence Cathedral (Photo: Tania M. Geist)[/caption]

It is no accident that historically speaking, most of the monumental art of the church . . . [was] made as a context for the liturgy. Small paintings were made for the home. The church building itself really has one function, to house the celebration of the Eucharist. The works of art that allow us to imagine ourselves present really become the backdrop for efficacious signs and sacraments in which Christ really is present, and when Christ is present then God is present.

So the[re is an] ancient desire of human beings to see God: Moses on the mountain asks God to show him his face. . . . In Christ people really contemplated the Face of God. Christ tells us that we see him in the poor and the needy, and so on. But the works of visual art that surround these privileged moments in which [people] come into direct contact with Christ, and which usually tell stories from the life of Christ, or of Mary or of the saints, in whom we also contemplate Christ—the works of art are part of this process.

TG: How have you incorporated all of this into your work as an art historian?

TV: Much of what I’ve done as an art historian is to try to remind other art historians of this whole dimension that I’m describing, which usually has not been discussed. And that’s a grave omission, because the artists and the patrons were more or less conscious of all of this. They lived within this system. So the art historians should be aware of it, because if not they are going to talk about these works in a way which is misleading. Certainly the style, the economical features—all of these things are interesting and real and an important part of the history of art, but the larger framework within which these works were meant to function was something more like what I’ve been describing.

I try to call the attention of colleagues to these things, and even more, perhaps, I try to reawaken Christians to the extraordinary eloquence and beauty of this visual heritage which today ordinary believing Christians have the equipment to understand. They may not be art historians but they have keys to understanding the works of architecture and painting and sculpture that many art historians don’t have. And those keys come from their own faith, from the simple experience of life in church, the life of the sacraments.

What believing Christians have been harried by the Spirit to do right from the beginning is to seek those poetic forms of expression and those physical actions and those material objects that can be called into play to express their faith. Really Jesus himself taught us to do this. At the Last Supper, he took bread, and then he said words: “This is my Body.” Jesus, who is himself the Word made flesh, in order to communicate, takes physical things that already have their own range of meanings and says words that open that implicit range of meanings to a much more specific and explicit communication.

So Jesus himself is the first teacher of how you combine things and actions and words in order to create a composite work, which is basically a work of art. At the Last Supper, he puts on an apron, he kneels down, he washes their feet. He’s continually doing things that invite reflection and then making sure that we understand what he’s doing.

What I’m saying is that you can’t really just talk about the visual art of the Church, or the music of the Church, or the liturgy. All of this is part of a single creative impulse that flows from the experience of Christ himself, the Word who becomes flesh. A conceptual expression of God who becomes visible and tangible. The First Letter of St. John says that this is what we have seen and touched and contemplated with our own eyes; it’s a total sensory and intellectual experience. The liturgy is that. So an artist working for the church and for its liturgy is within this millennial creative action which, in the last analysis, is a continuation in time and space of the Creation described in Genesis.

TG: As Canon of the Florence Cathedral, if you were able to point out one thing to every visitor to “the Dome,” what would it be?

TV: It would be the most obvious thing, which is that it is very big, like many cathedrals and churches. There is an urge to try to configure a human space that is worthy of our concept of God—a space which, in the simplest terms, is going to be very big. Because God is infinitely above us; God occupies the entire universe.

That first, most obvious, most simple, most universal impression that you get in our Cathedral, as in many churches, really has to be taken seriously. Why do people want these enormous spaces?

Then from the very size, you move to the sense of order, articulated in a different way according to the different period or architect. There always is some more or less legible sense of order. You find something that is much bigger than most spaces you’ve been in that is then ordered in a particular way that engages your intelligence. Why this large central area, these smaller side areas? What goes on down at the far end? In the chapels? The order itself interests people. And then you start to talk about specific works.

The one thing that I do tell all visitors to the Cathedral—indeed any church where I might have the task of helping them understand—is that if we are there for a visit, we are seeing it in our own way. The church isn’t built to be visited by tourists. We really should come back when the church is full of worshippers, when the central nave becomes the space through which a procession enters to go to the altar. We have to experience these spaces within that framework of total art that I talked about, in a liturgical situation.

If we believe in a Word who became flesh, then the experience of an ordered space that becomes animated, alive with people, with the liturgy, is very close to the heart of what we believe. It’s about a conceptual Word that becomes man. But it would be true in any religious situation—you have to see these buildings in use.

The real church is not the building, the real Church is the people. The building assumes the name “church,” which in the Christian Scriptures is used almost exclusively to refer to the community of people.

The building is just a container—beautiful, historical, rich in memory. But if something were to happen to it, we would be sorry, but we would go on.

Editors' Note: This edited text was originally published in L'Osservatore Romano's print English edition as part of a phone interview by Tania (Mann) Geist in 2009.

Featured photo: Florence Cathedral at a distance, seen from the Stations of the Cross lining the path from Piazzale Michelangelo into the center of Florence, Italy. Photo by Tania M. Geist.