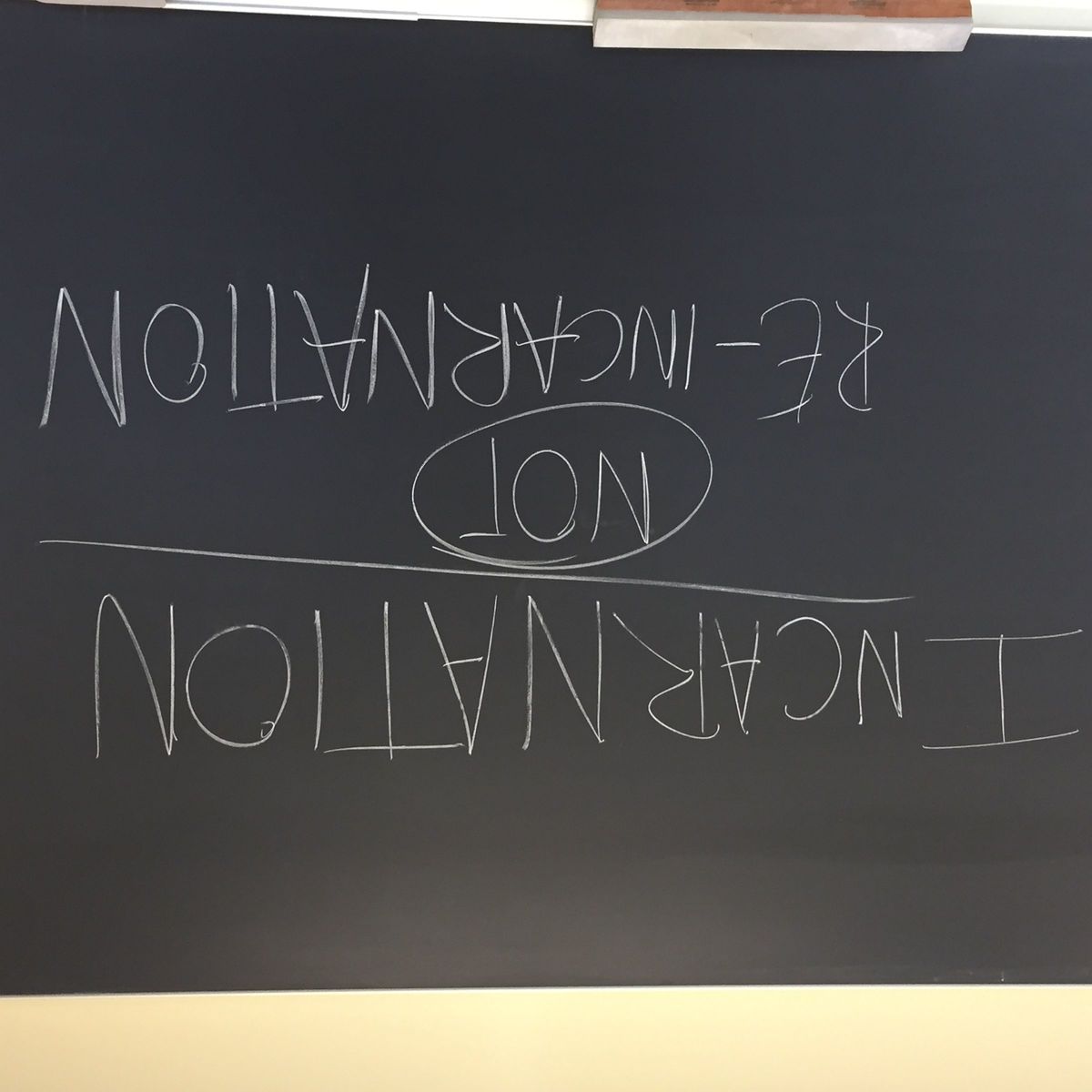 Taking summer Theology classes at Notre Dame last June, I heard John Cavadini say more than once, “Our children know more about re-incarnation than the Incarnation.” I thought it was catchy, and that it was a testament to Dr. Cavadini’s commitment to helping all of us taking Theology MA classes be better catechists. I didn’t imagine it was a literal comment about the knowledge of my future students.

About a month later, I found myself in Indianapolis, teaching Religion to about a hundred and twenty middle school students through the Notre Dame Echo program. The topic for the seventh graders is “The Story of Jesus” and since unit one is all about the “Mystery of the Incarnation,” I devoted a couple days in class to exploring that term with my seventh graders.

As soon as I put up the definition of “Incarnation” on the board, in both classes, I immediately got a hand up in the air, “Ms. Burr, isn’t that the thing where you could be an animal?” Had I not heard the phrase “more about re-incarnation than Incarnation,” I’m not sure I would have been able to properly decipher what Matthew was asking. “Do you mean when you die and come back as an animal?” I asked, trying to clarify.

“Yeah, that. Isn’t that Incarnation?”

“No,” I said, trying to figure out the best way to re-route the class of twelve year olds that was now focused solely on what animal they would most like to re-incarnate as. “Re-incarnation is where you die and come back as another person, or animal, which Catholics do not believe in.” I was unable to find a helpful segue and just re-directed everyone to the definition I was trying to get them to copy into their notebooks, “The Incarnation is about Jesus-- it’s the belief that Jesus is truly God and truly human.”

My second group of seventh graders had exactly the same question, and it was again the first hand up after I wrote the definition on the board. “I thought that was where you die and come back as something else,” Maria said with a confused look on her face. Again, I made a pathetic segue back from re-incarnation to the belief about Jesus Christ.

We spent the rest of that period reading Luke’s infancy narrative in dramatic fashion, with students clamoring to read the parts of Gabriel, Mary, and the shepherds. Along the way we talked about how Luke is showing us this is no ordinary baby. We listed signs that show Jesus was a human (he had a mother, a birthday, a hometown) and signs that he was divine (the angels and virgin birth tipped them off pretty quickly).

The next four weeks or so were all devoted to aspects of Jesus’s Incarnation and I am confident that if you ask them to define Incarnation now, most of them will say something along the lines of “Jesus is truly God and truly man,” or the wording they prefer, “100% God and 100% man.” But I will always remember introducing that word and finding that the catechetical state of my students-- students mainly with two Catholic parents, who are parishioners at our church, who have been in Catholic school for up to eight years-- was as confused as I had heard.

Sami Burr is '16 graduate of the University of Notre Dame. She serves as an Echo Theology Teacher at Nativity Catholic School in the Archdiocese of Indianapolis