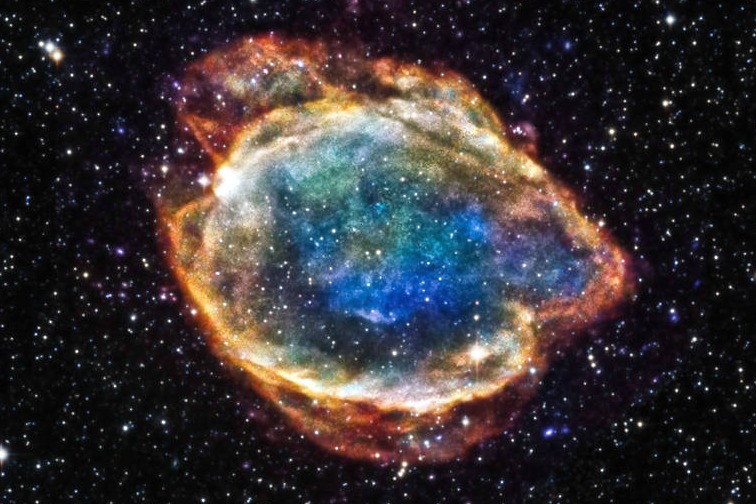 One of the first questions people ask me, upon learning I am a physics major, is what exactly I study. In an abstract sense, I study the universe—its fundamental particles, forces, and the mathematics used to describe their interactions. Since this is usually still too broad, I describe my particular field of research: nuclear astrophysics. My advisor and I write and run computer code to simulate supernovae, the collapse and subsequent detonation of massive stars. Supernovae, as it turns out, are element factories, taking light elements (hydrogen, helium, carbon, oxygen, etc.) and fusing them together to form heavier elements. In the words of astrophysicist Neil deGrasse Tyson, “We are all connected, to each other biologically, to the Earth chemically, and to the rest of the universe atomically.” We owe our very existence—the elements in our bodies, in the air, and in the soil—to the stars, and to the nuclear physics governing them. But to what—or to Whom—do we owe physics?

Any intellectual pursuit must begin with wonder. One of my most profound experiences of this wonder occurred while I was on a mission trip to Peru during high school. While we were staying at a site in the middle of the jungle, I looked up to the sky one night, and I was awestruck by how many stars were visible. I could make out the bar of the Milky Way across the sky, and even its satellite galaxies, the Magellanic Clouds. Without a doubt, it was one of the most beautiful things I had ever seen. The sense of wonder I experienced that night is something I have cherished for many years, and it is something I experience whenever I look up at the stars. When I look up at the stars, I experience a profound sense of connectedness, both to the Earth and to the universe. Every atom in our bodies likely passed through several dozen stars like those, which lived and died untold billions of years ago. The light from these stars passed through space for hundreds upon hundreds of years, crossing trillions of miles of space, until it is finally converted into an electrical impulse in my brain. When we look up at the stars, we are really looking back in time. It is impossible for me not to feel a sense of awe at this fact. The universe is incomprehensibly huge and incomprehensibly ancient, and yet humankind has been trying since the beginning of civilization itself to understand our place in the cosmos. In many respects, the questions physicists grapple with on a daily basis—What is the fundamental nature of things? How did the universe come to be? How will it end?—begin to approach philosophical and theological relevance.

As a researcher, I also experience wonder of a different sort: why are the equations governing physics so simple? In physics, there is no requirement for fundamental laws to be easy to write, but they almost invariably are, and no one understands why this should be the case. I’m a math nerd (forgive me!), but I find the equations of physics beautiful. I can understand and experience a sense of aesthetic beauty upon seeing the stars, but the elegant simplicity of mathematical equations is almost objectively beautiful. Physicists hate writing, so they try to distill our understanding of nature into as few (hopefully simple) equations as possible.

In recent decades, our understanding of the universe has increased exponentially, as has the universe’s size. The Earth is one of eight planets orbiting around an exceptionally average star, which is itself one of several hundred billion stars in the Milky Way galaxy. The Milky Way, in turn, is a relatively average galaxy, in a universe filled with trillions of galaxies—a universe which, we have recently discovered, is expanding ever faster. Some might think that this makes us insignificant; we are one species, on one planet, in a universe which is incomprehensibly large. What does that say about us as a species?

To me, it says a great deal. Humankind is the only species on Earth which has ever achieved sentience. The mere fact that we can ask these “deep questions” is proof. There is no evolutionary advantage conferred upon a species which asks why it has come to be, nor is there an obvious advantage for an appreciation of beauty. In a very real sense, these are some of the fundamental characteristics which make us human, and which make us unique among all the species on Earth. But lest we become arrogant, there is still a great deal we do not understand about the universe we inhabit. What—if anything—existed before the universe? Are there other universes out there? Why are the laws of nature the way they are? These questions may be beyond the ability of physics to answer, but if one thing is certain, it is that physicists will never stop trying to answer them. (Even if they end up answering a completely different question in the process!)

Physicists do not seek to bend the universe to their will, which is just as well, since the universe functions according to physical laws which are completely indifferent to our existence. Instead, we seek to understand these laws—not to control the universe, but to better appreciate our place in it and our relationship to it. As a Catholic, I believe—as all people of faith do—that human reason is a gift from God, as is the universe itself. I do not know if God programmed the laws of physics into the universe at the moment of the Big Bang, or if he had the eventual existence of humanity in mind when he set everything up, but it is my hope that by studying the universe I believe he created, I might arrive at a better understanding of our Creator.

The universe isn’t something purely “out there”; it is within each of us. The relationship between science and theology is often portrayed as fraught, openly hostile, or even just awkward. But it is in establishing a dialogue between these fields that we recognize the same fundamental truths. The universe is a gift. Our existence is precious. Our ability to reason is a blessing. If we fully appreciate these realities, then any study of the world—when conducted in a spirit of humility and openness—can only lead us closer to God and to one another.

Brandon M. Roach is a physics major and a nuclear astrophysics research assistant at the University of Notre Dame.