Catholic Memorial High School, in the West Roxbury neighborhood of Boston, recently began a “Scholars Program” to recognize and promote academic excellence. Students must apply, write an essay and be interviewed before acceptance. There are currently about sixty members out of an enrollment of seven hundred.

Let us begin with one approach to our theme:

“The Catholic intellectual tradition is the centuries-old effort to understand the Mystery of faith more fully—its scope and implications—and to live it more faithfully.”


When I was growing up “Mystery” was often presented as “incomprehensible” and portrayed as a red light before which understanding must stop. But in a more authentic Catholic view, Mystery signifies “inexhaustible”—like a blinking yellow light, that signals us to proceed with reverence.

But the Mystery which the Catholic Intellectual Tradition ponders and seeks to appropriate more fully is “the Mystery of Faith.” Recall the celebrant’s proclamation after the words of consecration in the Eucharistic Prayer. The “Mystery of faith” is the Paschal Mystery of the Lord Jesus: his death, resurrection and ascension.

Note: we seek to understand the Mystery of faith. For the Catholic Intellectual Tradition, faith and reason are not antagonistic, but deeply complementary, indeed mutually enriching. In the words of Pope St. John Paul II, they are the two wings by which the human mind soars to God.

At the same time the “thinking” entailed is not neutral and detached. It recognizes that the person seeking is himself or herself an active participant. They themselves are co-involved in the quest: their own meaning and purpose at stake. Hence “devotion” and prayer are ingredient to the exploration of the Catholic Intellectual Tradition. It is a matter not only of the mind, but of the heart as well. As Pascal passionately exclaims: “the heart has its reasons that reason does not grasp.”

But this leads to what is, perhaps, the crucial point. We hear often that there are three great “religions of the Book: Judaism, Christianity, and Islam.” There is some truth to the assertion, and it can serve as a valuable point of entrance into dialogue among the three religions. But, upon deeper consideration, it misses what is most distinctive about Christianity.

Christianity is not at its heart a religion of the book, but of the Person: the Person of Jesus Christ. Thus Robert Wilken is entirely correct when he writes: “After the coming of Christ, human reason had to attend to what was new in history, the person of Jesus Christ” (The Spirit of Early Christian Thought: Seeking the Face of God).

This sense of the newness, the novum, of Jesus Christ permeates the New Testament. It proclaims the “new covenant,” the “new creation,” the “new Adam,” the “new Jerusalem.” And the Catholic Intellectual Tradition takes up joyfully the refrain. It is the centuries-old effort to understand this new reality more fully—its scope and implications—and to live it more faithfully. Already in the second century St. Irenaeus of Lyons sounded the theme whose variations will resound through the centuries. “Christ brought all newness in bringing himself!”

It would be useless to deny that we face here what has been called “the scandal of particularity.” A specific individual, who lived two thousand years ago, in a backwater town of the great Roman Empire, who was murdered by that Empire as a rebel against Caesar in one of the most gruesome and degrading forms of execution ever devised by human “ingenuity”—that man is the very Incarnation of the living God. Jesus Christ, crucified and risen, is Emmanuel: God with us!

We should not allow the beauty of Gregorian chant or a Mozart Mass, the majesty of the theological work of a Thomas Aquinas or a Hans Urs von Balthasar, the splendor of a great cathedral or the painting of a Michelangelo to camouflage that reality. The One who has been disfigured and defaced is the human face of God.

As St. Peter puts it in the first proclamation of the Gospel on the day of Pentecost: “this Jesus, whom you crucified, God has raised from the dead and enthroned him at his right hand. From there he sends the Holy Spirit upon us” (Acts 2:32–36).

Thus, at the center of Christian faith and of the Catholic Intellectual Tradition is the Cross which faith sees, not as an instrument of death, but as the Tree of New Life. The twelfth century mosaic in Rome’s church of San Clemente magnificently depicts the life-giving Cross. From the Cross of Christ flow living waters that irrigate a flourishing acanthus bush, whose branches enfold human beings and animals in peaceful harmony.

What our Tradition ponders and celebrates, then, is a comprehensive, a Catholic, vision of reality: a new understanding of God, of the human, of the universe.

In contrast to a secularism that is often one-dimensional, that reduces reality to the merely this-worldly, to what we can control and manipulate, the Catholic Intellectual Tradition proclaims that the world is “sacramental”—that it is created by God and therefore has an intrinsic worth. At the same time the world points beyond itself to the God who creates and sustains it. As the nineteenth century Jesuit priest and poet Gerard Manley Hopkins exclaims: “The world is charged with the grandeur of God!” The world and earthly things are not idols to possess, but icons to respect and be grateful for.

Moreover, it affirms that God created the world not out of some need or necessity, but out of sheer goodness and grace. God does not need the world and humanity to be God. God is the Triune God. The God Christian faith worships, the God whom the Catholic Intellectual Tradition seeks reverently to know more fully and intimately, is God, Father, Son, and Holy Spirit.

For the Mystery of the Trinity is not a mathematical puzzle, but the fullness of life and of love. The “Tri-personal” God is interpersonal communion, who reveals what it truly means to be person-in-relation.

Humankind, created in the image of this God, redeemed and given new hope by the death and resurrection of Jesus Christ, has immense dignity. We are not waiting aimlessly and hopelessly for Godot. For we are convinced that “God so loved the world that he gave his only-begotten Son” (Jn 3:16). Hence human life, from conception to natural death, has meaning and purpose.

But this dignity and grace also carries great responsibility: to enter into and promote a communion of love. To foster what Pope Francis calls an “integral ecology” that embraces individual, community, and care for the environment, our common home.

The Catholic Intellectual Tradition thus focuses not only upon the individual (as does so much of secular culture—“I did it my way . . .”), but upon the community: the we of the Church, the communion of persons. The Holy Spirit works to create communion, to teach the language of “we”—a lifelong learning process!

Thus the Catholic Intellectual Tradition insists that Catholicism is not a private affair, a merely personal feeling or preference, but that it has intellectual substance and public importance. Separation of Church and State does not signify the divorce of faith from the public realm. Those who say that “faith and politics do not mix” have not paid sufficient attention to the prophets of Israel or to Jesus’ “Sermon on the Mount.”

In a famous address, Dr. Martin Luther King, Jr. affirmed his belief: "the arc of the moral universe is long, but it bends towards justice.” In many ways the Catholic Intellectual Tradition can be understood as a commentary on that phrase.

It celebrates its foundation in the Paschal Mystery of Jesus, who was put to death unjustly, but raised to life by the God of Justice. It explores its implications in what we owe to God and to our fellow human beings. It often can take a “counter-cultural” stance, for it resists a culture of mindless consumption (what Pope Francis calls a “throw-away culture”), the idolatry of wealth and power, the commodification of human beings by the exploitation of labor or engaging in sex trafficking. It denounces the many ways our culture defaces human beings—even when they are hidden in the womb.

However, based on the Catholic Intellectual Tradition, we might offer a further amplification of Martin Luther King’s insight. For beyond Justice (however imperative) is Love that is never a right, but always a Gift. “The arc of the universe is long, but it bends toward Love.”

One can catch here an echo of the Catholic tradition’s greatest poem: Dante’s Divine Comedy. At the end of Dante’s perilous journey he finds fulfillment in a life-giving vision of the Blessed Trinity. And the poem ends in awe and adoration before “the Love that moves the Sun and the other stars.” The whole of the universe caught up in the God who is Love.

This is the wondrous vision that the Catholic Intellectual Tradition ceaselessly celebrates and explores. Welcome to the adventure! 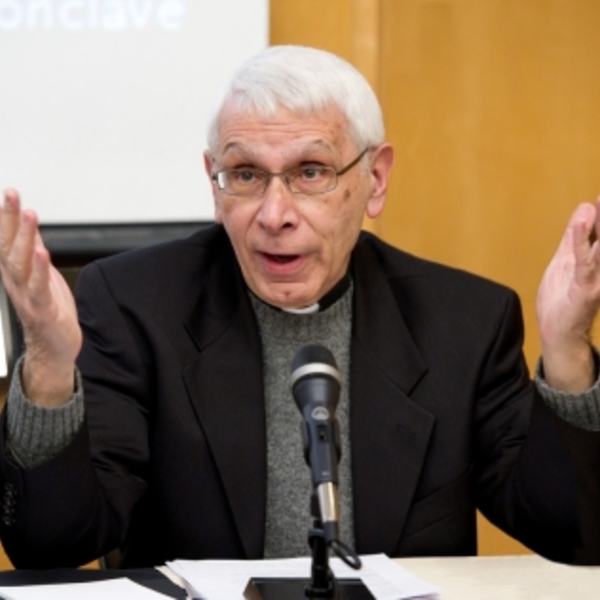 Fr. Robert Imbelli is a priest of the Archdiocese of New York and Associate Professor Emeritus at Boston College. He is the author of Rekindling the Christic Imagination: Theological Meditations for the New Evangelization.