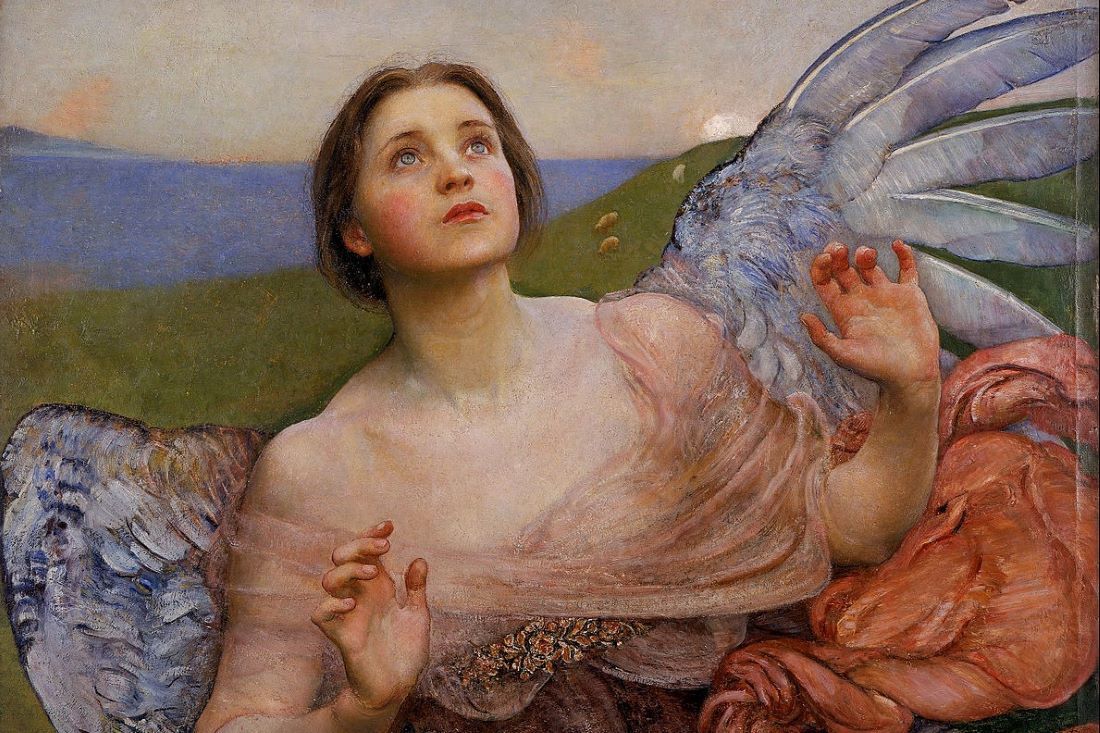 This spring I read Muriel Spark’s The Prime of Miss Jean Brodie solely because of the blurb on the back of the book said: “Determined to instill in [her students] independence, passion, and ambition, Miss Brodie advises her girls, ‘Safety does not come first. Goodness, Truth, and Beauty come first. Follow me.’” I hoped that Miss Brodie could be a teacher to inspire me during the quarantine to keep teaching well. I probably should have streamed Dead Poets Society or Goodbye, Mr. Chips.

Instead of inspiring her students to contemplate goodness, truth, and beauty, as she professes, Miss Brodie tells them scandalous stories about her romance with men who have since died in the War. She binds her students together in a pact against the authority of the school and attempts to image herself in them. Ms. Brodie asks students to parrot her preferences, rather than imitate her loves. When a student answers that Leonardo Da Vinci is the greatest Italian painter, Miss Brodie corrects her, “That is incorrect. The answer is Giotto, he is my favorite.” Miss Brodie is an example of a teacher who tries to make disciples of herself for herself.

The acclaimed Catholic novelist Flannery O’Connor attended a progressive high school apparently modelled on Miss Brodie’s methods. Her school motto was, unironically, “The Good, The True, The Beautiful,” but that merely shows how any organization can coopt the language for nefarious purposes. Miss Jean Brodie surely did. She describes her progressive high school disdainfully in her letters: “Total non-retention has kept my education from being a burden to me.” And elsewhere, she repeats the same, “I’m blessed with Total Non-Retention, which means I have not been harmed by a sorry education.”

O’Connor’s high school taught no classes, only offered “activities.” In chemistry, for example, the teacher let students choose what they wanted to study. The girls chose photography and cosmetics. Flannery quips that the teachers “would as soon have given us arsenic in the drinking fountains as let us study Greek. I know no history whatsoever.” Such a school flagrantly dismisses the idea of tradition, paideia, authorities, and models. They allow each student what they assume is freedom. In actuality, they have burdened the uneducated with a compass-less existence. They replace knowledge with opinion.

When I train teachers during professional development weeks, I encounter both of the aforementioned fallacies: either you create idolatry or you let students become self-governing authorities. In reality, we need teachers who model a love for first things. For a model teacher, I look to Socrates. In his dialogue with Phaedrus, Socrates dissuades the young man from overly praising Lysias, who is offering to teach the young man in exchange for sexual favors.

Already, Socrates rises above the status quo for ancient educators by not asking Phaedrus for such an exchange. Rather than attempting to win something from Phaedrus, Socrates begins his instruction of the youth by pointing him towards Eros, the god of love. When teachers, such as Socrates, do not envision themselves as the goal of imitation, but rather they acknowledge they are imitating another, then they become right models towards wisdom.

Teachers must model by living well. As much as we want our students to remember every lesson that we taught, in reality, they will remember a few encounters with us, a handful of insights from what they read, but they will remember most how to seek truth, pursue goodness, and cultivate beauty in how they observe their teachers practice these realities.

If you ever had the pleasure of reading C.S. Lewis’s autobiography Surprised by Joy, you know it is primarily about his education. He exalts one teacher, Smewgy, who taught him nothing but Latin and Greek, yet showed him how to “taste” the classics. “He first taught me the right sensuality of poetry, how it should be savored and mouthed in solitude,” Lewis reminisces. The words of his teacher still ring in his ears: “Never let us live with amousia,” without the Muses.

Of course, other teachers may also need to demonstrate why jumping off a cliff without a parachute is less fun than it sounds. My favorite moment in Lewis’s story is his introduction to “The Great Knock.” I always perform this dialogue with a hesitant student who reads Lewis’s lines. The tall, lanky tutor who looks eerily like Emperor Franz Joseph corrects the teenage Jack from his error of posing an uneducated opinion.

While Lewis thought he was simply engaging in small talk, he soon discovered that Kirk never permitted substance-less discourse. All claims must be based on evidence, all terms used with precision. Lewis exclaims that this education “was red beef and strong beer”: “Here was talk that was really about something.” The Old Knock trains him in how to sift through pedantry for purpose. Lewis was learning how to love Latin or Greek or logic by observing how these teachers approached what they taught.

Teachers have formed me, as I expect they have formed others. At Baylor University, I was a graduate student and enrolled in David Lyle Jeffrey’s “Bible and Literary Criticism” course. Every week, Jeffrey assigned Bible reading along with the pages from Origen, Dante, TS Eliot, usually amounting to 200 pages a week. I was also enrolled in three other heavy courses, so I often skipped the Bible assignment. One week, Dr. Jeffrey called me on it. Imagine sitting before him, your rolling chair pulled up to the plastic white table, as he reclines before you, a figure with the height and belt-buckle of John Wayne but with a Scottish-Canadian accent and bright silver hair.

When he asked about whether I had read the assigned passage, I shrugged, “I’ve read it before.” With a sparkle in his eye and a hardy laugh, he responded, “Yes, the Bible was meant to be only read once.” I have never forgotten the humiliation of that moment and its serious lesson about the Bible’s priority in my study. This past spring, I taught the Bible and Western Culture with required passages assigned daily. I copied my master teacher.

I also had the great privilege of learning from Professor Louise Cowan. When I enrolled at the University of Dallas in the Masters of English program, I knew nothing of her. I was 22 and teaching at a classical school. It had a waiting list, but somehow, I fought my way into her seminar on Faulkner, followed by another on Russian Literature, and later visited her apartment to discuss my dissertation on Dostoevsky and Flannery O’Connor.

She was 88 when I met her and 92 the last time I saw her. Yet, she addressed my engagement with great books as though hearing them fresh. When she passed away a few years later, her son was reading Dante’s The Divine Comedy at her bedside. While I can still hear her voice in my mind, I cannot remember all the notes I took in her classes. But she showed me that the books she assigned were not fodder for the mind. Dr. Cowan loved the works she taught as beautiful gifts meant to draw out the best in us.

At the end of the day, learning should not be a matter of collecting information. We assess the truth of whether the permanent things matter by how they can be lived, how we see them lived in the lives of our teachers. Cowan writes, in the introductory remarks to her book Invitation to the Classics,

It is not enough for [classics] to be known about; they need to be truly known in the fullness of their intimacy. Taken in and savored, they become a way of understanding oneself in relation to larger power of the human soul.

Cowan shares, in this essay, that she re-read the Iliad, Oedipus Rex, Hamlet, The Divine Comedy, and other classics every year. What we repeat, we memorize; what we memorize, we truly know. While I used to be spellbound by teachers who could call up passages of texts whenever they needed them, as a teacher, I now know the repetition is what creates that knowledge.

[The Classics] have no life except in their readers; in them, they are living presences that come to be known from inside—with the heart as well as the head.

If teachers become what they teach, then they never have to fear about creating their own disciples. Rather, students will follow what they are taught—the Bible, Homer, Dante, Dostoevsky.

When I imagine what this process looks like, it is a lot like the final scene of Ray Bradbury’s Fahrenheit 451. All the details of this futuristic novel have not stayed with me, but I will never forget the ending. As the city burns to little more than a heap of white powder in the distance, a group of outcasts travel along railroad tracks. The main character, a former book-burner named Montag, on the run from the law, joins the exiles and introduces himself. In turn, they respond:

"I am Plato's Republic . . . I want you to meet Jonathan Swift, the author of that evil political book, Gulliver's Travels! And this other fellow is Charles Darwin, and-this one is Schopenhauer, and this one is Einstein, and this one here at my elbow is Mr. Albert Schweitzer, a very kind philosopher indeed. Here we all are, Montag. Aristophanes and Mahatma Gandhi and Gautama Buddha and Confucius and Thomas Love Peacock and Thomas Jefferson and Mr. Lincoln, if you please. We are also Matthew, Mark, Luke, and John.”

In a world that burned books, a group of castaways has memorized the classics and is bodying them forth. They are the living tradition, pilgrims memorizing the great stories, philosophy, poetry and passing it on, knowing that, in spite of all of the violence and ignorance of the world, what they are remembering will endure.

Students need models who show them how to love what is worth loving. Every semester, students knock on my door concerned because Plato said this but Aristotle said that; Kant said this but Nietzsche said that, and so on. I advise them to look not only at the arguments but more so at the lives: who do they want to be like? You might think Ivan Karamazov has the best argument against the goodness of God, but, at the end of my life, I would rather body forth Zosima’s story to tell. What we are all asking is the age-old question, how shall we live? And, the strongest test of the worth of what we teach is in how our students become what they have learned.

On 31 March 2020 I resigned my position as an associate professor of humanities at John Brown University, where I have taught for seven years. Before this role, I had taught at other schools for nearly ten years. I love teaching, but I am finding that the changing academy means I must change how I consider my calling and who my students are. As I have learned so much from books, articles, lectures, interviews, and podcasts, I hope to be able to teach through those media going forward. So, do not hesitate to contact me with your suggestions and proposals.

Roberto Calasso and the Progress of the Novel

Scott Beauchamp on Roberto Calasso's achievement and the future of the novel. 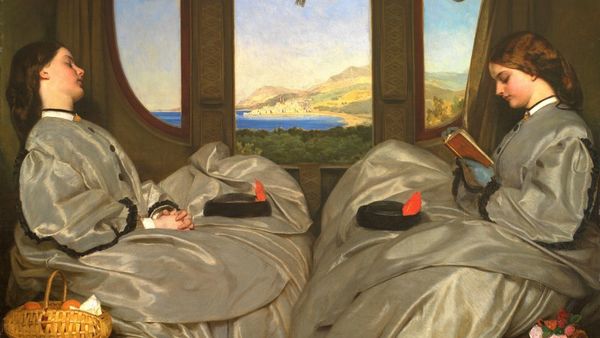