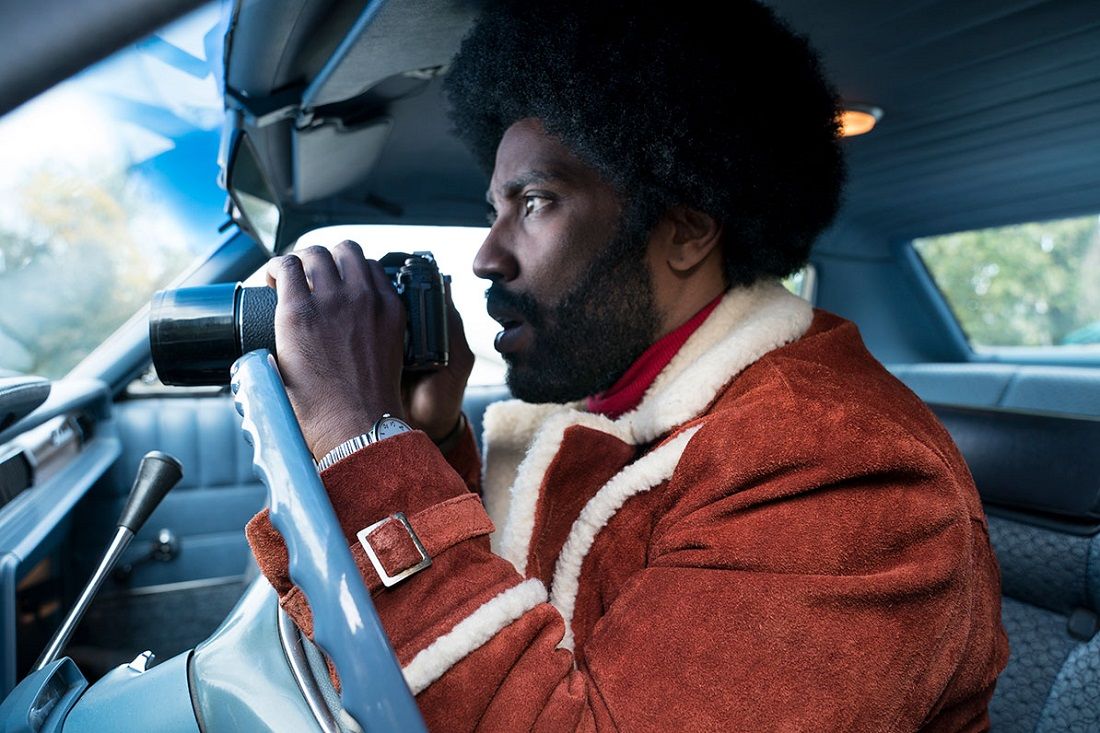 Spike Lee’s newest joint BlacKkKlansman (2018) opens with an iconic scene from Gone With the Wind (1939). Scarlett O’Hara walks through a maze of wounded soldiers after the Battle of Atlanta. The film’s score transitions to Taps and the camera pans over a tattered Confederate flag. It is a grand spectacle of loss. Lee jumps to Alec Baldwin portraying Dr. Kenneth Beauregard, a white supremacist producing some species of “informational” video that touts the travails of whites; his words are vitriolic and his tone is incendiary in reaction to that tattered Dixieland banner. Dr. Beauregard is trying too hard, though, and he is a caricature just like his public awareness campaign. It is an absurdist entry into the film—the viewer can chuckle a bit and feel some relief having thought he might be made a little uncomfortable by the film’s themes. However, Lee’s opening sequence is clarified throughout BlacKkKlansman, and the question that remains through the film’s powerful, emotionally throttled end, a question meant to haunt the viewer, is stark: how can a tattered red, white, and blue hankie still fly in the winds of this nation?

Adapting Ron Stallworth’s 2014 memoir Black Klansman, Lee captures well the internal and external conflict faced by the film’s protagonist (John David Washington) who becomes the first black police officer in an all-white Colorado Springs Police Department. Ron is caught between two communities and, therein, two narratives. His police chief (Robert John Burke) seems to be well-intentioned when it comes to race relations, but he never quite buys in to the reality of the societal evils present around him. He sees the local chapter of the Ku Klux Klan as a gang of temperamental hillbillies—what real harm could they have planned? This is the sentiment shared by nearly all of the department, though some officers themselves are explicitly racist and fiendish. Chief Bridges’s bigger concern, and the first undercover operation for Ron, is the possibility of a race war being initiated by a Black Civil Rights activist speaking at a rally sponsored by the Black Student Union of a local college. Ron attends the rally and is surrounded by a different community: black men and women chanting “all power to all the people” as they listen to Kwame Ture (Corey Hawkins) speak from a podium covered with a placard reading “POWER.” Patrice, the president of the Black Student Union, gets the romantic attention of Ron. Throughout the film she will question Ron’s lack of clear allegiance to the “revolution” so central to her community. Ron stands astride two narratives: one is marked by passivity and good intentions, the other seeks justice and refuses to be compliant.

Lee clearly pushes this tension into absurdity when Ron decides to infiltrate the Colorado Springs chapter of the Ku Klux Klan and its distinctively third way of storytelling. Contrasts abound, and the subtle internal tension becomes a series of dramatically polarizing scenes. Ron’s fellow detective Philip Zimmerman (Adam Driver) heads up to meet with the KKK as the “real-life” Ron Stallworth while Ron works the “Organization” (the self-appointed title of the Klan) over the phone. The members of the Klan are outrageous in their racism, their bigotry, their absurdity. Lee humorizes their qualities to the point that they seem to take on clown-like characteristics. The viewer likely considers, “How can they be taken seriously?”

The absurd can be discounted and discredited. Any tank-top wearing, revolver-toting, card-carrying member of the Ku Klux Klan who uses words like “gooder” and owns a full-scale lie detector that he keeps in his basement to prevent the infiltration of Jewish spies into the “Organization” is a joke that needs to be brushed off and forgotten. This is the entire point for Lee. America has brushed off the absurd. It has also forgotten a most diabolical evil in favor of caricaturing it so as to soften it, shake its head at it, roll its eyes at it. Lee does not leave the viewer with these images of absurdity, though. One of the most horrifying moments of the film comes when the KKK holds a special ceremony for David Duke (Topher Grace), the Grand Wizard of the Ku Klux Klan. The event is contemporaneous with a meeting of the Black Student Union gathered to hear the story of Jesse Washington as told by Jerome Turner (Henry Belafonte). While the Klan performs their rituals below an American flag and jeer during a showing of The Birth of a Nation (1915), Mr. Turner recalls for the students his experience in 1916 of seeing Jesse Washington, a black teenager accused of raping a white woman, being publicly tortured and killed in Waco, Texas. The details of this heinous event are told clearly and passionately, and enlarged images of the murder of this adolescent are displayed for the students—and for the viewer. It is a rare photographic glimpse into the lynching of an adolescent. It is no longer absurd. Instead, it is archived in America’s soul. This happened, and wearing tank-tops and using “gooder” as an adverb does not give America a reason to brush it off. “You need to wake up!” both Patrice and a fellow officer say to Ron in the film in two different contexts, but it is clearly Lee’s command to the viewer.

The power of Spike Lee’s work comes in this juxtaposition of absurdity and atrocity—the real tension of the film. Alec Baldwin’s Dr. Beauregard makes the viewer scoff as he passionately pleads for America to reclaim its greatness, even while coughing between takes and being praised by a staffer offstage for his heroism. He wants that Dixieland icon to hang high once again. Lee gives the viewer the opportunity to brush it off, but this only proves his point, for as the plot develops, images of the absurd become photos and videos of America’s atrocities. The film closes with a seamless transition from the dramatized Klan’s cross burning in Colorado Springs with Ron and Patrice looking on from their apartment, to amateur video footage of the 2017 violence in Charlottesville. Flames continue, though now on the torches of white nationalists. The footage is emotionally and mentally disturbing; multiple shots of James Alex Fields driving his car into a packed street of protesters should disturb anyone. Would it matter if he had a lie detector in his trunk? This really happened. “You need to wake up!”

The film ends with a tribute to Heather Heyer who died as result of Fields’ attack: “Rest in Power.” The last image for the viewer is an inverted American flag that fades out of color and seemingly, hauntingly, leads back to Lee’s question: why does the tattered hankie still fly?

Featured Image: Promotional material from the BlacKkKlansman website, Fair Use. 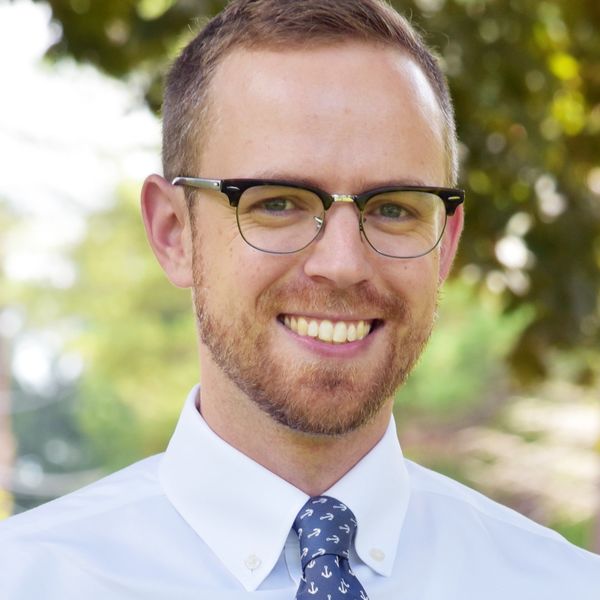 Christopher S. Gruslin, M.Div., is a theology teacher in Massachusetts. He cajoles his eighth graders and sophomores towards lives of faith and virtue while they instruct him in the spiritual discipline of humility.