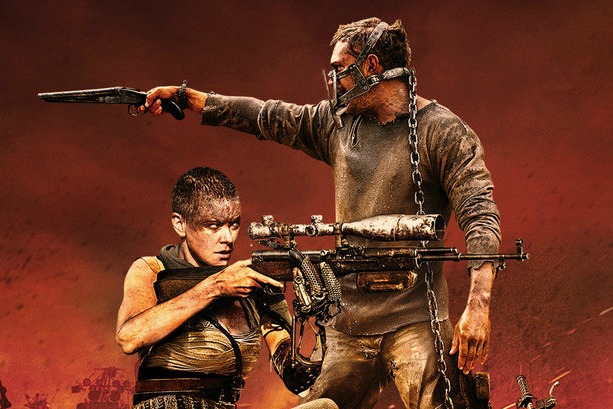 Editors’ Note: In anticipation of the 88th Academy Awards on February 28,
we present a series exploring the philosophical and theological elements in each of the eight films nominated for Best Picture. (Caveat: spoilers ahead.)

When I told my roommate I was writing a review for Mad Max: Fury Road, the first thing he asked me was, “What is redeeming about it?” For those who have not seen the film, the fact that it has been nominated for ten Academy Awards including Best Picture may come as a surprise. The trailer depicts a high-octane, adrenaline-fueled dystopian action film with promises of car chases, explosions, great visual effects, grotesque imagery, and heavy amounts of violence and mayhem. To be sure, the film fulfills the expectations set by its trailer, living up to its title as a truly “mad” film. Yet, to the pleasant surprise of many viewers, the genius of this film lies in its ability to achieve what is a truly brilliant spectacle without sacrificing narrative depth. In this film, dystopian imagery and a minimal script combine to present the audience with a compelling story that touches on themes of survival, hope, and, most prominently, redemption in a fallen world.

Although this is the fourth installment in the genre-defining franchise which catapulted Mel Gibson into stardom, no knowledge of the previous films is necessary in order to watch Fury Road. In this installment, produced more than thirty years after the original, actor Tom Hardy (The Dark Knight Rises) steps into the role of Max Rockatansky, who was “once a cop, a road warrior searching for a righteous cause” but who now wanders a desolate wasteland. Haunted by ghosts of the people he could not save, Max’s sole objective is to survive and to do so in solitude. This time, however, Max is forced to team up with the scene-stealing Imperator Furiosa played by Academy Award winner Charlize Theron (Monster’s Ball). Furiosa, a one-armed lieutenant for a vicious tyrant named Immortan Joe (Hugh Keays-Byrne, who also played the villain in the original Mad Max), makes a daring attempt to free the tyrant’s harem of five wives and to bring them to a safe and fertile land known as the “green place,” which is inhabited by a tribe of women known as the Vulvalini.

“Who killed the world?” The runaway wives of Immortan Joe demand this question several times throughout the film. Although sound clips played over the opening credits reveal that a nuclear war over oil and water had resulted in the collapse of civilization, the repetition of this question by the most innocent of the film leads the audience to consider the moral responsibility of the remnants of humanity. Everything about the world in which they live—violence, subjugation of the masses, objectification of women, the allure of a bizarre vehicular-based cult—arises out of an instinct to survive. When pushed to the brink of extinction, the rationality of the world began to disappear; people were broken; and as Max remarks in the opening of the film, “It was hard to know who was more crazy: me or everyone else.” In a way, each character in the film has borne some share of responsibility in the death of the world, and as our protagonists struggle for their personal redemption, so too does the redemption of the world come into view.

George Miller, who has written and directed each film in the series, makes a daring yet brilliant move by having his titular character take a backseat role for most of the film. Max only joins Furiosa, the film’s true protagonist, on her crusade simply because he has no other means of attaining his survival. Indeed, for most of the film, Max is completely devoid of hope and exhibits few heroic qualities. But as he journeys with Furiosa and the five wives, Max is slowly forced to step back into the role of hero until he finally reclaims a driver’s seat within the narrative, moving closer to redemption.

Furiosa is also in search of redemption. When we are first introduced to her it is implied that she has served in Immortan Joe’s regime long enough to be one of his most trusted lieutenants, leaving the viewer to imagine the nature of the many acts she must have carried out over the years in order to earn the tyrant’s trust. She is convinced that in delivering the five wives to her homeland, the “green place,” and to the Vulvalini, that she will finally obtain the redemption she seeks. But, when she discovers that her idyllic homeland has fallen away along with everything else, Furiosa is pushed to the brink of despair and holds only to a fool’s hope of finding another place where she can leave behind the sins of her past.

Max’s moment of redemption arrives after the climactic battle, when he transfuses his own blood to the critically-injured Furiosa. It is in this moment of a literal giving of self that Max’s redemption is completed, signified by the final revelation of his real name to the unconscious Furiosa, something which he had previously refused to share. The only people who call Max by name are the ghosts that haunt him, and his earlier refusal of his name is indicative of his desire to leave his former life behind him. But, as the turning point of the narrative suggests, at some point the only way for the protagonists to achieve redemption is to stop running and face that from which they were running all along.

What is it that redeems Mad Max: Fury Road? For some, there may never be enough to make up for the violence, mayhem, and grotesque images on display in a film that seems to have no other purpose for existence than entertainment. Yet everything offensive that happens in the world of Mad Max seems to be borne out of circumstance, and choices are made simply out of a desire to survive. Perhaps, then, the value of Mad Max: Fury Road lies in the question it ultimately poses to the audience, “When the world is riddled with evil, where does redemption lie?”

Austin Cruz is a second-year student in the Master of Theological Studies program at the University of Notre Dame.