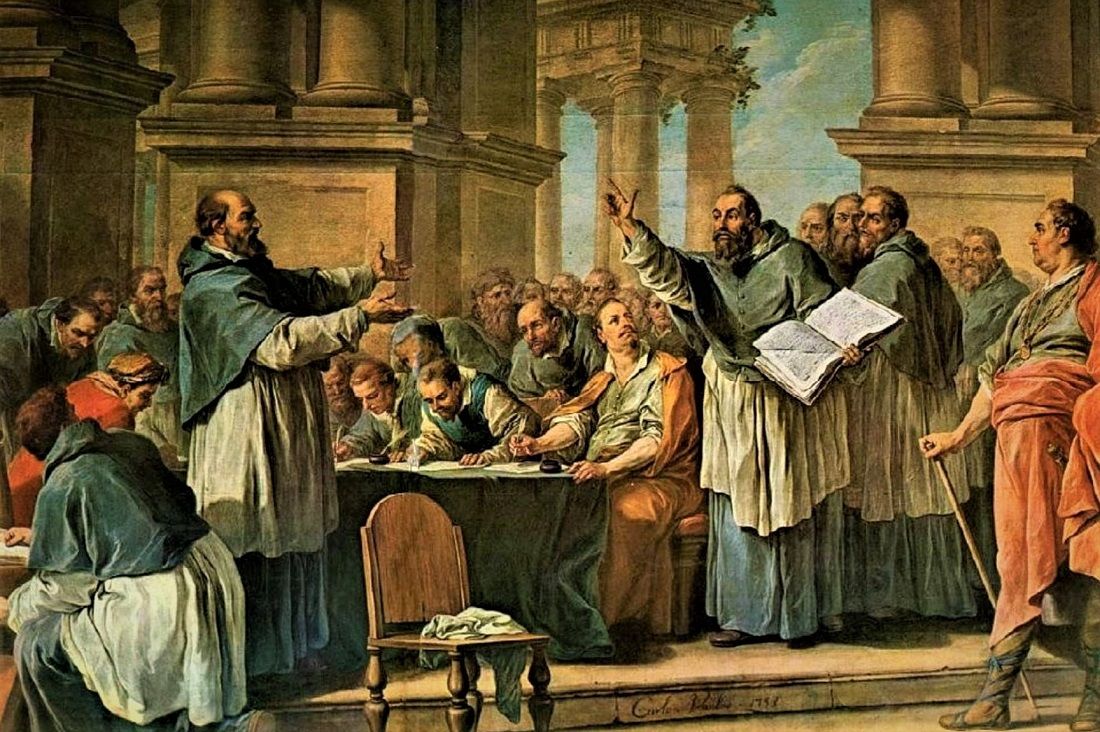 In the West we learned from St. Augustine to despise schism, or at least we should have. If we sufficiently understand it in its ecclesiological and Christological import, we should take it for what it is: the rending of Christ’s body. We have Augustine to thank for this stark diagnosis, just as we have him to thank for a remedial understanding of the Church’s unity, grounded as it is in Christ’s action in the sacraments. But as we celebrate his feast day once again, it is perhaps useful to think carefully about that diagnosis in full. At the moment, the Church spread across the orbis terrarum, as he liked to denote it, appears to careen haplessly from one scandalous revelation to the next. And no one version of the ever-growing series of charges need be true to justify the pain felt by so many.

Pain. Some of us who study the events and texts of the early Church can easily overlook the fact that it likely occasioned the controversy that took its name from an otherwise unknown leader named Donatus and that allowed Augustine to forge some of his most penetrating theological insights. I often overlook it. We have Augustine to thank for this oversight in part. As he does in so many contexts, Augustine persistently sets the terms for the phenomenon of schism by reference to the vice of superbia (pride). Insofar as it is a sin against the bond of charity, schism, like every other sin, traces its roots to the rotten soil infected by pride. The latter is simply an inordinate and so ultimately false love of self. In the end, there remains something quite right about this claim, and not least because of its scriptural warrant (Sir. 10:12–13). But I was recently struck by the thought that in its current state the American Church perhaps shares in something that led ancient North African Christians to allow divisions among themselves. Pain.

The details surrounding individual actions during the Diocletian persecution are difficult to sort out, whether among clergy or laity. But it seems clear that when imperial forces came knocking on doors during the first decade of the fourth century, some confessed the faith, by refusing either to hand over the Scriptures or to make sacrifice to the gods. They paid for it with torture or worse. Some, however, failed to confess.

To whatever extent any among the clergy participated in, or advocated compliance with, authorities in these ways—to that extent they gave rise to the notion among some North African Christians that the Church’s legitimacy was sorely compromised. This, they claimed, warranted a clean sacramental slate. Such a move entailed the rejection of certain (potentially) compromised clergy, or those ordained by such lapsed brethren. These clerics were thought to be devoid of the capacity to celebrate valid sacraments. It was the second time in as many centuries that Christians in the region faced the difficult prospect of reconciliation on the heels of persecution.

Whatever the facts on the ground may have been, it is hard to believe Augustine’s diagnosis was entirely wrong. Whether at the outset of the controversy or in his own day (decades later), at least some Donatist bishops, presbyters, and laity rivaled Augustine and his fellow Catholics on account of an insidious pride. They broke rank with the universal Church—or perpetuated the fissure a generation or two later—under the presumption of clerical holiness and ecclesial purity. But another of Augustine’s trademark insights must also be kept in mind here: the complexity of the human heart, its movements, its reasons. Thus it seems equally hard to believe that the shared presumption of purity alone was enough to sway no small number of people. By some accounts, at the time of Augustine’s ordination to the priesthood and elevation to the episcopacy Donatists outnumbered Catholics in parts of North Africa.

No, it must also be true that the schism nourished by superbia was in part spawned amid the aching dolor of a vulnus inflicted upon the people of God. That is, Augustine was right to assert that knowingly to follow sectarian shepherds in his day was insolently to participate in a facade of purity. But at the outset, and perhaps not only then, there were surely many among the faithful who had confessed or who felt themselves ready to do so if need be, yet apart from any pretense of moral perfection. And it seems reasonable to think that many of these were pained by what they took to be a failure in fidelity by yet other shepherds. This is the pain that is easy to forget. Or, at least, it was for some of us, until now. While very few will ever be faced with the prospect of torture and martyrdom, so many of us now know what it is like to feel the pain of betrayal simply by being among the members of a communion. This is to say little, regretfully, of the victims of abuse themselves.

Seen in this light, then, schism may be understood not as the initial wound, but rather as the rotting infection of a prior wound, its pain compounded first by a failure to acknowledge the damage.

It is true that Augustine largely fixed his polemical sights on the leadership among his opponents. He was keen to underscore their responsibility in the matter. And it is also true that at times he allowed for the possibility that some among the Donatist faction were not actually guilty of lacking the bond of charity. They might, he reasoned, be unaware of the status and guiding assumptions of their communities. But by and large this is not our takeaway from Augustine’s sermons, scriptural commentaries, and treatises. Almost without remainder he took direct aim at a movement which, for all his own complex motives, he sincerely understood as a wound in Christ’s own flesh (cf. ep. Io. tr. ii.3).

And so to honor his legacy we may do well first to depart briefly from this feature of his assessment, if only to spend sufficient energy simply acknowledging the pain. To do so is also to acknowledge the Church’s profoundly ambivalent character here below, its woefully "mixed" state, to borrow again from Augustine’s own terminology. What else but grief can grip the hearts of so many of us who have sat in the pews during these recent days? Many of us hold our children tightly, waiting for we do not know what. Any word at all that rightly acknowledges the hurt and the confusion. Perhaps this simple recognition, devoid of any form of defensiveness, will be the first step off a path that undoubtedly leads to various forms of schism.

Surely, there will be no substitute for reform—procedural reform of the institution, no less than moral and spiritual reform of the mystical body. And here, too, we do well to honor Augustine’s legacy, this time learning from him. Reform, like much else, cannot proceed without its own profound impetus of self-examination, imbued with superbia’s opposite, humilitas. But, of course, true humility is hardly inimical to truth-telling and to accountability.

But we owe it to Augustine also to ground our pursuit of charity, our eschewal of schism, in something even deeper than a response to a specific situation. We owe it to Augustine, but really to ourselves and to those who depend on us, to understand the Church as he did, first and foremost as the very body of the totus Christus, the "whole Christ." This understanding should, in fact, deepen our pain as well as our resolve toward reform. But this it should do by giving us an eschatological hope made present here only in ictu and apparent to us only when we have eyes to see it.

Schism takes many forms. Pain will drive some to exemplify its most typical sense, a departure from the Roman Catholic communion for another, or for no communion at all. For others it will be harder to identify, but perhaps much more pernicious. We might remain in communion outwardly but rend Christ’s body by breaking the bond charity within our hearts, intending to speak the truth in love, but in practice proudly making facile accusations and prescriptions.

But if Augustine is right, there is no guarantee against any of these forms of schism, understandable though they may be in light of the aforementioned pain, other than the objective fact of the Church’s identity as Christ body. If this is anything other than an identity anchored in Christ’s person, in his historical life, and in his ongoing work in the world through the power of his Spirit, ours is surely a path headed for schism, and worse. For, on that telling of things, ours is a future and an identity dependent wholly upon us. However, like the sacraments that make the Church what it is, the Church’s identity is dependent first upon Christ’s work, and only then upon our cooperation.

This sacramental, and so ultimately Christic, grounding is not some magical remedy—magical in its propensity to make the pain disappear, or magical in healing our sinful state apart from a penitent disposition and concrete steps to protect Christ’s members. The very real capacity of the sacraments to bind the broken Church to her disparate self and to her Spouse (the sacraments’ objective efficacy, ex opere operato) is hardly divorced from their pedagogical character (their subjective efficacy) wrought in the minds and hearts of the faithful. They are two sides of the same precious coin for Augustine:

The whole redeemed city, that is to say, the congregation or community of the saints, is offered to God as our sacrifice through the great High Priest, who offered Himself to God in His passion for us, that we might be members of this glorious head, according to the form of a servant. For it was this form He offered, in this He was offered, because it is according to it He is Mediator, in this He is our Priest, in this the Sacrifice . . . This is the sacrifice of Christians: we, being many, are one body in Christ. And this also is the sacrifice which the Church continually celebrates in the sacrament of the altar, known to the faithful, in which she teaches that she herself is offered in the offering she makes to God (civ. x.6).

We return to the table of this sacrifice, lay and clergy alike, where we intend to glimpse—in ictu, in a flash—the hope made present to us, but only fulfilled in the eschaton. In the same way, we turn to the many among us who continue to administer the salve of true charity in words and deeds, unflappable amid the current storms. Here too we see our true identity. As we acknowledge the pain of abuses and humbly pursue reform, it must be to this truth above all that we cling, grateful that it transcends our shared sinfulness. 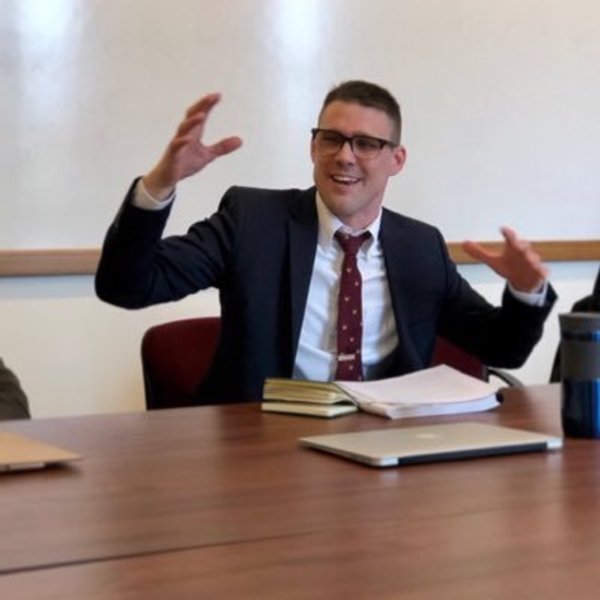 Ty Monroe is a husband, a father, and an Assistant Professor of Theology at Assumption College. His most recent work, Putting on Christ: Augustine's Early Theology of Salvation and the Sacraments, was published in 2022 with The Catholic University of America Press.