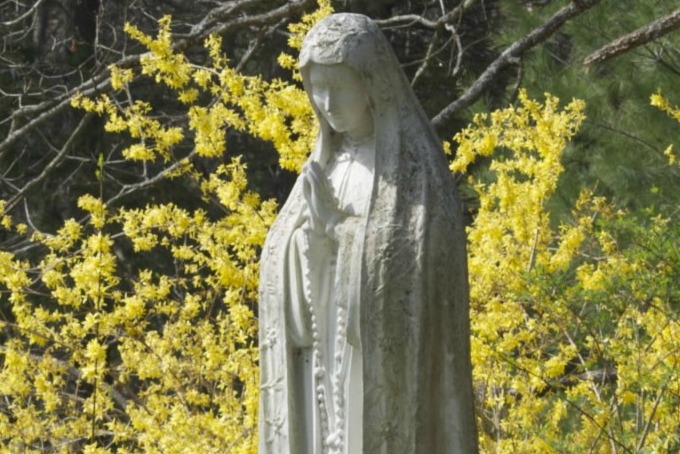 “We must not be afraid to go into the desert and to transform it into a forest!” With these words Pope Francis challenged hundreds of people gathered on April 24, 2016 for the “Village of the Earth” event which was promoted by the Focolare Movement and Earth Day Italy. During his surprise visit that lasted more than an hour, the Holy Father drew attention to "the many deserts in the cities.” Recalling his own experiences from Argentina, he noted that these deserts are located in the gated neighborhoods, in prisons, and wherever people live in subhuman conditions. Most deplorably, the pontiff observed, we find such deserts in every human heart!

In a famous little book on modern education, The Abolition of Man, the English Christian apologist C. S. Lewis wrote on the same theme and even used the same metaphor and imagery that Pope Francis employed of transforming a desert into a verdant landscape. Desert experiences are ugly, and we avoid them when we can. Yet, the Bishop of Rome emphasized, “We must not be afraid to go to the desert in order to transform it into a forest, [where] there’s exuberant life … and where everyone can smile.”

With his appeal Pope Francis organically connected the deserts of the world at large with the wasteland in each human heart, the inner world that is often hidden to the outside. During this Year of Mercy, our Holy Father has repeatedly challenged us to look into our hearts and root out behaviors and attitudes that lack mercy. By courageously addressing our own need for tenderness, respect, forgiveness, and friendship, we will know how to reach out to others. As a result, “the miracle will happen” within each one of us, first, and eventually in our neighborhoods, workplaces, and social circles.

There is a saying that three things are left over from Paradise: stars, the eyes of children, and lush gardens. They awaken within us a longing for the infinite, harmony, and beauty. They remind us of God’s goodness of which we have glimpses already now, but not yet fully. The metaphor of the world as a garden, a field, or forest is explored in Scripture, art, poetry, and literature. Already in the second chapter of Genesis (vs 8f), we read about God’s original plan of the world as a paradise garden with the Tree of Life planted at its center, from which flow streams of clear water. Isaiah (32:15) describes the wilderness becoming a fertile field that is considered a forest. Similar references are found in Psalm 96:12, 1 Chronicles 16:33, Isaiah 44:23, and Ezekiel 47:7-12. In his first Letter to the Corinthians (3:7) St. Paul notes that each one of us is “God’s field” and that it is ultimately God who makes things grow in this field though we need to create suitable conditions for life to germinate and bear fruit.

The comparison of the church to God’s field or garden reaches back to the early church. Ignatius of Antioch was the first to use the metaphor of the Church as a plantation of the Father (Philad. 3,11 13; Trall. 11,1). Clement of Alexandria, Cyprian, Origen, Gregory of Nyssa, and Augustine further elaborated the image, comparing the variety of trees, shrubs and flowers to the baptized Christians, who in accord with their being, exercise their mission as “blooming” members of the Church. Weeds, which have not been planted by the Father God, symbolize erroneous teachings in need of eradication.

The prototype of God’s Garden is Mary; she is the fully perfected figure and type of the Church. During the Middle Ages, a passage from the Song of Songs was applied to Mary, the bride of Christ: "You are an enclosed garden, my sister, my bride" (4:12). As Marian devotion increased, the metaphor of the enclosed garden became quite popular. Artists depicted Mary as Hortus conclusus, an enclosed garden; its flowers and herbs symbolizing her virtues and intercessory power. Presumably, the best-known allusion to Mary as God’s Garden is found in the Paradiso of Dante’s Divine Comedy (Paradise 23:70-73). The pilgrim-soul, Dante, is so enraptured with the smile of his beloved Beatrice that he has not looked to the Blessed Virgin Mary and the Garden of Christ’s love. Around the time that Dante wrote his glorious poetry, cloisters and monasteries planted Mary Gardens with neatly arranged flowers, herbs, vegetables and fruit trees around a wayside shrine or grotto dedicated to the Blessed Virgin. In our own time, Mary Gardens have celebrated a comeback.

Creating a Mary Garden could be a unique response to Pope Francis’ challenge of turning a desert into a forest. The month of May, when Spring is in its fullest splendor at least in the Northern hemisphere, is traditionally dedicated to Our Lady, at least since baroque times (cf. Johannes Nadasi; Theophilus Marianus, 1664; J. X. Jacolet, Mensis Marianus, 1724). May altars, May devotions, and May crownings are expressions of daily spiritual exercises in honor and imitation of Mary. By creating a Mary garden we can join the Church’s tradition to honor the Queen of May. At the same time, a well-tended garden will last throughout summer and fall and thereby become an oasis for others to be uplifted as well through the turning seasons.

A Mary Garden can be as small as a flower-pot or as large as your yard. Those deprived of garden space can also create an indoor Mary Garden. At its center is a statue or waterproof plaque of Mary, which is surrounded by trees and flowers of your liking. Many Mary Gardens include herbs and flowers that are somewhat related to Our Lady’s beauty and virtues as well as the joyful, sorrowful, and glorious events of her life. Choosing plants, placing them in the plot, watering, weeding and hoeing our Mary garden may simultaneously have a transforming effect on the secret garden of our hearts. The hard work that needs to be done is cultivating within ourselves a love that is about giving ourselves totally to others forsaking our own needs and tending to those we encounter with mercy and charity. Then, indeed, the miracle will take place.