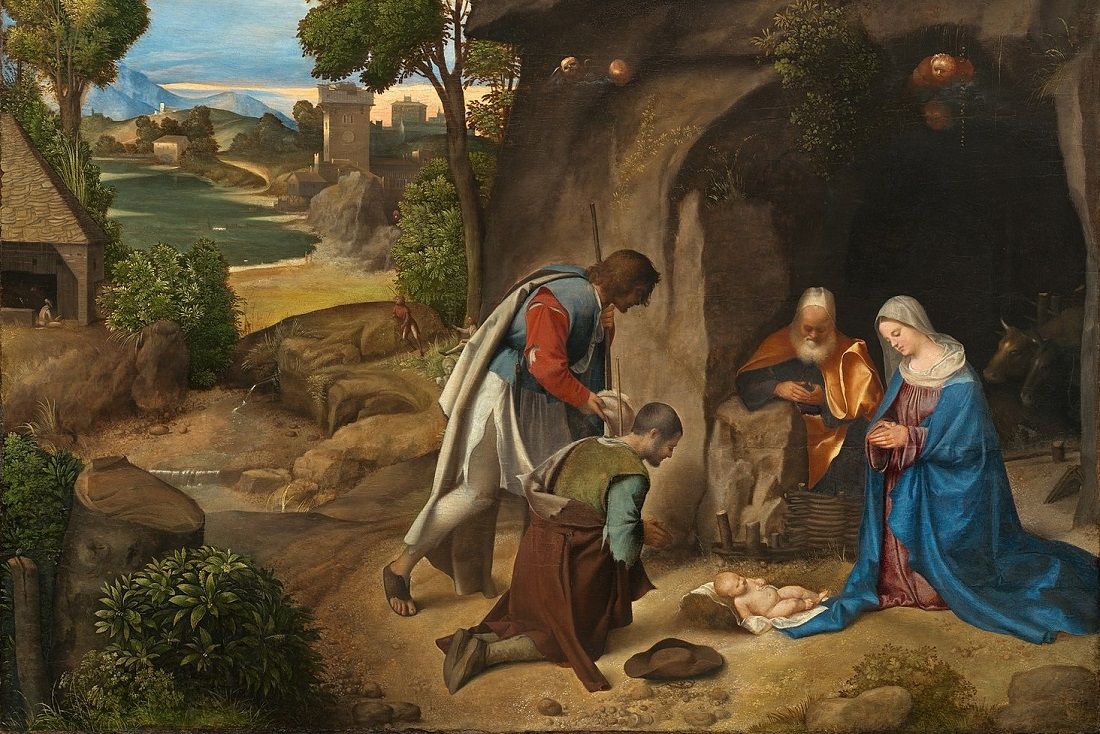 The Nativity
by G.K. Chesterton

For unto us a child is born. —Isaiah

The thatch of the roof was as golden,
Though dusty the straw was and old,
The wind was a peal as of trumpets,
Though barren and blowing and cold:
The mother’s hair was a glory,
Though loosened and torn,
For under the eaves in the gloaming—
A child was born.

O, if a man sought a sign in the inmost
That God shaketh broadest his best,
That things fairest are oldest and simplest,
In the first days created and blest:
Far flush all the tufts of the clover,
Thick mellows the corn,
A cloud shapes, a daisy is opened —
A child is born.

With raw mists of the earth-rise about them,
Risen red from the ribs of the earth,
Wild and huddled, the man and the woman,
Bent dumb o’er the earliest birth;
Ere the first roof was hammered above them.
The first skin was worn,
Before code, before creed, before conscience—
A child was born.

What know we of aeons behind us,
Dim dynasties lost long ago,
Huge empires like dreams unremembered,
Dread epics of glory and woe?
This we know, that with blight and with blessing,
With flower and with thorn,
Love was there, and his cry was among them—
“A child is born.”

And to us, though we pore and unravel
Black dogmas that crush us and mar,
Through parched lips pessimistic dare mutter
Hoarse fates of a frost-bitten star;
Though coarse strains and heredities soil it,
Bleak reasoners scorn,
To us too, as of old, to us also—
A child is born.

Though the darkness be noisy with systems,
Dark fancies that fret and disprove;
Still the plumes stir around us, above us,
The tings of the shadow of love.
Still the fountains of life are unbroken,
Their splendour unshorn;
The secret, the symbol, the promise—
A child is born.

In the time of dead things it is living,
In the moonless grey night is a gleam,
Still the babe that is quickened may conquer,
The life that is new may redeem.
Ho, princes and priests, have you heard it?
Grow pale through your scorn.
Huge dawns sleep before us, stern changes—
A child is born.

More than legions that toss and that trample,
More than choirs that bend Godward and sing,
Than the blast of the lips of the prophet,
Than the sword in the hands of the King,
More strong against Evil than judges
That smite and that scorn,
The greatest, the last, and the sternest—
A child is born.

And the rafters of toil still are gilded
With the dawn of the star of the heart,
And the Wise Men draw near in the twilight,
Who are weary of learning and art,
And the face of the tyrant is darkened,
His spirit is torn,
For a new King is throned of a nation—
A child is born.

And the mother still joys for the whispered
First stir of unspeakable things;
Still feels that high moment unfurling,
Red glories of Gabriel’s wings.
Still the babe of an hour is a master
Whom angels adorn,
Emmanuel, prophet, annointed—
A child is born.

To the rusty barred doors of the hungry,
To the struggle for life and the din,
Still, with brush of bright plumes and with knocking,
The Kingdom of God enters in.
To the daughters of patience that labour
That weep and are worn,
One moment of love and of laughter—
A child is born.

To the last dizzy circles of pleasure,
Of fashion and song-swimming nights,
Comes yet hope’s obscure crucifixion,
The birth fire that quickens and bites,
To the daughters of fame that are idle,
That smile and that scorn,
One moment of darkness and travail—
A child is born.

And till man and his riddle be answered,
While earth shall remain and desire,
While the flesh of a man is as grass is,
The soul of a man as a fire,
While the daybreak shall come with its banner,
The moon with its horn,
It shall rest with us that which is written—
“A child is born.”

And for him that shall dream that the martyr
Is banished, and love but a toy,
That life lives not through pain and surrender,
Living only through self and its joy,
Shall the Lord God erase from the body
The oath he has sworn?
Bend back to thy work, saying only—
“A child is born.”

And Thou that art still in the cradle,
The sun being crown for Thy brow,
Make answer, our flesh, make an answer.
Say whence art Thou come? Who art Thou?
Art Thou come back on earth for our teaching,
To train or to warn?
Hush! How may we know, knowing only—
A child is born?

G.K.Chesterton’s “The Nativity” treats its refrain—“A child is born”—as both the pivotal idea and a constant interruption to the rest of the poem. Chesterton walks us through a multitude of moods, half-thoughts, and moments in time, managing to connect this series of reassurances and human doubts with the thought that unites them all. In doing so, Chesterton reminds us that the Nativity is at once the most plausible and implausible moment in history. If the refrain that Chesterton uses is taken out of the context of the Nativity, then the child’s birth is wonderful, but part of the everyday and commonplace. Children are born all the time. It is the rest of the poem, with its description and musings about the rest of the story, that remind us how impossible it seems that God would become man, incarnate in the most vulnerable of ways.

The poem opens with a series of apparent contradictions. The thatch on the stable is golden, although it is dusty and old, the wind is whistling through the exposed space of the stable, and Mary is both glorious and haggard in the moments after giving birth. These concrete details we can imagine, despite all of their contradictions. We can picture the thatch and the wind and Mary’s face because those moments are commonplace. In many ways, the Nativity is a larger scale version of these contradictions, one that is harder to imagine because we lack the context but infinitely more important. Jesus’ birth is commonplace in that it had all of the worldly intrusions that Chesterton describes. It is these intrusions that help us to imagine the Incarnation more concretely. Sometimes it is these very details that allow us to grasp part of the immense love that is made present at Christmas.

At the same time, the poem's use of familiar imagery helps us to remember that the Incarnation was an event that took place in the world that we live in every day. The glory that Chesterton describes reminds us that that everyday world has been transformed. While the thatch on the roof may have been straw, it became the straw that covered the Holy Family, and on a larger scale a part of the world that God entered in a moment of supreme love. The descriptions that Chesterton begins the poem with allow us to see the beauty of the Incarnation, especially through the image of the Nativity. In some ways, this glory-infused, intensely physical moment teaches itself to us and calls us to remember and reflect on this incredibly concrete revelation of God’s love for the world.

After those beginning lines, the poem moves on to use its refrain as a reminder of how universal and timeless birth is. The miracle, in some ways, is not that Jesus was born, but that that birth was the same as ours. The poem paints childbirth, even in its more general context, as a return. It is a grounding experience that brings us out of ourselves, no matter the state we are in. This message, that children were born before us and will continue to be born after us, can be consoling, but also impersonal. If the Nativity had happened in more exalted surroundings, it might still be possible for us to imagine it as a glorious moment because of the importance of the Incarnation, but it would not have the unifying power of the glorified simplicity that Chesterton describes in the first lines of the poem. The Nativity brings this long history of births into focus in one crystallized moment, linking the rest of us through a love that transcends the distance between us.

Christmas is at once a moment of complexity and complete simplicity, both theologically and with respect to our day-to-day lives. It unites all of the apparent contradictions that are brought forward in this poem. Christmas combines the human and the godly, the commonplace and the glorified, and the cosmic and the personal with a startling compactness that makes some part of the mystery comprehensible to us. By doing so, it provides us with a focal point, both the the day and the entire liturgical year. The weighty expectations of Christmas come from all sides, religious, personal, and secular. When those expectations are combined with the almost constant background noise that surrounds us, it can be difficult to sift through and remind ourselves of the motivating force behind all of the hubbub.

While we celebrate the Incarnation every Sunday, that reality becomes particularly near to us at Christmas, when we focus on the moment of the Nativity with special attention. Throughout the rest of the year, there are easy distractions, things that we are called to do that we let become our focus and goal. At Christmas those distractions are often at least tangential to the central thought that we should be devoting ourselves to. The all-consuming nature of the commercial Christmas season that starts before Thanksgiving does serve a constant reminder that something spectacular is about to be celebrated. And through all of the business and background noise, we are presented with the image of the Nativity as a focal point and a reminder that sometimes a simple thought is the most we can cling on to, and for today that thought is: “A child is born.” 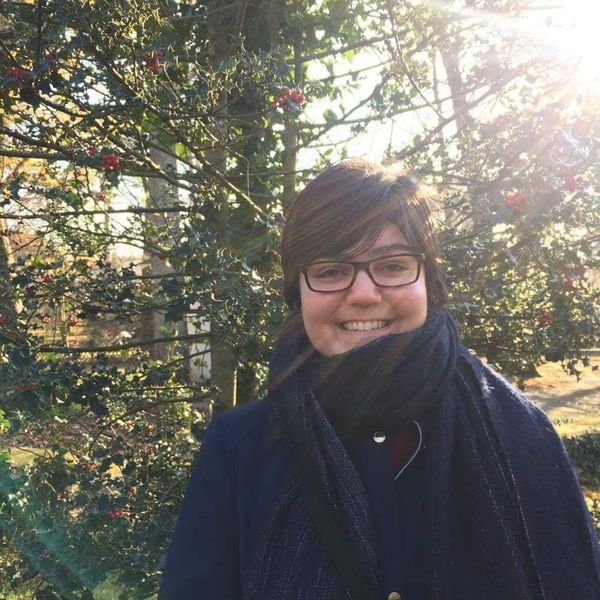