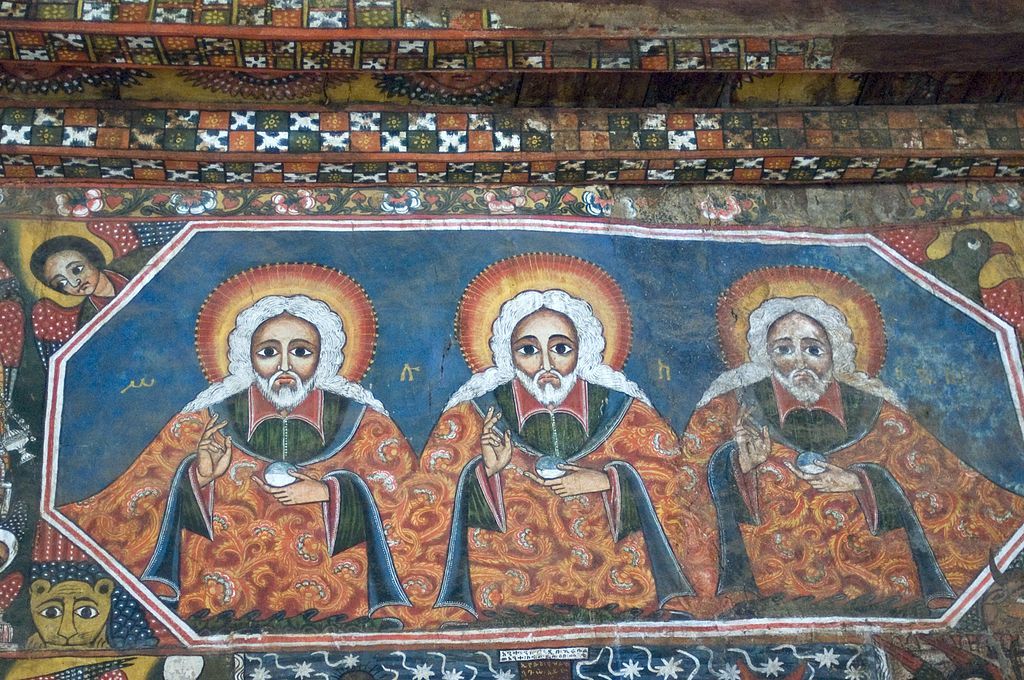 This weekend in the United States, we celebrate Trinity Sunday.  For the most part, our parishes will be inundated with a series of beige homilies, which celebrate not so much the mystery of the Triune God but the mathematical puzzle of 3 and 1. Those sermons that dare to preach on the Trinity itself will often apologize for the strangeness of the doctrine. The English syntax of the Collect Prayer for this particular feast embodies the challenges that any preacher faces in preaching this weekend:

God our Father, who by sending into the world
the Word of truth and the Spirit of sanctification
made known to the human race your wondrous mystery,
grant us, we pray, that in professing the true faith,
we may acknowledge the Trinity of eternal glory
and adore your Unity, powerful in majesty.
Through our Lord Jesus Christ, your Son,
who lives and reigns with you in the unity of the Holy Spirit,
one God, forever and ever.[1]

On one level, the complexity of preaching on this feast day pertains to its origins as "an idea feast," seemingly disconnected from a particular mystery in the life of Christ, of Mary, and of the saints.

In his magisterial Theological Dimensions of the Liturgy Cyprian Vagaggini, O.S.B., critiques the development of the feast in the eight and ninth centuries (the feast was approved for the universal Church by John XXII in 1334):

A liturgical feast is not to have for its object simply an abstract idea, but rather a historical event pertaining to our salvation, or, if you will, an idea perhaps, but one that has been concretized in one or more of the historical events of salvation history.[2]

The starting point of Christian reflection on the nature of God had been the experience of the radical nearness of God in Jesus Christ. How ironic and how lamentable it is, then, that what had originated as a teaching about God's radical nearness to us [the doctrine of the Trinity] should have become, within only a few centuries, a teaching about a self-sufficient godhead of persons.[3]

While agreeing with both Vagaggini and LaCugna that the feast presents challenges for the preacher, including resisting the urge to engage in unnecessarily complex (or perhaps more true for most of us, unclear and unsophisticated) theological discussions regarding the interior life of God, I would like to present a more optimistic reading of the potential of the feast for the Church, including the complex images employed in the Collect Prayer. That is, Holy Trinity Sunday does celebrate a particular event—the sanctification of the Christian (that is the participation of the Christian in the Triune life of God) and the entire world made possible through the liturgical life of the Church.

The doctrine of the Trinity, even in its classical expression focusing on the interior life of God (one God, three Persons) is fundamentally related to the mystery of love revealed in Jesus Christ (the economic Trinity). As Joseph Ratzinger writes:

In Jesus' prayer, the Father becomes visible and Jesus makes himself known as the Son. The unity that this reveals is the Trinity. Accordingly, becoming a Christian means sharing in Jesus' prayer, entering into the model provided by his life, that is, the model of his prayer. Becoming a Christian means saying 'Father' with Jesus and thus, becoming a child, God's son—God—in the unity of the Spirit, who allows us to be ourselves and precisely in this way draws us into the unity of God. Being a Christian means looking at the world from this central point, which gives us freedom, hope, decisiveness and consolation.[4]

Therefore, at the very heart of the doctrine is the peaceful salvation of the Christian—the manner in which every Christian life is defined by allowing the Word to become flesh in one's life, to offer up one's will, one's entire existence as a sacrifice of love. Such a gift of self does not annihilate the individual, precisely because the doctrine of the Trinity ensures that the Persons of the Trinity (Father, Son, and Holy Spirit) are "distinct" even in their unity. Walter Kasper, commenting on this fact, writes:

The complex formulation of the doctrine of the Trinity acknowledges that true unity, grounded in God's own life, does not destroy individuality but elevates it through love; simultaneously, the doctrine forms the imagination of the Christian to perceive that individuality is not possible without self-gift, without communion. The destiny of all of humanity is in fact hidden within the doctrine of the Trinity—the manner in which every particular human life, through initiation into the Church, becomes a form of divine life.

Thus, Trinity Sunday is a feast celebrating the salvation that takes place in the liturgy itself.  In liturgical prayer, we enter into the life of the Son, offering words of praise and lament made incarnate in the liturgical rites of the Church, to the Father. Our individual hopes and desires, our tragedies and sorrows, are not blotted out but rather become a single, nonetheless diverse gift of love offered to the Father. The affections, the insights that we come to, even our boredom in the midst of our celebration of the liturgy, is the very Holy Spirit coming to dwell among us, uniting us more closely to the Father. The Spirit of adoration, of love, that descends upon the assembly leads us forth from the celebration that we might offer the entirety of our lives as gift of love, bringing all of humanity and creation itself into the life of the Triune God through the priesthood of all believers.

In conclusion, Trinity Sunday is a feast celebrating the salvific pedagogy of the liturgy itself—the manner in which all of humanity enters into the self-giving love of God through full, conscious, and active participation in the liturgical rites of the Church. The young couple who prays the Liturgy of the Hours is not simply performing a mundane rite but allowing their common words (uttered in a different registers, with different emphases) to become Christ's own speech to the Father. Each Sunday, as Christians throughout the world gather into a single space, the plurality of narratives embodied in each person becomes one through the Eucharistic memory of the Church. We become one another's through the liturgy, the Church become icons of the Triune God through practicing such self-gift. In this way, Trinity Sunday is not an idea feast but an identity feast, an imaginative, hopeful, even daring contemplation of what God has planned for those who give themselves over to the logic of love sacramentally embodied in the doctrine of the Trinity; a logic of love pedagogically carried out in the liturgical life of the Church; a love that re-configures what we mean when we say "community." As Kathryn Tanner writes:

Let us, together with the entire Church, celebrate Trinity Sunday as a liturgical feast, one that forms us in the mystery that we are made for self-gift, for love, for a unity that does not destroy diversity but allows it to mirror the non-competitive, self-giving of the Triune God. For God became human that we might become divine.

[1] Opening Collect, The Most Holy Trinity.

[3] "Making the Most of Trinity Sunday", in Between Memory and Hope, ed. Maxwell Johnson, 257.