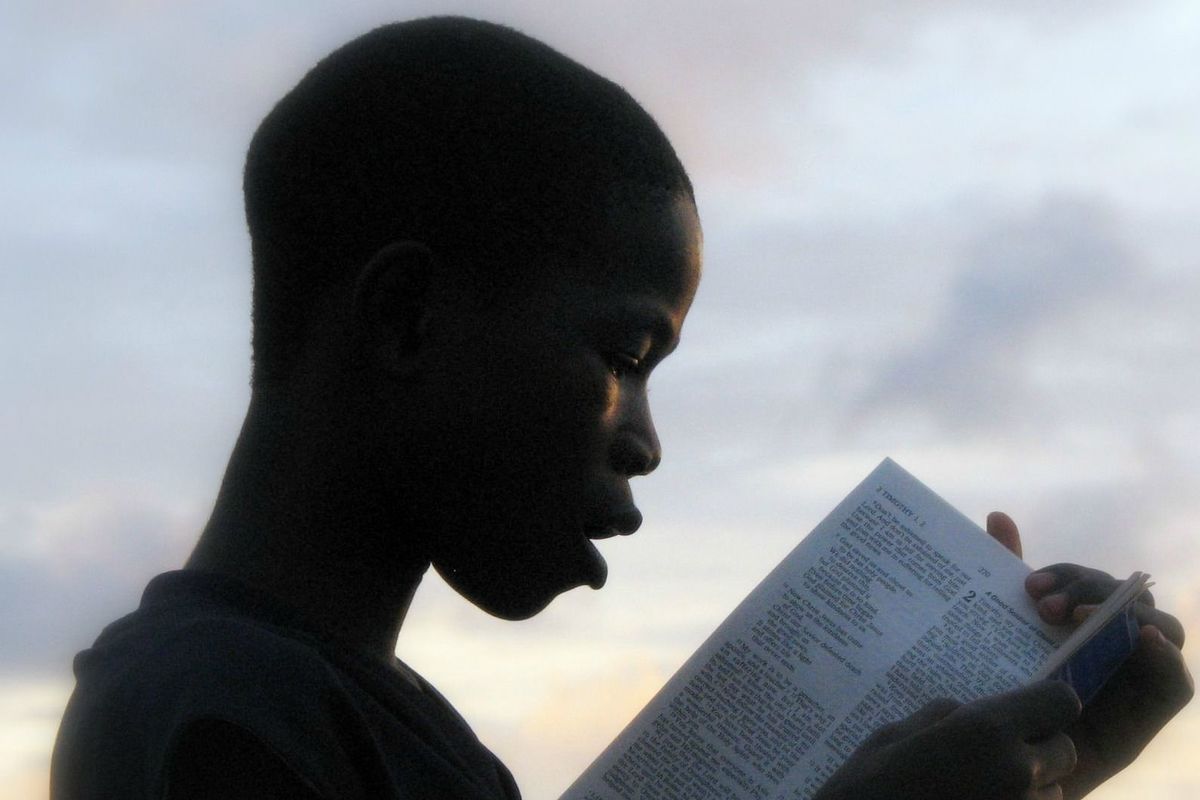 Are Africans, as Desmond Tutu once opined, “much more on the wavelength of the Bible than the Occidental ever was”?[1] Should one listen to African exegetes more closely since, as Philip Jenkins has argued, their experience of inhabiting the world of the Bible represents the vanguard of a growing shift of Christianity towards the global South?[2] These are questions worth pondering. I think there is abundant evidence—both theological and empirical—to suggest that the Bible plays a role among African Christians that is profound, communal, and suggestive of a new paradigm for ecclesial exegesis.

Let us take two examples from Scripture: the Exodus event and the Samaritan woman at the well in John 4. Mercy Amba Oduyuye, a Ghanian scholar born into a matrilineal Akana culture, offers scholarly insights on Exodus. She is a Methodist laywoman who studied in Cambridge, England, founded the Circle of Concerned African Women in 1989, and was awarded an honorary doctorate from Yale.[3] She sees deep commonalities between Africans and the experience of the Hebrew people: “The victory song led by Miriam (Ex 15) rings authentically and spontaneously—just what a group of Fante women would have done after a breathtaking deliverance.”[4] The effect of the African slave trade on the world does not go unnoticed: “Africans forcibly taken to the Americas and those left to labour at home for the same oppressors adopted the Christian faith and joined in the Hebrew affirmation that [YHWH] triumphs over chaos.”[5] The event of Exodus unfolds salvation history, for it speaks to all immigrants and subjugated peoples who maintain a steadfast belief in a Creator in the midst of social conflict and struggle.[6] Thus, Exodus is transformed into an African hymn of praise without depriving it of its Hebrew rhythms:

When oppressed peoples meet obstacles, the event of the exodus reassures them. Every triumph on the way evokes the Song of Miriam. Thus the journey to the promised land is a journey undertaken in the spirit of doxology. . . . The religious base of life in Africa enables us to read our history as ‘sacred’ history. Gye Nyame, ‘Except God,’ is one of the pillars of the primal religion of the Ghanaian, for without God nothing holds together.[7]

In general, Odoyuye draws upon an African aesthetic (“beads and strands”) to spawn an “engendered communal theology.”[8] The struggle for liberation is consciously refracted in the text, and the divine mysteries signified in the text play a normative role in the construction of personal and social identity.

The scene depicting the encounter of Jesus with the Samaritan woman is another favorite topic of African theologians. The encounter with the Samaritan woman shows that God meets not just the established and well-to-do people but those who have been cast aside by the dominant groups in society. Nigerian Teresa Okure has defended with great philological acumen the view that the foreign woman who appears in John 4 was a full agent of evangelization, an interpretation that continues to be attacked by many Johannine scholars.

[Jesus’] mind was not held captive by the story that made Jews and Samaritans at odds with one another. . . . Jesus knew a different story about who we are and what we are made for. He spoke to the Samaritan woman—as he speaks to each of us—about a God who loves us.[9]

Katongole’s Mother was Hutu, and his Father was Tutsi. He survived the genocide in Rwanda and thereby came to realize that reconciliation in the face of Christians being bloodied by fellow Christians required a radically new path into the ecclesial message of the text.[10] The encounter with the Samaritan is not about a kind deed accomplished by the Jewish preacher from Nazareth, and it is not just a cipher for a secular language of social liberation. In the Johannine story, Katongole argues, we see God’s unique power to offer healing in the midst of the violent conflicts that rend apart society and the Church. These African reflections are not innocent readings that yearn for a return to pre-modern norms for exegesis. The affinity between the African social imagination and the world of the Bible takes shape in light of what Paulinus Odozor terms the “God problem” in Africa.[11] The wounds of the colonial past hardly disappear when Africans are absorbed into the world of biblical realities. Africans take these wounds with them and emerge from the encounter as more critical and compelling witnesses to the wisdom of God.

Is the African method of reading the world into the text so radically different from that of the West? The differences are striking, but Pope Emeritus Benedict XVI did not see them as unbridgeable. He also did not adopt an apologia for African hermeneutics in order to use it as a cudgel against the dictatorship of relativism. In the post-synodal Apostolic Exhortation Africae Munus he included, for example, substantial reflections on the role of women in Africa. The language is both thoroughly biblical and uncharacteristically exhortatory:

You, Catholic women, carry on the Gospel tradition of those women who assisted Jesus and the apostles (cf. Lk 8:3). In the local Churches, you are a kind of “backbone,” because your numbers, your active presence and your organizations are a great support for the Church’s apostolate. When peace is under threat, when justice is flouted, when poverty increases, you stand up to defend human dignity, the family and the values of religion. May the Holy Spirit unceasingly call forth holy and courageous women in the Church, who can make their precious spiritual contribution to the growth of our communities! (Africae Munus, §58)


Benedict XVI then adds three biblical vignettes: Mary of Bethany at Jesus’ feet (Lk 10:39), the healing at the pool of Bethzatha (Jn 5:3–9), and Peter’s empowering speech upon curing a lame beggar (Acts 3:6). The Holy Father’s witness to the Gospel represents an intercultural exchange with the African Church. He also affirms that the African genius for interpreting Scripture, which is also its Via Crucis, translates into a universal message of biblical wisdom.

[4] Mercy Amba Odoyuye, Beads and Strands: Reflections of an African Woman on Christianity in Africa (Editions Clé: Yaoundé, Cameroun and Regnum Africa: Akropong-Akuapem. Ghana, 2002), 3. Fante is a subset of the Akan people that inhabit the southwestern coastal region of Ghana and the Ivory Coast.

[8] This characterization of the work of the Circle of Concerned Women in Africa comes from Kenyan Musimbi Kanyoro, as cited in Agnes Brazal, “Feminism in Africa and the World Church” in East Asian Pastoral Review, 51 (2014), 34. Brazal also notes, citing Teresia Hinga, that “there are not that many Catholic voices in the Circle” (ibid.). This article is meant to lend support to Catholic women like Brazal and Hinga that wish to nurture an ecclesial reading of Scripture that speaks to the oppression of women in the global South. That task carries with it a number of methodological challenges not addressed here. In any case, it is imperative, in my view, that this project of culling the Scriptures nonetheless be supported.

[9] Emanuel Katongole with Jonathan Wilson-Hartgrove, “The Pattern of this World” in Sojourners (January 2009), 36.

Peter Casarella is an associate professor of systematic theology, world religions, and world Church in the department of theology at the University of Notre Dame.