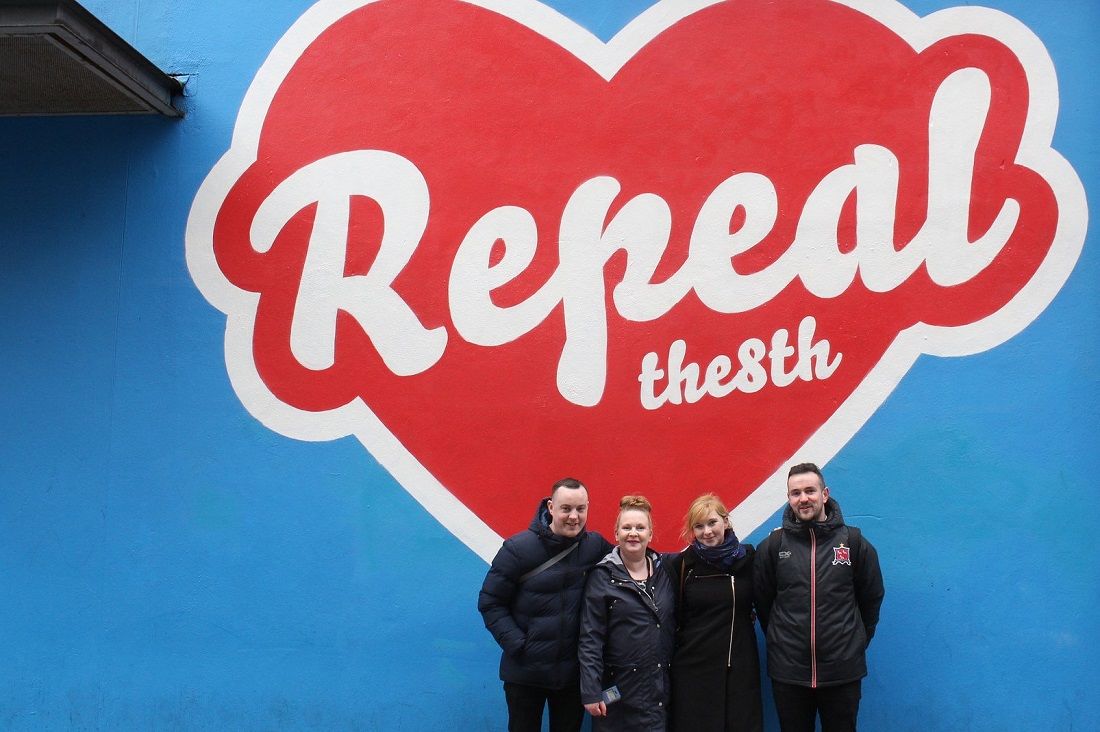 For many decades now, Ireland has been a shining beacon of non-violence—one which refuses to choose between the life and dignity of a mother and that of her prenatal child. Abortion had long been illegal in Ireland, but in 1983 the Irish (by a 67-33 referendum vote) adopted this 8th amendment to their constitution:


And they have made good on their promise to protect and love both mother and child. Indeed, Ireland has significantly better health outcomes for pregnant women than abortion-friendly England and the United States. Significantly, this is also true of Chile, one of a handful other countries to offer something close to full legal protection of the prenatal child.

Ostensibly in support of "health care" for women, however, pro-abortion rights forces around the world have been supporting a referendum to repeal the 8th Amendment. Under the language that would be adopted, prenatal children would be stripped of all legal protection under the Irish Constitution. Abortion would be legal on demand until 12 weeks, and legal for up until 6 months for unspecified health reasons (Abortion is already legal in Ireland to save the mother’s life).


As one might imagine, a developed country that fully respects women while banning most abortions presents a problem for abortion rights narratives around the world. Thus, it is hardly surprising to see, as a Cora Sherlock has emphasized, pro-choice money pouring into Ireland. It was revealed in 2016, for instance, that George Soros’s Open Society Foundation had given money to Irish groups the Abortion Rights Campaign, Amnesty Ireland, and the Irish Family Planning Association in their struggle to repeal the 8th.

Much like the United States and other developed countries around the world, the gatekeepers of public discourse in Ireland—especially the media and academics—have become overwhelmingly and stridently pro-choice in recent years. So it was no surprise, particularly after the tragic 2012 death of Savita Halappanavar during her pregnancy (a death which spurred the new referendum), that pro-lifers would have their work cut out for them.

Depending on which poll you looked at, just a few months ago about 63% of Irish said they were in favor of repealing the 8th Amendment. In early May, however, just three weeks before the vote, that number was down to 45%—with "No" at 34% and 17% "Undecided." This dramatic shift is the result of intense and skilled efforts by Irish pro-lifers, under ridiculously difficult conditions, to advocate for the equal dignity of both mother and child.

It is interesting to see the results of actual public debate, one in which facts and arguments are presented in ways that actually matter for policy, rather in ways that are largely designed to score political points. Pro-lifers, for instance, have been forced to reckon with the unintentional consequences of making abortion illegal, including the numbers of women who simply go to countries like England and Germany to have abortions.

Pro-choicers, on the other hand, have been forced to confront many more inconvenient truths.  Awkwardly, it was revealed the event which spurred the referendum itself—Savita’s terrible death—was the result of medical malpractice, not the 8th Amendment. Despite the rhetoric of women’s health, the proposed legislation does not focus only on removing a baby from her mother’s body, but also on making sure the baby is killed. And there are inconvenient parallels to UK abortion legislation which tried to legalize abortion only in limited circumstances, but was unable to do so given the loophole of an unspecified health exception.

Another reality pro-choicers have been forced to confront is that of the prenatal child herself. Pro-lifers have put up thousands of posters all over Ireland with the faces of the kinds of children currently protected by the 8th Amendment. This is an uncomfortable reality for repeal activists, many of whom understandably don’t wish to come face to face with the human beings from whom they are working to strip legal protection.

Many such activists have defended taking down pro-life posters by force. Indeed, there is now YouTube video of pro-life activists being physically assaulted as they try to put up signs in the first place. All this is quite embarrassing for the repeal movement as it becomes clear what their reaction is being faced with facts and arguments. Indeed, activists have set up something called "Repeal Shield" on Twitter which automatically blocks a large and growing list accounts making arguments in favor of the 8th Amendment.

Because abortion arguments which really matter for policy rarely happen in the developed West, very little compares with the Irish situation. Perhaps recent debates over euthanasia and assisted suicide, however, can shed some light. Especially in social justice-centered states, the more that facts and arguments came to light (and the less the debate is about emotional responses to specific, often-misunderstood cases) the better that laws against assisted suicide tended to fare.

Deeply liberal states like New York, Connecticut, Maryland, New Jersey, and Massachusetts have (after intense debate) all recently rejected assisted suicide. Strikingly, Massachusetts polls showed that in June of 2012 a whopping 68% supported legalizing the practice. After only five months of debate, however, their November 2012 referendum rejected assisted suicide 51 to 49%. There is an understandable and pre-critical impulse to support choice and autonomy, but especially when people think more deeply about how such choices affect vulnerable populations this impulse often gives way to a more considered point of view.

Is something like the Massachusetts shift happening in Ireland? We obviously don’t know for sure, but the arrows are pointing in the right direction.

St. Patrick’s arrival in Ireland was the beginning of the end for child sacrifice on the island. Indeed, there appears to have been a pre-Christian demon named Crom Cruach who demanded child sacrifice and who, at least according to legend, was defeated and banished by Patrick himself.

That began a 1,600 year era during which Ireland, though obviously not perfect, became a world leader in supporting the moral and legal status of children. That leadership remains intact to this day, particularly given the jewel that is their 8th Amendment. It remains a shining beacon of non-violence to the world.

As the struggle to protect this jewel enters its final days, everyone involved is in need of our prayers.