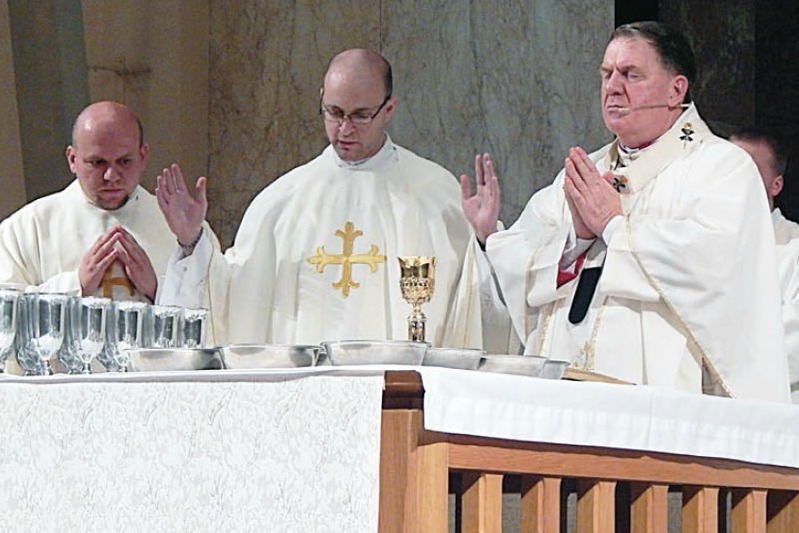 “Dude. The Lord’s Prayer is eschatological!”

“Eschatological. We’re literally praying for the end of time.”

This conversation between two very enthused millennial Catholics gives us a good starting point for talking about what saying the “Our Father” together at Mass means. The original sense of the prayer is one of future eschatology: it is a prayer for the last day, and we are praying for God’s kingdom to come through the sanctification of God’s name. The basic framework of the prayer consists of two “you” petitions and three “we” petitions. The two “you” petitions, “hallowed be thy name” and “thy kingdom come,” are about God’s cause, and they are addressed first before our own needs of food, forgiveness, and freedom from evil.

The first “you” petition is often interpreted as not taking God’s name in vain. However, the hallowing of the name is an important concept from the Old Testament, where the sanctification of the name of YHWH means honoring YHWH, instead of Israel profaning his name by their sinful lives and exile. In Semitic thought, the name is the person, especially for the divinity. In honoring YHWH, one shows the true holiness, transcendence, and divinity of YHWH by living according to his will in keeping the Torah.

While this petition does not refer to the human sanctification of the name of God, we find the idea of divine sanctification of the name in Ezekiel, where in his definitive, glorious eschatological act, YHWH will sanctify his name by bringing a sinful Israel back from exile and restoring the twelve scattered tribes, purifying them and making them holy. Here, it is the active idea of YHWH sanctifying his own name, revealing the holiness of his name for its own sake, by showing his total otherness, utter transcendence, and incomparability to all the pagan gods because he is not part of this created order. It is that eschatological act of YHWH decisively revealing himself in all of his power, glory, and transcendence by saving Israel from evil by which he hallows his name at the Eschaton.

Furthermore, the two “you” petitions go together: God sanctifies his name specifically by making his kingdom come. The petition, “your kingdom come,” indicates that the kingdom of God is not yet here in its fullness. Kingdom is also an odd subject for the verb “to come,” because that is not really how anyone would ordinarily think of or speak of a kingdom. This phrasing seems specific to the sayings of Jesus, and the locution seems to signify his emphasis on God’s coming in power as king to establish his rule. Additionally, when the early church prayed for something “to come,” they used the prayer, “Maranatha!” or “Come, Lord Jesus!” The prayer here is for the Lord Jesus to come in the Parousia. According to Origen, Jesus is the “kingdom in person,” and what seems to have happened in early Christianity is that Jesus eventually absorbed the symbolism of the kingdom of God, the core symbol of his preaching and ministry.

The petition about “daily bread” ultimately refers to our desire to be brought to the eschatological banquet on the last day. In Luke’s version of the Lord’s Prayer, however, he shifts the petitions from the future imperative, which indicates a single punctiliar event, the single act of the coming of the kingdom at the end of time, into the present imperative, which refers to an ongoing action, then adding the Greek phrase for “every day.” In this sense, Luke understands that the Parousia is not around the corner, so there needs to be more emphasis on the daily, day-in and day-out living of Christian life and our present needs in this world, whether that refers to physical bread or spiritual nourishment in the Eucharist.

The petition about not being led to the final test is about the fierce final struggle between good and evil, the final testing of the faithful by the powers of evil. The petition is for us not to be exposed to the fierce onslaught of the evil one to which we might succumb on the last day. While Luke has the simple “do not lead us to the test,” Matthew’s addition makes the petition clearer, “but snatch us away from the power of the evil one” in the final, eschatological clash between the powers of good and evil.

This eschatological orientation of the Lord’s Prayer reflects very much on the Eucharistic celebration. The liturgy recognizes and celebrates that “we are not there yet,” which challenges us to live God’s love as fully as we can in the present as we await the second coming of Christ. In the liturgy, the Eucharist is our “daily bread,” strengthening us to live the Christian life, and it is an eschatological reality, offering us a glimpse of what we shall experience fully in the kingdom and enabling us to “wait in joyful hope for the coming of our Savior, Jesus Christ.” As we pray “thy kingdom come,” we are invited to reflect on the goal of every Eucharist – final and complete union with God – while daily committing ourselves to doing the will of God “on earth as it is in heaven,” incorporating that eschatological hope into everything that we do. This “already-not yet” tension in the liturgy reminds us that we are not to be passive, complacent, and indifferent observers as we await the sanctification of God’s name over the power of evil; rather, we are called to act with justice, love tenderly, and walk humbly with our God each day, keeping before our eyes the paschal vision of self-giving love.

Grace Agolia (’17) is a junior Theology major and Catholic Social Tradition minor at the University of Notre Dame and an undergraduate fellow at the Notre Dame Center for Liturgy.