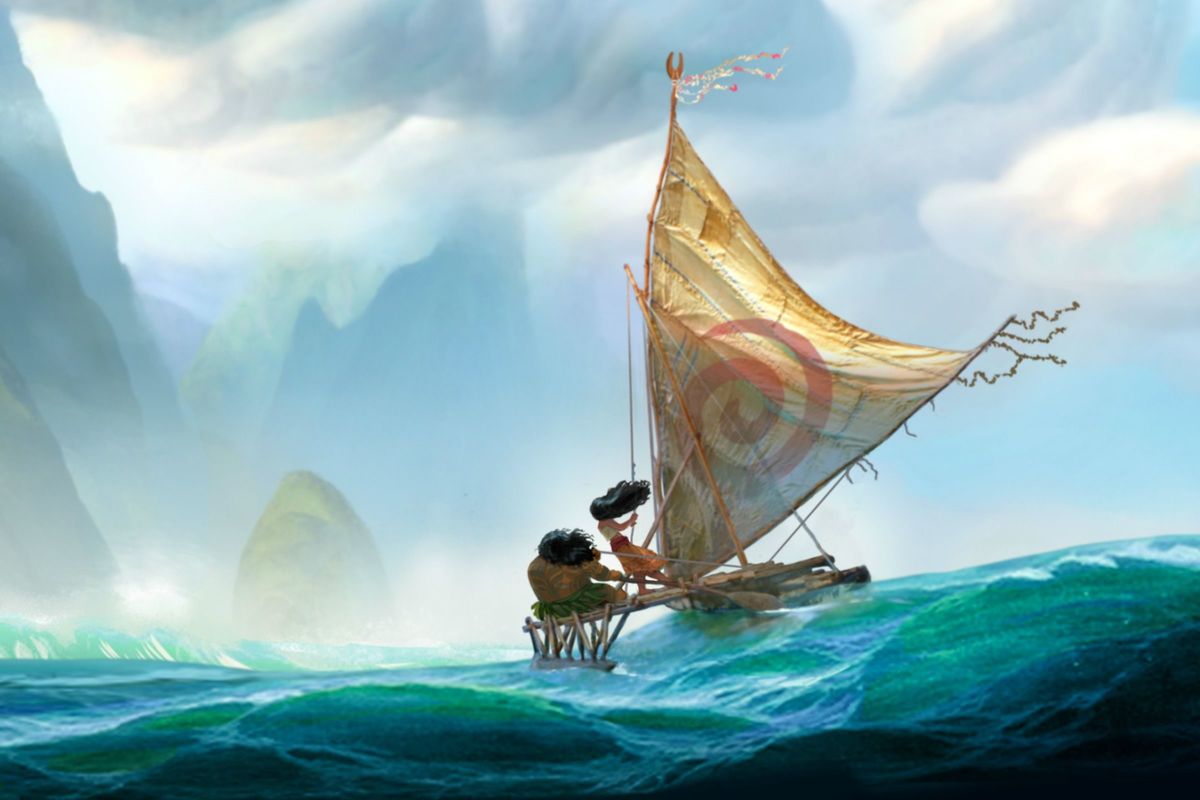 This past week saw the DVD release of the latest addition to the canon of Disney animated films: Moana. Not since The Lion King has a Disney film presented such rich thematic content: Moana is a beautiful depiction of the link between the discovery of one’s vocational identity and the pilgrimage that results from that discovery. Its imagery and language contain deep scriptural resonances that make it arguably the most theological Disney film to date.

From the opening moments of the film, the audience is invited to “put out into deep water,” if you will, as the narrator begins the story not with the traditional phrase “Once upon a time,” but with the words “In the beginning.” What unfolds is a creation narrative of sorts: the world is at harmony and all is well until the demigod Maui steals the heart of the island goddess Te Fiti, which holds within it the power to create. As a result, darkness enters the cosmos, gradually spreading a deadly blight throughout the lands and seas. Those with even a cursory familiarity with Scripture will immediately sense that we are on a different plane than a mere fairy tale; this is a retelling of the Genesis story: the beauty and perfection of paradisiacal world are forever damaged when a (quasi) human being grasps for what is not his.

Enter Moana. Born in the village of Motunui, Moana is daughter of the chief, Tui. As she acknowledges in “How Far I’ll Go,” a stunningly beautiful song of the ocean’s call and her own response, Moana has been drawn to the water from her earliest childhood. Yet, her father insists that she stay within the safe boundaries of the island, but her grandmother Tala (her father’s mother) quietly urges Moana to embrace the longing for the sea that lies at the core of her being. When the deadly blight finally reaches Motunui, Moana once again feels drawn to the ocean—she knows instinctively that the only way to defeat the darkness lies beyond the safety of the reef. Tala confirms this for her when she reveals to Moana that their ancestors were voyagers, and that the ocean has chosen Moana to restore harmony to the world by finding the demigod Maui and returning the heart of Te Fiti.

If the world this film’s characters inhabit calls to mind the creation and fall of Genesis, Moana’s call to action resonates with those of two great figures of the Old Testament. The LORD says to Abram: “Go from your country and your kindred and your father’s house to the land that I will show you” (Gen 12:1, NRSV). The LORD later says to Moses: “I will send you to Pharaoh to bring my people, the Israelites, out of Egypt” (Ex 3:10). Moreover, both Abram and Moses themselves prefigure Jesus of Nazareth, who, throughout the Gospels, refers again and again to the fact that he has been sent to do the will of his Father, and his testimony is in turn confirmed by the Father’s voice, identifying him as his “chosen Son” (Lk 9:35). The Son is chosen, the Son is sent.

Moana, too, is chosen and sent as a kind of Christ figure. Her decision to leave home recalls the words of the psalmist: “Hear, O daughter, consider and incline your ear; forget your people and your father’s house” (Ps 45:10). While Moana does indeed “forget her father’s house” by defying his order to stay on the island, her actions demonstrate not a forgetfulness of her people but a willingness to risk her life on behalf of her people. And so the young heroine embarks on what seems to be a fool’s errand: Moana must navigate the unforgiving ocean without ever having learned how to sail; she must confront the demigod Maui and persuade him to relinquish the treasure he risked everything to steal; she must face the lava demon Te Kā in order to return Te Fiti’s heart. Throughout her journey, Moana rests in the knowledge of her chosenness, trusting that she will somehow find the knowledge and wherewithal to complete her task, and when her confidence is shaken, it is her remembrance that she carries within her the strength of her ancestors and her people—from whom she has been chosen and for whom she has been sent—that reignites her courage.

Moana’s journey has within it elements of exitus and reditus as she lives into her vocational pilgrimage: she goes forth from her island, her kindred, and her father’s house and sails out beyond the reef toward “the line where the sky meets the sea,” not knowing how far she’ll have to go to save those whom she loves. She struggles and fails and tries again, and ultimately, she returns to her island, her kindred, and her father’s house having done what she was called to do. Not only that, but by virtue of her vocational journey, Moana also restores to her people their own vocational identity as voyagers.

Moana is a vivid reminder that to be chosen is to be sent. One cannot conceive of one’s own vocational identity; it must be received from God as gift. Further, one does not receive this gift of vocational identity for one’s own sake; it is taken up for the good of others, for the salvation of the world. As members of Christ’s Body, we set sail out onto the unknown ocean in the ark of the Church, not knowing how far we will be asked to journey, but knowing full well that we do not journey alone, that we carry within us the strength of our ancestors—our fathers and mothers in the faith—and that we do not journey for ourselves. Rather, we embrace our vocational identity and set sail on our life’s pilgrimage so that, through us, God might reveal to others all they are called to be.