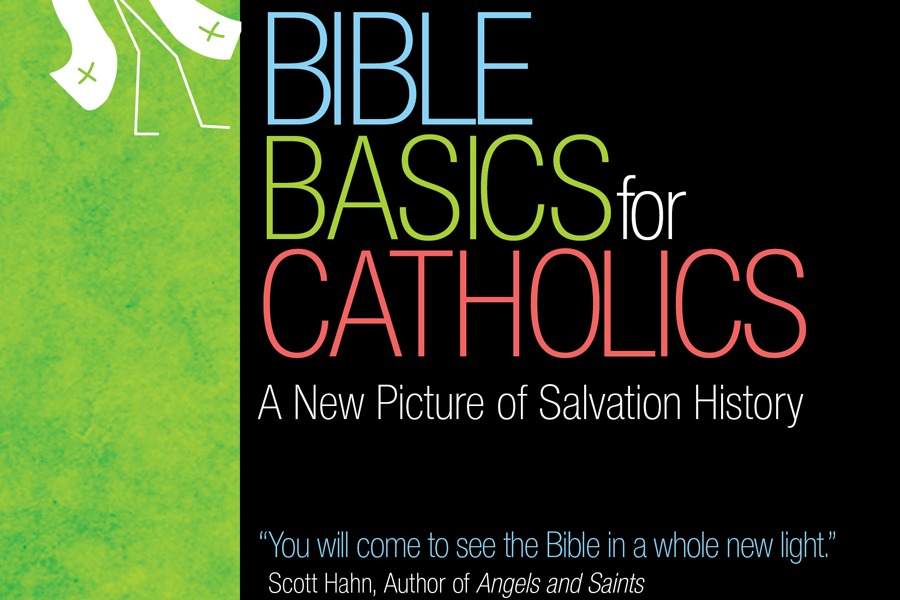 With a title like Bible Basics for Catholics: A New Picture of Salvation History, this is not the kind of book that broadcasts learned self-esteem at the coffee house. Better order that flat white to go. No, reading this book amounts to an admission of humility that, as Bergsma writes on the opening page, “You ought to know the Bible better than you do, and you probably feel vaguely guilty that you don’t” (1). The first meaning of the title as plea for help yields to its second, more significant sense: these are Bible basics for Catholics, and so Bergsma offers a distinctly Catholic introduction to salvation history.

Bergsma wants to provide for us the aerial view of Scripture, what it is “all about”—which he tells us he missed in his years of graduate study (2). The Church’s liturgy in particular has helped him see “the unity of the Bible through the concept of the covenant” (ibid.). Covenant, informed by biblical and ancient Near Eastern covenants, is “a legal way to make someone a part of your family” (4). The concept thus structures the seven chapters, focusing on Adam, Noah, Abraham, Moses, David, the prophetic promise of the new covenant, and the “Eucharistic Covenant,” respectively. Employing this clarity of purpose, Bergsma apportions Scripture out in a form digestible to the novice reader of Scripture of nearly any age, but in a way so as to stimulate stronger appetites.

A principle aim for Bergsma is to show the resemblance of the covenants to one another and the way in which the Eucharistic Covenant recapitulates and fulfills its predecessors. One might not immediately think of Adam in terms of covenant, but Bergsma uses chapter one to highlight certain special features of the creation story in Genesis 1 and Adam’s appointment as keeper of the garden in Genesis 2 that tie it to the other covenants: the form of creation itself as a temple built in seven stages (like the wilderness Tabernacle in the Sinaitic covenant) (19); Adam’s filial relationship to God, reflected in Israel, David’s, and Jesus’ filial relation to God (ibid.); the priestly coloring of the charge to till and keep the alpine garden (20–21, 29–31); and the dominion of Adam over creation (21–22).

The point is to present the Eucharistic Covenant as both the source and summit of the earlier covenants—to show how our covenant mediator, Jesus, grounds and subsumes them in a new and everlasting covenant. The nature of Jesus’ bond with the Old Testament covenants helps us understand Gospel elements such as: the virgin birth, since Jesus is God’s beloved Son, like Israel; the detail about Jesus’ seamless garment, tying Jesus to the priesthood (126–29); and the blood and water, realizing Ezekiel’s life-giving river from under the Temple, now Jesus’ body (144). Indeed, the Last Supper through the Crucifixion is “one worship ceremony, one liturgical act,” which recalls in various ways the moments of salvation history (141). Since the covenants are gathered in Jesus, when we commune with Christ sacramentally, we do so in a way that participates in each covenant: in Baptism we encounter the waters of Creation and the crossing of the Red Sea; in the Eucharist we celebrate Israel’s Passover Exodus (154–55). Bergsma’s sense is that, barring the ability to grasp the whole arc of salvation history, the Mass can become illegible.

What is distinctly Catholic here is of course, in part, this Eucharistic reading of the new covenant. Beyond that there is the kind of reading which Bergsma opens up to the new reader of the Bible: by emphasizing the typology of covenant, he highlights what we might call the literary quality of salvation history—not merely as a skillful, human literary fabrication but as a divinely inspired composition. To read Adam as the son of God and a priest is to deemphasize a hard and fast historicity of the primordial man in favor of what that man means, à la such works as Joseph Ratzinger’s ‘In the Beginning. . .’. Perhaps the most tenuous aspect of Bergsma’s explanation of the Adamic covenant is his reading of Genesis 1–2 together in defining his Adamic covenant—tenuous because most scholarship assigns these chapters to originally independent sources (i.e., the Priestly and Yahwist sources, respectively). Bergsma is wise not to enter here into the debates, and in any case the distinct sources have undergone a “recontextualization” in the formation of the canon, as Jon Levenson notes. (See The Hebrew Bible, the Old Testament, and Historical Criticism: Jews and Christians in Biblical Studies [Louisville, KY: Westminster, 1993], 123). The reading Bergsma offers thus stands in the scholarly tradition of the canonical approach, accepting the historical plausibility of reading Scripture in the light of itself as a self-contained entity.

Along the way Bergsma takes brief pauses to contextualize, for example, rituals new readers would find obscure (see, e.g., 49). There is also a brief but clear presentation of the meaning of covenant animal sacrifice and its effectiveness to purify sin (see 58–59). Bergsma follows ancient Jewish tradition that it was Isaac’s obedience that rendered later animal sacrifice effective for Israel as a “re-presentation” (58–59, emphasis original). That notion in turn teaches us about the relation of Christ’s offering for sin to those offerings of the Old Testament. Such a clear presentation could go a long way in making even the seasoned parishioner more comfortable in the language of the Mass, acclimating her to the world of the Bible. The author also takes several other side-roads, for instance into New Testament interpretation of the law as “penitential” (i.e. given on account of Israel’s sin) (77–78) and into the importance of the Temple as a “standing reminder of the covenants with Adam, Noah, Abraham, Moses, and David,” which “summed up all of salvation history and represented all God’s relationships with his people” (106).

The reasons for modern Catholic biblical illiteracy may perhaps begin with a reaction to the Reformation, as some have claimed. Excuses for avoiding personal study of Scripture are buttressed by a foreboding sense that—as scholars such as Jon Levenson have pointed out—the Bible is for specialists able to dissect its parts and trace them back to their original, fragmented contexts (cf. Hebrew Bible, xiv). There is also the often haphazard way the Old Testament in particular receives homiletical treatment. It’s a sore consolation that biblical literacy is down among Evangelicals as well, though this suggests that the problem is embedded deeper in culture than in any particular historical cause.

Bergsma’s streamline tour of Scripture is an invitation out of this mess—an invitation populated by his delightful and functional stick-figure drawings in every chapter. I’ve even passed it along to a bright friend who self-admittedly knew the Bible poorly and nevertheless came away with a coherent narrative of Scripture. This compact, 177-page volume is a fine option for the religious education director or campus minister looking for an introductory text. Each chapter comes with suggested biblical readings and there are endnotes that provide secondary references and further recommended introductory readings. Indeed, the writing level is appropriate for most teenagers, but that shouldn’t betray the acumen of this compelling reading. Bergsma presents Scripture in such a way as to still our undue intimidation before the living and active Word of God.

Andrew Geist is a Ph.D. candidate in Old Testament at the University of Notre Dame.