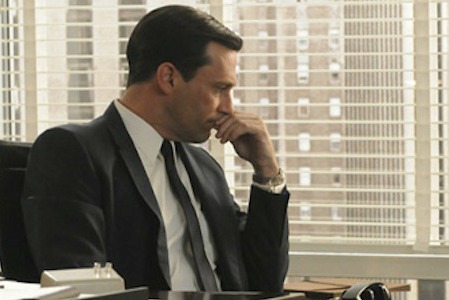 The opening sequence shows a cartoon man in free fall. Where is he falling to? A past article from The Onion reveals the destination. The headline announces that for the first time since its original construction, Hell is being expanded with a brand new tenth circle, to be called “Corpus Adverticus. ” It is reserved, The Onion reports, for lobbyists, publicists, advertising executives, and “Total Bastards.” In Dante’s Inferno, the eighth and ninth circles are reserved for those guilty of fraud, and, as The Onion analyzes it, the new tenth circle is simply an addition to their original accommodations. And yet The Onion didn’t really have to bother, since the eighth circle of the Inferno already contains a “pouch” where the fraudulent—those who change Yes to No and No to Yes for money—are immersed in boiling pitch. The punishments in Dante are always an image of the sin being punished, so we see that once truth becomes a function of money, everything is submerged in a sticky, absolute darkness of nihilism.

In the pilot episode of the AMC series Mad Men, we see the life of someone whose job is to convey information which deliberately distorts the truth in order to make money. We see him discard the research on the negative effects of smoking, knowing it contains the truth. Ironically, he is smoking all the while. He thus exhibits the “death wish” alleged by the research professor who brought him the results of her work, though, like the sinners in Dante’s Inferno, he doesn’t appreciates the irony in his own situation. In Don Draper’s case, the death wish is symbolized in the physical act of smoking while throwing away the truth about what smoking is doing to him. But this is only the “literal” level: this act stands for and so depicts a much more serious sin, namely, his commitment to a horrifying nihilism, in which life and death themselves are scorned as intrinsically meaningless, simply filled with whatever meaning the Ad Men give them. In this world, there is no stable meaning left.

This episode invites us to see that Draper’s sense of himself as a man is very much tied in with this death wish, or commitment to the free fall of nihilism, since it is completely invested in his power to invent himself from wholecloth, and create the reality around him by improvising (if need be at the last minute); by asserting the terms of the discussion; by making himself the measure of the meaning of the cosmos through his own ideas, his own style, his own confidence; by persuading others of his way of seeing things. The setting of the show as a retrospect into a time when women were not integrated into the workplace as leaders but mostly as second class sex objects, is used to accentuate the nihilistic tendencies of Draper’s version of masculinity, since it also defines what the“ women” in the world around him mean and what they are for. It is at the end of the episode that we realize that this man is indeed in the free fall of a death wish, wholly given over to a nihilism of his own creation, since even his family is not the function of any objective moral order, but his morality is simply another ad hoc invention of himself.

And yet Draper is charming, as his female CEO and would-be client confesses. Margaret Hamilton, who played the Wicked Witch of the West in The Wizard of Oz, was once interviewed by Mr. Rogers about her most famous role. She said that there can be no character in a successful movie that is wholly evil, since the audience will not be able to create any connection to that character. For the Wicked Witch, she said, it’s two things that make her likeable in some way, namely: she loves what she does, and she’s very good at it. Draper, too, has qualities that make him likeable, qualities that many people admire in men and that men would like to possess: his angular good looks—including his twenty-first century body retrofitted for the 1960s, his confidence in himself and in his ability to persuade others of his way of looking at things, his coolness in a crisis, and his willingness to take risks and to improvise. He is smooth. He loves what he does, and he’s very good at it!

So, if we feel his charm as a man, is it because we too have a death wish? Because we too, if we are men, are would-be nihilists and misogynists, only we’re not man enough to carry it off as fully as he does, so we let him do it for us through the fantasy of this show? But the show reveals the nihilism in his version of masculinity quite visibly. Perhaps, then, we believe that his charm can be re-invented in a world where masculinity has not lost the attractive features found in Draper, but has been integrated into a different vision of the world, where God and not man sets the terms, provides for meaning in the cosmos, and is in fact the Creator. If we reverse the free fall of the man in the cartoon, and follow him upwards instead, we could take a hint from Dante’s Paradiso, where everyone is what they are because their being is rooted and fixed in the self-giving love called “charity.” This love never does away with the natural, but perfects it, and in fact, reveals it for what it truly is. The man whose being is fixed in this charity discovers, perhaps for the first time, what his own manliness actually is. I think those of us who might, in spite of ourselves, catch ourselves admiring Draper’s charms might be wishing they could see them in someone whose life was filled with charity and self-giving, instead of the nihilistic desire to create oneself from wholecloth, which Dante (following Augustine) calls “pride.” What would it look like, for example, if Draper used that cool and smooth style to apologize to his wife for his infidelities and beg her forgiveness? If he used his confidence in his ability to persuade to convince young people to quit smoking and to resist the false claims of the ad men? If he adopted his junior colleague and helped him advance? Would he lose any of his manliness? Or would his manliness, as I’m suggesting, be revealed more fully to himself and to those around him as an exercise, not of pride, but of humility? He would then have the self-perspective necessary to break the cycle of irony, and to avoid falling into the newly created Hell—actually created by himself and not by The Onion—reserved for advertising executives, publicists, and “Total Bastards.”