Faced with an increasingly dechristianized West in his own time, the famous German Jesuit theologian, Karl Rahner, frequently warned against a “missionary defeatism” in the Church.[1] Today, at least in the United States, political polarization has undermined any common arena of discourse that may have once existed. Loud rhetoric (not even eloquent sophistry!) has replaced reasoned argument. Washington remains gridlocked, if not perpetually, meaning that even common-sense, compromise legislation cannot be approved. Any new sense of global solidarity brought on by an age of social media is shadowed by a reminder of just how challenging a real, embodied solidarity actually is. At the same time, findings in the social sciences have bordered on determinism, showing more and more just how formative systems—like the one described—are for the human person, calling into question human responsibility and agency to actually transcend, let alone shape, these societies and cultures.

The chorus of a 1971 hit by the English band Ten Years After captures the sentiment of many: “I’d love to change the world, but I don’t know what to do.” Many have resigned themselves to their respective political fates, feeling helplessly small in the face of such complex and apparently irredeemable situations. For many others, this resignation has morphed into an exhausted indifference and pessimism, tinged with resentment and shorn of any political creativity. The confluence of all these factors can even call into question the viability of the Church’s mission, the community called precisely to exercise Jesus’ redemptive agency in societies and cultures. As a result, almost understandably, to theologically adapt a phrase, many Christians “live lives of quiet missionary defeatism.”

The confident missionary joy and energy lived and called for by Pope Francis is all the more striking when juxtaposed with this ever-tempting defeatism. “Challenges exist to be overcome! Let us be realists, but without losing our joy, our boldness and our hope-filled commitment. Let us not allow ourselves to be robbed of missionary vigor!” reads the shortest section of Francis’ Evangelii Gaudium, which offered one of the earliest and most vivid glimpses of the Pope’s ecclesial vision (EG §109).

Besides this staunchly missionary spirituality of joy and hope, Francis’ ability to speak to the personal lives of so many Christians has been another hallmark of his pontificate. Some have called it the product of a pastor’s pen. Few remain unchallenged after reading Evangelii Gaudium and hearing Francis’ clarion calls to personally take up the missionary vocation. The vivid and penetrating attention paid by Francis to the joys and challenges of everyday family life makes his most recent apostolic exhortation, Amoris Laetitia, unique. Perhaps, however, this call to personal conversion is strongest in Francis’ encyclical on ecology, Laudato Si’.

Here, Pope Francis reminds Christians that ecological conversion entails specific ways of acting in daily life. He alludes to St. Thérèse of Lisieux’s “little way of love,” in this case how “simple daily gestures” can resist the culture of consumption, greed, and waste that buoys environmental degradation (LS §230). Some of these “little ways” include: reconsidering reliance on air-conditioning (LS §51), using less heating, wearing warmer clothes, “avoiding the use of plastic and paper, reducing water consumption, separating refuse, cooking only what can reasonably be consumed, showing care for other living beings, using public transport or car-pooling, planting trees, turning off unnecessary lights” (LS §211), and even saying grace before and after meals (LS §227). In a similar vein, Francis calls families to be schools that teach how to love and respect all life, how to live lives of order and cleanliness, how to ask without demanding, how to practice gratitude, how to control aggression and greed, and how to seek forgiveness (LS §213). The Church’s mission, which includes reversing ecological decline, necessarily includes these seemingly minor, if not insignificant, actions.

After all, these daily gestures can seem like tilting at the formidable windmills of entire politics and economies governed by the “dominant technocratic paradigm,” one which sees the world through the flattening lens of ravishing mastery, indifferent efficiency, and objectifying utility (LS §§106–114, 189–191). The accompanying individualistic “modern anthropocentrism” and “practical relativism” likewise tempt Christians to passively resign themselves to their respective ecological fates given this complexity (LS §§115–123). Missionary defeatism beckons yet again.

Nevertheless, Pope Francis resists this ecclesial temptation. Immediately after listing some of the small ecological gestures mentioned above, he adds:

We must not think that these efforts are not going to change the world. They benefit society, often unbeknown to us, for they call forth a goodness which, albeit unseen, inevitably tends to spread. (LS §212)


Francis’ radiant missionary confidence in the face of the largeness of the ecological crisis, though striking, is hardly surprising. This joyful, if not incredible, embrace of the missionary vocation in Laudato Si’ begs deeper theological exploration.

In his impactful work Method in Theology, the Canadian Jesuit theologian Bernard Lonergan outlined a “scale of values,” an ordered heuristic designed to both differentiate various levels of human living and to consider how these levels interact with each other.[2] Vital values deal with life’s necessities, like food, shelter, and health. Social values concern communal order, namely, how to distribute political and economic power among various groups. Cultural values are found in worldviews, the taken-for-granted assumptions of a community about reality, worth, and ends. Personal values are the concrete values lived out by the individual in his or her own daily life. Finally, religious values are located on the level of grace, “God’s love poured onto our hearts” (Rom 5:5).

Lonergan spoke elsewhere of two processes in human history: one that creates and one that heals.[3] The first—human creativity—works up the scale starting from vital values. To secure vital values for survival, economies and politics emerge. That is, certain social values develop. Cultural values eventually develop to sustain the social values that dictate distributions of power. These cultural worldviews can only survive as long as they are appropriated on the level of personal values. The end result is progress and human flourishing. Nevertheless, as history shows, egoism mires and distorts the best intentions of human ingenuity—becoming instantiated in personal habits, economics and politics, and worldviews—all named in various forms of personal and structural sin.[4] Indeed, the complexity of the ecological crisis that Laudato Si’ portrays provides a perfect case-in-point.

Nevertheless, Lonergan names a second process present in history—one of grace, healing, and redemption—that works down this scale beginning from religious values. The conversion brought on by these religious values evokes a change in an individual’s personal values incarnated in everyday life. Pope Francis’ “little ways” of ecological conversion—wearing warmer clothes, saying grace before meals, etc.—immediately come to mind. Most importantly, the logic of this healing process suggests that these personal values and daily gestures actually can and do redemptively impact distorted cultural and social values—in Laudato Si’s case, the dominant technocratic paradigm along with the entire economies and politics it regularly governs and blinds.

Lonergan’s work thus helps name the missionary confidence Pope Francis exhibits in Laudato Si’. “We must not think that these efforts are not going to change the world” is a faith claim. Viewed through the lens of faith and grace, daily gestures of conversion can and do change the world, as unbelievable as it may sound. Indeed, absent this lens and confronted with the apparent largeness of sin’s imbroglio, one is left only with political fatalism and missionary defeatism. Nevertheless, Francis’ conviction remains a challenging one, for mission decisively involves the entirety of one’s living and its ongoing conversion. To think or act otherwise can only betray the baptismal vocation incumbent on each Christian which Vatican II retrieved so emphatically.[5] One who continually follows this call to holiness in the everyday can remain joyfully confident of its broader redemptive impact in the world. After all, it was the death of one man on a cross and his rising that irrevocably saved humanity, the world, and the entire cosmos.

Featured Photo: Two men volunteer their time to clean up waste during the 2015 papal visit to the Philippines. Photo: Jojo Nicdao; CC-BY-2.0. 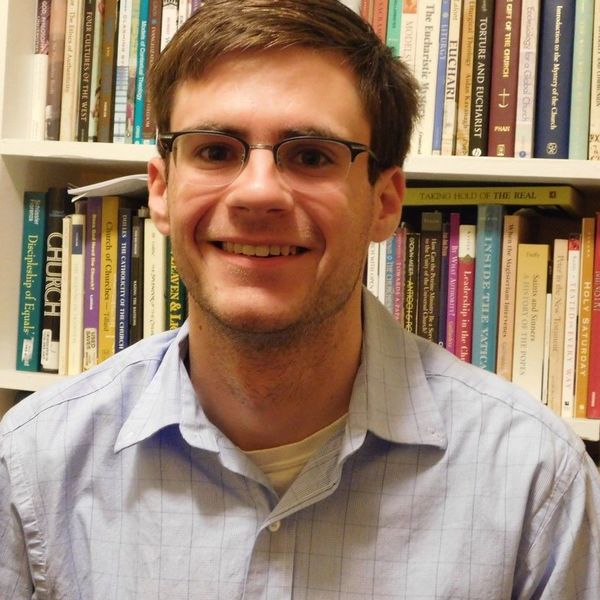 Lucas Briola is an assistant professor of theology at Saint Vincent College (Latrobe, PA). He has edited a collection of essays, "Everything Is Interconnected": Towards a Globalization with a Human Face and an Integral Ecology, which is forthcoming from Marquette University Press.