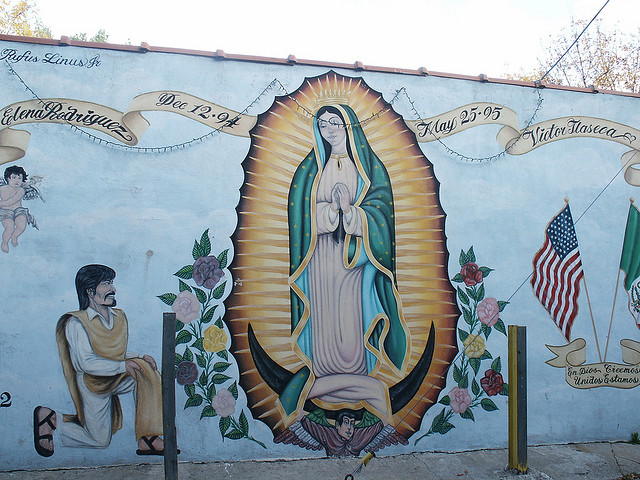 In light of the recent trip of Pope Francis to Mexico and his visit to the Basilica of Guadalupe, the person of St. Juan Diego provokes an invitation to consider his virtues and those of other Latinos who have imitated his “practical Christianity.”[2] We know from the Nican Mopohua that the intensity of his conversion to the message of Our Lady of Guadalupe was matched only by his ardent desire to heal his uncle Juan Bernardino, who was lying on his deathbed.[3] In the homily at the canonization, Pope St. John Paul II extolled the new saint’s humility and noted that his witness of faith became “the catalyst for a new Mexican identity” and “facilitated the meeting of two worlds.”[4] The Pope then implored Juan Diego from heaven to “bless families, strengthen spouses in their marriage, [and] sustain the efforts of parents to give their children a Christian upbringing.”[5] St. Juan Diego can thus help Latino families in the New Evangelization to explore with new vigor the challenge of passing on the faith.

Virgil Elizondo underscores both the historical veracity of the saint and the need for the faithful to move beyond a sanitized image:

We know that by 1531 Juan Diego was certainly a widower. He definitely belonged to the ancianos (venerated elderly) of his people. . . . His native name Cuauhtlatoazin (“one who speaks like an eagle”) means that he spoke with great authority. We know he was from Cuauhtitlan, the people who served as guardians of the ancient wisdom. . . . Although his neighbors probably saw Juan Diego as a “wise man,” he was almost certainly considered inferior and backward by the invading Europeans, who regarded the ancient wisdom as diabolic rubbish.[6]

What kind of wise man was Juan Diego and why was he considered rubbish by the Europeans? The oral traditions report that he lived at Tepeyac in a little house adjacent to the dwelling place of the image painted on his tilma.[7] What we know about the adobe structure from the 1530s is based upon the oral traditions of the indigenous (and therefore suspicious in the eyes of historians accustomed to drawing conclusions based solely on the existence of contemporaneous manuscripts).[8] His humble abode was nothing like the enormous Basilica that you encounter today.[9] Moreover, the construction solely by the indigenous was also probably not as elaborate as the adobe church constructed in 1556 or “the old church” that began construction in 1695 and opened its doors in 1709.[10] In any case, Juan Diego is said to have lived in this place until 1548, and the ermita or dwelling place of the image may have also been a home for the indigenous during that generation.[11]

According to the oral tradition, Juan Diego confessed, did penance, put on a sackcloth (cf. Ez 7:18), and partook of the Eucharist with regularity.[12] He was also diligent in sweeping and incensing the ermita.[13] The latter detail opens up another way to grasp his sanctity.[14] For the Nahuas, “immorality is identified with dirt or filth.”[15] Tlazolli refers to pollution. It can refer to a sexual transgression or to the out of place filth that one sweeps up with a broom.[16] Juan Diego himself speaks to the Virgin of his abased lot “as the excrement of the people; I am a leaf.”[17] Dirt and the rituals to remove it are also associated with the liminality of death.[18] Sweeping of Aztec temples was probably regarded by the friars as witchcraft. It was thought to promote upright behavior, engender female fertility, and ward off evil spirits. The initial skepticism of the friars did not prevent preachers from adapting the metaphor to the interior demands of Christian penance: “Every day I urge [the people] that they sweep things; that they examine themselves, that they arise at dawn, that they do penance, that they prepare for death.”[19] Partaking of the sacraments and keeping the floors clean are thus not that far apart in Juan Diego’s mestizo spirituality.

Because of his solitary guardianship of the sacred image of the Blessed Virgin, one might evoke parallels between Juan Diego and monastic life at Mount Athos or Mount Carmel.[20] But there is an even more intriguing parallel between the broomstick-wielding Nahua Christians and the male Penitentes of New Mexico. Alberto Pulido speaks instead of the “sacred triad of charity, prayer, and the good example.” “Prayer” is an all-encompassing form of agency in Penitente spirituality that includes acts of charity and the building of moradas (simple, adobe dwelling places).[21] They maintain the unity of performing discrete religious practices and blessing “the geographical and physical space where sacred encounters or practices occur.”[22]

These two examples of Hispanic spirituality do not stand apart from the institutional Church.[23] There is, for example, a basic Christian rhythm expressed in each that connects terra firma to God’s unfathomable Beauty through the active transmission of stories about the God of Jesus Christ. Speaking just for myself, living within this rhythm of cosmic and ecclesial mediation is what gets me up in the morning to be a father, catechist, and theologian.

[1] Virgilio Elizondo and Timothy Matovina assisted me in the redaction of this essay, but I take full responsibility for its errors.

[8] On the historical valence of the oral traditions, see Francisco Javier Noguez Ramirez, The Apparition and Early Cult of the Virgin of Guadalupe in Tepeyac, Mexico City: A Study of the Native and Spanish Sources Written in the Sixteenth and Seventeenth Century. Ph.D. diss., Tulane University, 1985, 196–205.

[11] Timothy Matovina, “The Origins of the Guadalupe Tradition,” 250–1, 255–56, 267, and 290. Matovina claims, pace Stafford Poole, that “both Spaniards and natives participated in [the devotion] from its early stages” (288). Both sides of the historical debate agree on the paucity of written sources and recognize it as a challenge.

[14] I thank Michael Anthony Abril for helping me with this reference.

[19] This passage is taken from a dramatic allegory for confession named Tlachpanaliztli (“Sweeping”), as translated in Burkhart, The Slippery Earth, 122. For the original text, see Fernando Horcasitas, Teatro náhuatl: Epocas novohispana y moderna (Mexico: Universidad Nacional Autonóma de México, 1974), 578. For the notion of penance as self-offering rather than self-abnegation among Nahua Christians, see El Encuentro, 492.

[20] Matthew Milliner, an expert on Byzantine Marian iconography, wrote an article about visiting an Orthodox monastery in the Southwest that reminded him the veneration of the icon of the Virgin at Mount Athos. In it he refers to Juan Diego, who brought a Western icon of the Virgin to the people of God, as “the Mexican Moses.” See “The Desert Fathers: Finding a Greek Orthodox Monastery against a Stark Arizona Backdrop,” First Things (August 2010), http://www.firstthings.com/article/2010/08/the-desert-fathers (accessed 1 July 2015). He concludes: “Although Our Lady of Guadalupe and the Virgin of Arizona are profoundly different, there is, of course, but one Mary to whom they both refer.” I am grateful to Michael Altenburger for bringing Mount Carmel to my attention.

Peter Casarella is Professor of Theology at Duke University.