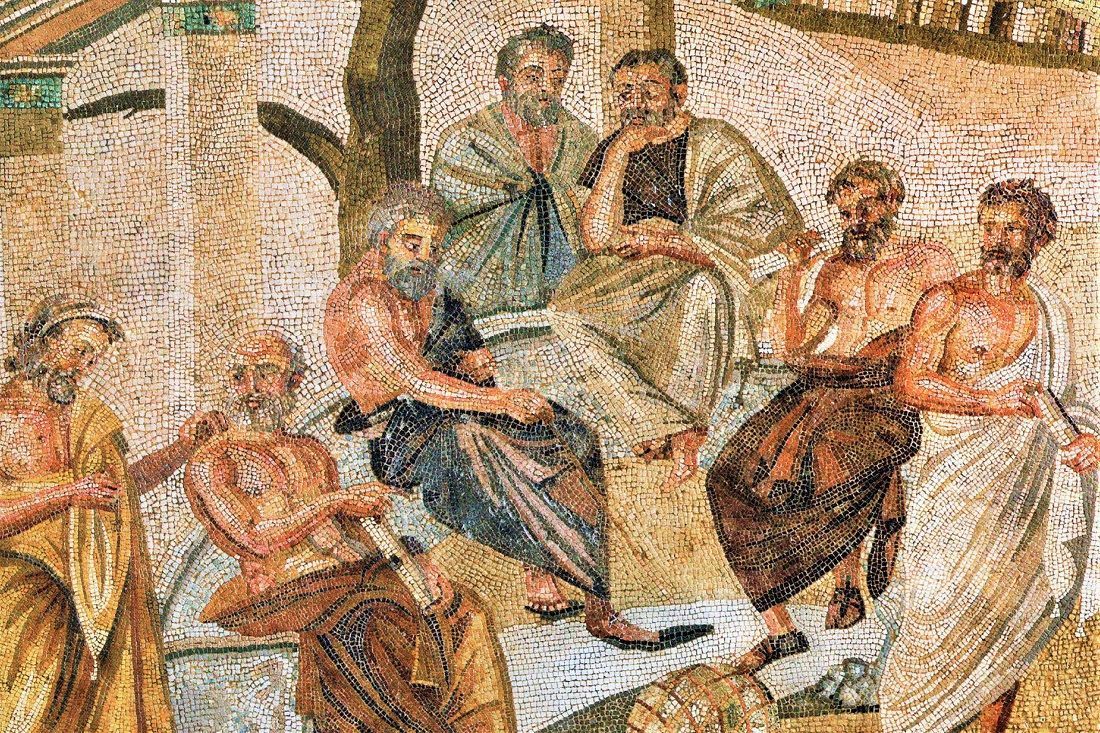 The sacramental theology of Joseph Ratzinger is categorized by the Belgian systematic theologian Lieven Boeve as a pre-modern “neo-Platonic Augustinian vision of the world.”[1] According to Boeve, Ratzinger remains dependent on a metaphysics characterized by a distinction between the visible and the invisible. In Boeve’s narrative, Ratzinger is uncritically attached to an eternal grounding that is outside of the rite itself, a transcendence that brackets materiality and the particularity of existence in the world. The way forward in sacramental theology for Boeve is a postmodern dialectic of interruption between transcendence and immanence: “The sacramentality of life, clarified and celebrated in the sacraments, is no longer considered as participation in a divine being . . . but as being involved in the tension arising from the irruption of the divine Other into our human narratives, to which the Christian narrative testifies from of old.”[2] The sacramental structure of Christian existence is not entrance into some eternal world outside of time but an interruption of divine Otherness into the present.

For Boeve, as he argues elsewhere, this postmodern sacramental theology is necessary if Christians are to avoid the hegemony of “self-assuring human constructions.”[3] Sacraments do not secure our identity as Christians but constantly interrupt the Christian, demanding that he or she restructure their narrative identities anew.[4] Christians must eschew closed narratives, taking up a hermeneutic in which one assumes a posture of contemplative openness toward all other stories. Other stories, even non-Christian ones, interrupt the Christian—requiring the Christian to re-narrate identity anew. For Boeve, Christian particularity is still essential—he eschews a certain modern theological method that translates Christian particularity into universals. But, postmodern critical consciousness “warns us not to be too quick to include or exclude the truth of the other, but rather to reflect on our own truth claim in relationship to the truth claims of others.”[5]

Thus, for Boeve, the sacraments are not entrance into an eternal world of meaning. Instead, the “grace-filled’ dimension of the sacraments is a cancelling out of Christian hegemony. The Christian is never entirely secure in his or her identity, “escaping” into the transcendent love of the triune God as mediated through efficacious signs. Sacramental celebrations in a postmodern age are the privileged pedagogy of theological interruption.

Boeve’s account of interruption is an important one, particularly in remaining wary of a certain understanding of sacramental identity as ideology. It is often the case among liturgical theologians in particular that too much is claimed relative to the power of liturgy to form Christian identity. The early liturgical movement often described how liturgy could provide a healing balm for individualism, racism, globalization, and secularization to name but a few of the social malaises thought curable by the liturgy. The Christian tradition is full of moments in which liturgical prayer is malformative of the desires of Christians, as James K.A. Smith has recent argued in his Awaiting the King:

The Church has often used, perhaps unconsciously, the liturgy as a way of upholding ideologies as pernicious as racism.[7] The Church’s act of worship, insofar as it unfolds in time and space, always risks being influenced by “worldly” programs of power.

But, does Ratzinger succumb to an understanding of sacramental worship as an escape into an eternal realm, one that marginalizes historical contingency and thus the Church’s need for constant conversion away from “worldliness”? Is Ratzinger guilty of the charge leveled by Boeve?

A closer attention to Ratzinger’s liturgical-sacramental theology suggests that no he does not. In the essay “The Sacramental Foundation of Christian Existence” from Theology of the Liturgy, Ratzinger begins with a question: Can the human person still employ a sacramental economy in a world emptied of symbolism? The symbolic approach presumed that human existence was not reducible to the material. Eating a meal, for example, was not simply the taking in of nutrients but linked to a broader world of meaning—of communion, of fellowship with other human beings. In a materialist age, one may question the wisdom of this symbolic metaphysics in which matter is sufficient unto itself. The contemporary world, for Ratzinger, “sees things merely as things, as a function of human labor and accomplishment.”[8] In such a world, there is a bracketing of meaning.

Ratzinger responds by an analysis of creation sacraments. Existence is not reducible to the material but instead provides a horizon in which the human person is always ordered toward meaning. He writes:

The meal becomes a very penetrating interpretation of what it means to be a man, of human existence . . . In a meal man discovers that he is not the founder of his own being but lives his existence in receptivity. He experiences himself as someone who has been endowed, who lives on the unmerited gift of a fruitfulness that seems always to be waiting for him, as it were.[9]

The meal is not reducible to the material, precisely because the meal offers to the human person an understanding of existence that moves beyond the visible, beyond what is seen. The human person does not then escape into some eternal realm apart from the meal, moving beyond the biological act of eating. Instead, the human person experiences “the interpenetration of bios and spirit which is his inmost essence.”[10] Yes, the meal becomes a sign of divine life, of openness toward the primordial posture of gratitude that is integral to the human condition. But, it is not a sign that floats free from the corporal event of the meal. As he writes, “This divine element can meet him in no other way than in the sphere in which he has his humanity . . . through the medium of common humanity and corporeality.”[11] The human person passes into the divine through that which is most human.

The history proceeding from Christ with the belief that this is the saving history that opens up to man the historical context that truly allows him to live and leaves him into his true uniqueness—into the unity with God that is his eternal future.[12]

The sacramental economy, for Ratzinger, is thus not a neo-Platonic escape into some transcendent reality outside of time and space. Some apologists for Ratzinger attempt to employ the category of transcendence in assessing both his liturgical and sacramental thought, as if the purpose of liturgical prayer is to bring the human person into the eternal. This fallacy is a misreading of both the Augustinian sources and Ratzinger himself, since the Christian in via cannot escape biological and thus historical contingency. As he writes in his much misread The Spirit of the Liturgy:

The goal of worship and the goal of creation as a whole are one and the same—divinization, a world of freedom and love. But this means that the historical makes its appearance in the cosmic. The cosmos is not a kind of closed building, a stationary container in which history may by chance take place. It is itself movement, from its one beginning to its one end. In a sense, creation is history.[14]

Sacramental worship is not a form of Platonic escape from contingency. It is instead recognition that all that is material will be transfigured not through an abstract divine reality but the sacrificial love of Jesus Christ. In the act of worship, each person’s history is interrupted by the history of divine love of Jesus Christ. Ratzinger thus never leaves behind historical contingency. Each person will live the sacramental life in his or her context, becoming a living sacrifice to God.

Boeve, thus, misreads Ratzinger—applying a Platonic framework that does not exist within his work. Boeve does so because he hopes to create a space where the sacramental economy of the Church will not function as an ideology, one that maintains an abstract Christian identity apart from the other narratives of postmodern society. Ratzinger is careful to avoid such liturgical hegemony, noting that “Christian liturgy is liturgy on the way, a liturgy of pilgrimage toward the transfiguration of the world, which will only take place when God is ‘all in all.’”[15]

For Ratzinger, the “openness” of the narrative is given through the Pasch of Jesus Christ, the sacrifice of love that no individual Christian can hope to incarnate in its fullness within one’s lifetime. According to Ratzinger's writings, God has offered a metanarrative that has destroyed all other metanarratives, an ur-story in which sacrificial love alone is the meaning of existence. Such sacrificial love, made manifest in the eternal gift of love proceeding from the wounded heart of Jesus Christ, enfleshes itself in human history through fraternity, materiality, and corporeality. In this sense, Ratzinger offers an even more radical critique of sacramental ideology than Boeve.

Postmodernity was not the defeat of metanarratives, but the Incarnation was.

Editorial Statement: This reflection is an invitation to the McGrath Institute’s conference at Notre Dame celebrating the 50th anniversary of Introduction to Christianity. The event will feature many of the world’s preeminent experts in the field of Benedict XVI’s thought. Registration is still open. Posts will be collected here as they are published.