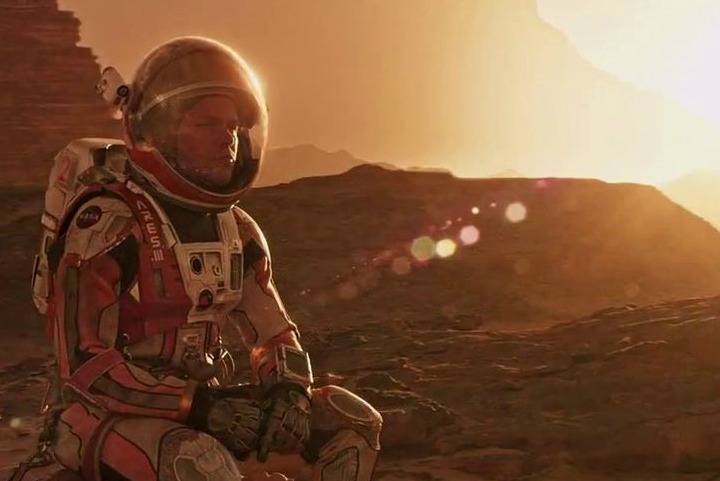 In her second season of Serial (the popular investigative journalism radio drama from the creators of This American Life), lead journalist Sarah Koenig says: “There has to be a limit on how much we will do for one person, on how much we risk—how much we give up—to get one person back.” Koenig is referring to the U.S. Army’s effort, and failure of effort, to rescue Bowe Bergdahl, a U.S. Army Private who walked away from his station in early 2009 and spent five years held captive by the Haqqani network in Iraq and Pakistan. While interviewing friends of Bergdahl and persons who worked within the Army infrastructure to advocate for prioritizing Bergdahl’s rescue, Sarah Koenig encounters this harsh fact: a human person does not always tip the scales when weighing the cost of their rescue.

Koenig’s words—“There has to be a limit on how much we will do for one person”—could perhaps serve as the anti-motto for Ridley Scott’s The Martian, which actively refutes the cruel ideology in which individual persons become expendable in the name of a collective cause by featuring multiple government agencies willing to spend billions of dollars on frail interplanetary rescue missions to save just a single man. At a pivotal moment, NASA Director Teddy Sanders (Jeff Daniels) upbraids Hermes Flight Director Mitch Henderson (Sean Bean) for conveying an unapproved rescue plan to the Hermes flight crew that would endanger the entire crew but offers the highest possibility of rescuing Watney. “This [space program] is bigger than one person,” Sanders intones. “No,” retorts Henderson simply, “it’s not.”

What supports this bold statement is not the force of any moral argument, or logical refutation. The film supports this simple riposte through its heartbeat: the importance of human relationship and the limitless ability of human empathy. The power that this film celebrates is not the technical wizardry of humankind, which can create vessels that traverse 50 million miles; it is the power of a human being to empathize and to suffer with another human being.

Filled with beautiful landscapes and stunning visuals of the mountainous landscapes of the Red Planet, The Martian is not lacking in any visual beauty. But the most eloquently beautiful scene occurs in the stark utilitarian interior of Watney’s Rover, where he is stooped over his computer screen. On the other end of the screen is his crewmate, Rick Martinez, corresponding with him for the first time. Martinez’s opening line to the crewmate and friend he left behind for dead, and who now faces almost certain death?

“Hey Mark. So NASA’s letting us talk to you now, and I drew the short straw. Sorry we left you on Mars. But we just don’t like you.”


Not exactly classically sympathetic language. In this moment, however, Martinez is offering to Watney something far more important than condolences. Their ordinary, ribbing banter brings a smile to Watney’s face. We get the sense that the burden of loneliness has been momentarily relieved. Separated by millions of miles, Martinez shortens the distance between himself and Watney through what he offers him in a few typed instant messages—a sweet morsel of normalcy in the midst of an alien landscape and the comfort of a human relationship that can remain constant despite circumstances and distance. He treats Watney not as a victim, casualty, or lost cause, but simply as a human. In doing so, he casts a lifeline to Watney, helping him remember his humanity in the crushing loneliness of the deserted planet.

Generally, human beings have limited stores of empathy. It is difficult enough to empathize with the people who surround you every day. It is much harder to extend that empathy toward people whom you cannot see, or with whom you have had limited contact (if any). I have such difficulty empathizing with the people whom I pass each day on the street as they ask for help, a handout, or a home. The Martian challenges me to ask myself whether I am able to sustain empathy for another human being. Just as I can walk past the man shivering on the Manhattan street corner, each member of Watney’s rescue team could have turned a deaf ear to the compunctions of compassion. While they might feel some pricks of conscience, or a surge of guilt, they would move on. Their lives would continue with relatively little interruption. And how easy that would be. But each of these characters refuses to give up, working to rescue Watney with an indefatigable drive as though they themselves had been left behind on Mars.

From the very first shot of the awe-inspiring horizon of the red planet, The Martian’s camera relishes its depiction of the vast scope of space, celebrating the far-flung distances that human beings can travel. Ultimately, however, the film celebrates the human empathy that shrinks those distances. The Martian offers us an image of the great feats that can be achieved when we refuse to believe there are limits to the risk we will take for a single person.

Renée Roden is a teacher and writer, working in East Harlem.